Hey pallies, likes I was so intriqued when my Dino-googlin' landed by at a pad tagged "Smoking At The Movies".....with a tag likes that this had to be likes a way hip site. Well what I found when I landed there was a lady with the handle "notatypicalmom" who while in the midst of talkin' 'bout a swingin' family party in the Poconos, lets her readership in of the fact that her fav western is "Rio Bravo."

"notatypicalmom," know in real life as Kari Wagner-Peck shares some very interestin' insights into "Rio," includin' the notion that "the film has the feel of a stage play." Likes I found that very very insightful. But, likes of course Miss Wagner-Peck's most insightful insight focuses squarely on our most beloved Dino (not that our Dino woulda ever be considered square!).

Miss Kari pontificates, "Wayne is the star of this film but the story to watch is Dean Martin’s." And likes pallies o'mine...ain't that the complete, the total Dino-truth. While John Wayne is the obvious "star" of "Rio," all of the flick's actions center truly truly on our Dino! So so cool to find this "notatypicalmom" with such an great attraction to our great man.

Usually pallies, likes we finds men who are doin' the reviewin' of "Rio Bravo," and thus it is so refreshin' to find a chick's perspective on this amazin' Dino-tale! Hats off to Miss Kari Wagner-Peck for sharin' this Dino-centered post with all her readership...sure to help others to a deeper and truer understandin' of our Dino!
To read this in it's orginal format, likes just clicks on the tag of this here Dino-gram. Dino-sharin', DMP

Posted on November 7, 2011 by notatypicalmom

This weekend we went with most of my husband’s family to a resort in the Poconos paid for generously by my mother-in-law on her 75th birthday. Saturday night was ‘Hoedown Night’. Cowboy hats and kerchiefs provided by the lodge. My husband put on a hat and wore the kerchief bank robber style. A few thoughts came to mind. First, my husband is super hot. Second, it is nearly impossible to play “dangerous bank robber ala Robert Redford and shy schoolmarm ala Kathryn Ross” in Butch Cassidy and the Sundance Kid (1969) with a five-year-old underfoot. Third, I love westerns. 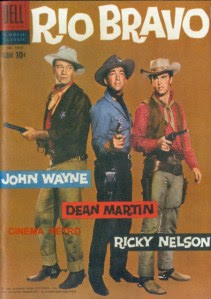 My favorite western isn’t the typical riding the range kind it’s Rio Bravo (1959, directed by Howard Hawks) starting John Wayne, Dean Martin, Walter Brennan and Ricky Nelson. (And – a supporting role by one of the Kings of the Westerns – Ward Bond.)

The film has the feel of a stage play with majority of the action taking place in the jail between the main characters mostly taking to each other: John Wayne, the sheriff (and former gunslinger) Chance; Walter Brennan, the cranky, “crippled”, old codger deputy who calls ‘em as he sees ‘em Stumpy; Dean Martin, the deputy with a drinking problem Dude; and, Ricky Nelson, the hot-shot kid gunslinger-for-hire Colorado Kid.

Within the first few minutes, Wayne’s, character Chance arrests the no-good brother (played by Claude Atkins) of a ruthless, wealthy rancher. The drama then becomes what will happen to this rag tag group lead by Chance when the brother sends an army of gunslingers to free his kin. 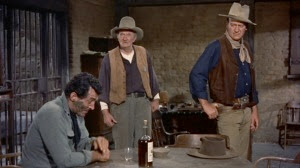 Wayne is the star of this film but the story to watch is Dean Martin’s. His character Dude is a drunk who because of his drinking puts things into motion and because of his stopping drinking helps put things right. His is the redemption story. (I don’t need redemption in a film but when it is done well it sticks with you. This stuck.)

As the four wait for the inevitable show down with the hired guns and as tension and fear builds the men talk a lot about what stuff means in this world – this is also called ‘character development’ which I miss in films now days. A Hawks strong suit, given free reign here – are that thoughts and emotions can be conveyed with just looks and other subtle human actions. (The pain on Wayne’s face as he watches Dude struggle to regain his tattered dignity.)

The men – three of them old friends – know they only have themselves to rely on in this mess. To kill the time as they wait – they clean and sing songs (thanks to the talents of Martin and Nelson). They look out for each other, they talk about their feelings, life philosophies. They rag on each other. In other words, they care about each other. I think Hawks threw the sexy girl character Feathers in played by Angie Dickinson solely as a catalyst for these men to talk about love and honor and respect. 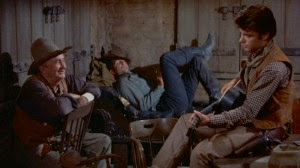 It is a talky for a western. But, I like that. The only thing sexier than my husband dressed as a cowboy is when my husband tells me what he thinks and feels.

And, don’t worry there are plenty of kick ass scenes of the shoot-em-up-kind. Each of them gets their licks in and it is awesome.
Posted by dino martin peters at 7:07 AM

Thanks for the kind words and the plug! The only night I was allowed to stay up past my bedtime was to watch The Dean Martin Show. And - my sister and I loved his Matt Helm movies!!! He was just so cool.

Thanks for the kind words and plug! The only night I was allowed to stay up past my bedtime was the night The Dean Martin Show was on. And- my sister and I loved the Matt Helm films! Love your blog.

Hey pallie, likes Miss Kari, you are most most welcome...we calls it showin' true Dino-palliedom 'round these parts....know that I tried a couple of times to leave a comment at your blog...but likes for some reason was not able to...cool to know your fam was in the Dino-know lettin' you stay up to gets your shot of our great man! Hopes you will stop by often to enjoy the Dino-difference here...and, of course, likes keeps lovin' our Dino!