To us it is our most beloved Dino at his coolest, hippest, and randiest....the swingin' seventies Dino....delightfully demonstratin' his personal persona completely coolly congruent with his performance persona as stellar stunnin' swinger extraordinaire. 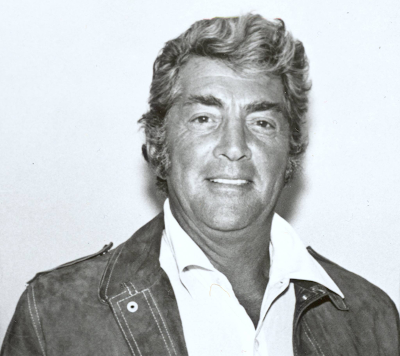 Hey pallies, likes this Dino-day we are fabulous fully full to the Dino-brim with the deepest of deepest Dino-delight!  Likes ever since we got a groovy glimpse of this, this swankest of swank, intensely incredible image of our Dino (above) when we virtually  viewed it as part of a Dino-tune vid over at youtube, likes we have been searchin' Dino-high and Dino-low to find a copy of this Dino-pose to sweetly share with all youse Dino-philes here at our humble little ilovedinomartin waterin' hole.  To us it is our most beloved Dino at his coolest, hippest, and randiest....the swingin' seventies Dino....delightfully demonstratin' his personal persona completely coolly congruent with his performance persona as stellar stunnin' swinger extraordinaire.

Well as youse can supremely see, we have finally been sweetly successful in our Dino-search.  For now we will simply say that someway somehow our Dino lovin'ly led us to a facebook Dino-trib pad where this intensely intriguin' image of our King of Cool was just waitin' to be found 'mong all the Dino-poses in the Dino-diggers Dino-albums.  And, likes Dino-holics, not only did we get Dino-gifted with this Dino-pix, but likes we also found the Dino-pose below right next to it. 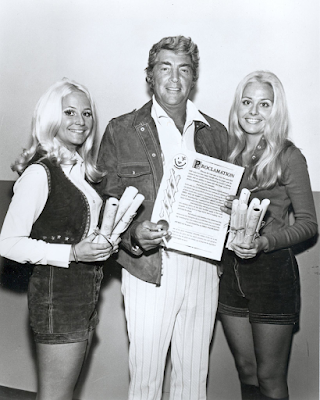 Likes youse can see that it  was swankly snapped at the same time as the first Dino-pose, but it has our most most beloved Dino with his ever present Kent cigarette in hand with two lovely young beauties fully flankin' either of his sides and our Dino is perfectly proudly holdin' some sort of proclamation in his hands. Well, of course, likes we have become completely curious of what is scribed on that piece of paper, but we have not been able to enlarge the Dino-image large enough to read it and we have search the 'net to try and find other pads where this Dino-pose is bein' exhibited, but so far we have come up empty handed.  SO, LIKES IF ANY OF YOUSE DINO-PHILES KNOWS ANY OL' THIN' 'BOUT THIS DINO-MYSTERY, PLEASE, PLEASE SEND US SOME DINO-PATTER.

And, likes below is the Dino-tune vid from youtube where the first incredible image of our Dino is, of course, the intriguin' image that heads the top of this Dino-gram...the Dino-croon is "Just The Other Side Of Nowhere," and we find that absolutely awesomely appro as "Nowhere" was exactly the place...or lack there of.... we were goin' 'til we were Dino-directed to that facebook Dino-tribute pad where the first Dino-image was located.  Nowhere is still the place...or lack there of...as far as our lack of Dino-success in findin' the second Dino-pose.

Dean Martin - Just The Other Side Of Nowhere

Definitely diggin’ the 70s Dino pic! Most swingin years for our pal. Good luck gettin’ the scoop on the paperwork he’s holdin’. If anyone can figure it out it’s you pal!

Hey pallie, likes Danny-o, likes did we know youse woulda be "definitely diggin'" this Dino-photo?!?!?!?! Likes thanks for your good wishes for the gettin' the Dino-scoop. Likes if we were Dino-guided to these Dino-poses we are trustin' that at the right Dino-time the Dino-info we will be lead to.