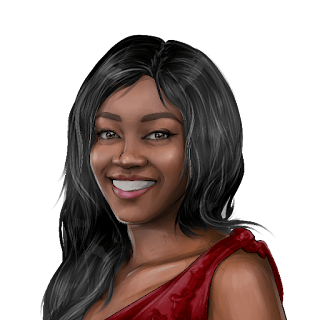 Hey pallies, likes we gotta frankly, fondly 'fess up that we are bodaciously beyond the moon over the fab fact that our most beloved Dino keeps makin' huge huge headlines over 25 years after his departure from our planet.  Likes the latest greatest extraordinary example of such sweet stuff is today's Dino-report from the new-to-ilovedinomartin pad, "AmoMama."  Likes there archives tells us that "NEWS.AMOMAMA.COM! Our multimedia platform, which was launched in 2017, aims to magnify the voice of women across the world."
Likes the lovely young lady who wrote today's delightful Dino-devotion, "Dean Martin’s Son Dean Paul Died in a Plane Crash Leaving behind a Child Who Is Grown up and an Actor Now" is tagged Olowokandi Fivin (whose portrait is on the right side of this Dino-gram)  hails from Lagos, Nigeria and her intro swankly states, "Her smile is enough to knock you off your feet but Fiyin will really blow you away with her masterful flair with words. She has a built-in ability to relay information in a graceful and elegant manner that draws readers into her work."
How totally totally thrillin' it is to see 'nother of today's up and comin' youthful professional scribers powerfully puttin' the awesome accent on our Dino and it makes us likes  'specially potently psyched that Miss Olowokandi hails from the West African nation of Nigera, reverently remindin' us that the amazin'ly awesome adulation of our most most most beloved Dino knows no bounds.....the beloved name of our Dino and his life, times, and legacy is still bein' proudly proclaimed all 'round the Dino-globe.  And, likes with nouveau hipsters likes Miss Fivin usin' their time and talent to spread the Dino-story just means that the Dino-light is growin' and  glowin' ever brighter and ever farther with each and every Dino-day!
Likes the touchin' and tender trib to our Dino shared below is really 'bout not only our main man, but also his boypallie namesake Dino Jr. and our Dino's grandboypallie Alexander as well.  We only found a couple of errors in Miss Fivin's retellin' of the Dino-story.  She states that Dino Jr. was " Dean's oldest child," and all us Dino-philes know that our Dino had four older children with his first wife Betty.  Dino Jr. was the first child of his second marriage to Jeanne.  Also she misstates that Dino Jr.  "was first married to Olympic skating champion Dorothy Hamill. After the two divorced, he got involved with actress Olivia Hussey." Likes all us Dino-diggers knows that the marriages were the other way 'round.
Otherwise the Dino-facts are right on the Dino-mark.  The Dino-essay is a groovy glimpse into the our Dino, his beloved boypallie namesake and his grandboypallie as well, with an awesome accent on Dino Jr.'s son, Alexander, who as you will read has followed in both is daddy-o's and granddaddy-o footsteps.  Likes for u,s the primo-est of the primo  part of this Dino-devotion is the sharin' of the youtube vid of grandboypallie Alexander speakin' 'bout our Dino's legacy upon Alexander's bein' greatly gifted with acceptin' in 2019 the Grammy lifetime achievement award of our King of Cool.
We gotta 'fess up that hearin' Alexander speakin' so energetically and eloquently 'bout his granddaddy-o makes our Dino-heart beautifully burst with profusely powerfully potent pride in bein' one of those who have been warmly welcomed into our Dino's world and given the perfect privilege of spreadin' Dino-devotion as Dino-far and Dino-wide as we are able to.  So, Dino-holics, youse must stop and take the time to imbib in Alexander's wise words of Dino-awe via the youtube vid.
ilovedinomartin swankly salutes Miss Olowokandi Fivin and all the pallies at "AmoMama" for spreadin' their special brand of Dino-devotion far and wide to all their remarkable readership.  Likes to read this in it's original context and to view a perfect pix of Alexander, and younger bro and their mother Miss Olivia Hussey, simply clicks on the tag of this Dino-report.
We Remain
Yours In Dino,
Dino Martin Peters

Entertainer and comedian Dean Martin lost his son, Dean Paul, in a tragic plane crash. Paul left behind a son Alexander Martin, who is all grown and has taken in his father and granddad's footsteps.

Dean Martin's son Dean Paul Martin, a pop singer, and actor passed away in a fatal plane crash during a military training flight on March 21, 1987. Paul was 35 at the time of the accident.

The wrecked jet was found in the Eastern area of Wood Canyon in Riverside County. Paul's and Ramon Ortiz's were the only bodies the rescue team found on a San Bernardino mountain.

Paul, who is is Dean's oldest child started his career in the entertainment industry when he was 14. Paul and Desi Arnaz Jr., the son of actor Desi Arnaz and Billy Hinsche, formed a rock band.

Alexander's grandfather was honored with the lifetime achievement award and Alexander represented the late actor.

Paul was first married to Olympic skating champion Dorothy Hamill. After the two divorced, he got involved with actress Olivia Hussey. During his marriage to Hussey, the couple welcomed their son, Alexander Martin. 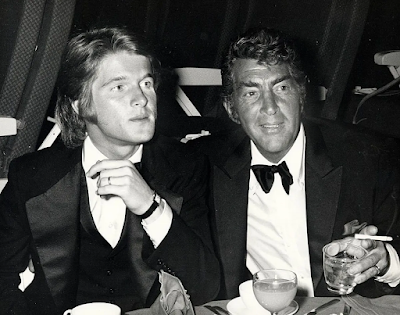 Dean Martin and son Dean-Paul Martin at the premiere party for 'Airport on March 19, 1970 in Hollywood, California

Reports showed that Paul's jet plunged about 4,000 feet from its last height and crashed on a mountain at about 400 miles per hour. A different report showed that there was no indication of malfunction with the plane.

During the initial stage of the search, the rescue team was unable to find the missing plane. The search party remained hopeful and assumed that Paul and Ortiz could have escaped through parachutes.

However, their hopes died when they discovered the aircraft in a shattered state. Paul was excellent at all his career choices. He joined the Air National Guard in 1980 and got his first helicopter pilot license while he was 16.

After Paul's painful death, his family and loved ones were left in total disarray. His father, other family members, and some friends honored the pilot in private military service.

Amongst the over 200 people who attended the funeral ceremony at Los Angeles National Cemetery in West Los Angeles were Jerry Lewis, Davis Jr., and Frank Sinatra.

On February 12, 1973, Alexander was born in Los Angeles, California, and took in his father and grandfather's career path as an actor. In 1998 he starred in "Can't Hardly Wait," in 2001 "Josie And The Pussycat."

The star also made remarkable appearances in 2000's "21." He tied the knot with his sweetheart Megan W. Martin on October 22, 2011. Since their marriage in 2011, the couple has expanded their family with one son.

ALEXANDER WITH THE FAMILY'S LEGACY

In 2019, Alexander's grandfather was honored with the lifetime achievement award and Alexander represented the late actor for the event. The grandson acknowledged Dean's hard work on a YouTube clip of the red carpet for the 51st Grammy Award.

Alexander noted that his grandfather made his time in the entertainment world look easy. The grandson noted that Dean performed effortlessly. According to Alexander, some had told him that Dean had about 750 records, 60 films, and two decades on TV.

Hey pallie, likes Danny-o, can't stop the Dino-wave, and likes who in their right Dino-mind woulda wants to?!?!?!