Dean Martin sings like an angel. And this came upon me in a blinding flash of light 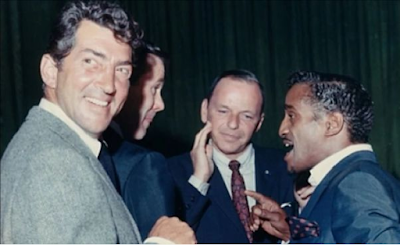 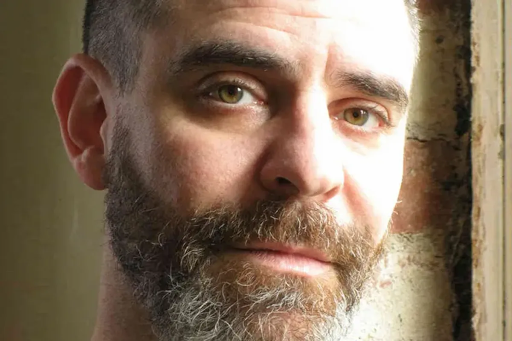 Hey pallies, likes today is one of those truly truly beautifully bittersweet days here a ilovedinomartin.
Like beautiful 'cause we are once 'gain powerfully privileged to share with all youse Dino-philes some of the most  perfectly primo of primo prose supremely scribed by yet 'nother pallie whose potent perspective of our most beloved Dino was totally totally transformed from dissin' to diggin' our King of Cool as he watched the  "1965 kinescope of a benefit concert by Frank, Dean Martin and Sammy Davis Jr., hosted by Johnny Carson -- allegedly the only known video recording of an entire Rat Pack performance."
Likes bittersweet 'cause we only recently were Dino-led to this Dino-treasure, likes over 24 years after it was first place in print on June 13, 1997 and almost 9 years after the writer died on August 9, 2012.
Likes we are totally totally thrilled to share with you how Mr. David Rakoff (pictured on the left above) received his Dino-transformation, but 'specially sad to do so after his passin' from our planet.
Today we share with youse Mr. David Rakoff's extraordinary essay, "The  Wizards Of Id"  wonderfully written for the pallies at "Salon"  Mr. Rakoff was "a prizewinning humorist whose mordant, neurotic essays examined everything from his surreal stint portraying Sigmund Freud in a Christmastime shop window display to his all-too-real battles with cancer"   David died of cancer at the age of 47 in Manhattan.   We also discovered that  "Rakoff was an essayist, journalist, and actor, and a regular contributor to WBEZ's This American Life. Rakoff described himself as a "New York writer" who also happened to be a "Canadian writer", a "mega Jewish writer", a "gay writer", and an "East Asian Studies major who has forgotten most of his Japanese" writer."
As we stated 'bove, David's Dino-testimony is included in his wise words below. We have only included his introductory paragraphs and how he received his total transformation from Dino-dissin' to Dino-diggin'.   If you only want to read of Rakoff's Dino-transformation, we have put parentheses 'round it.  If youse want to read his thoughts on Mr. Davis Jr.'s performance and Mr. Sinatra's, simply clicks on the tag of this Dino-gram.
We ain't gonna take any glory 'way from his Dino-profession 'cause all youse Dino-holics need to imbibe  it for yourselves.  Might we just say that we ain't often been as magnificantly moved by a pallie's Dino-profession as we have been by David's....which goes deeply deeply to our Dino-heart and brings us the greatest of great Dino-happiness.  Likes what coulda be more movin' then hearin' the complete change of heart that Rakoff had for our most beloved Dino after watchin' his Dismas House performance.
Likes, of course, our greatest of respect regret that we share this long after it was first published and long after Mr. Rakoff's death.
Posthumously, we sweetly salute Mr. David Rakoff for his Dino-testimonal, which we are coolly certain has brought many many of his remarkable readership into the Dino-fold over the last more than two Dino-decades.    And, pallies, note the color picture at the top of this post from the Rat Pack concert (one that we ain't ever laid our eyes on before) and the inclusion of the youtube vid of the vintage concert for your Dino-viewin' pleasure at the end of this Dino-gram.
We Remain,
Yours In Dino,
Dino Martin Peters
btw pallies, we just searched our awesome archives of Dino-gram and we noticed that on Otober 17 in the year of our Dino 2015 we briefly shared 'bout Mr. David Rakoff's Dino-devotion that you can find
HERE.  Today we are thrilled to share the rest of his Dino-transformational story.

The Wizards of Id

Lifestyle features have heralded the Return of the Swinger and the End of Moderation for the better part of two years now. Apparently, collectively weary from decades of having to watch what we eat, smoke, drink and most especially say, "we" are returning to a simpler time of boomerang coffee tables and pupu platters. A time when, at worst, "Mad Cow" was a frothy drink for the ladies. A time when chicks knew how to shut up and cats "swung." Think back to the old "What kind of man reads Playboy?" ads; high fidelity systems, scotch, Sulka dressing gowns, the work of Leroy Niemann, etc.

Restaurants featuring smoking areas with cute, retro names like the Havana Room -- I'm still waiting for the Missiles of October Lounge -- are springing up like mushrooms, or rather, metastatic tumors. Even my formerly staid neighborhood, once the elegant home to Washington Irving, New York's only private park and the charmingly prim National Arts Club, is rank with the smell of the Death of Restraint: prime rib, Bombay Sapphire, Ketel One, tobacco and, of course, the unfortunate result of all of these at the end of a long evening, vomit.

I hate the Nouveau Swingerati. I will freely admit it. I quite enjoy a good martini, and will occasionally still take one in the privacy of my own home, although I'd sooner eat glass than be seen drinking one in public. I am also fairly obsessed with Frank Sinatra. I know the words to most of his songs and can emulate the phrasing on the important recordings more than passably well, not to mention sing both the Betty Garrett and Frankie parts of "Let's Go to My Place" from "On the Town," thank you very much. But you won't catch me out in public singing "Angel Eyes" while swirling an olive through my gin.

Swingers have ruined my life. The martini is now tied with the cell phone as the leading semaphore for "Hello, I'm a schmuck." (The cigar, it should be noted, is something entirely more direct than a mere semaphore). And my beloved Frank has been co-opted as the god of Cool by precisely the kind of thick-necked douche bags I've spent my entire life assiduously avoiding. Not yet even dead, Frank hovers, shimmering perpetually above us all, like a beacon, like Noah's Dove.

So, it was with a mixture of trepidation and the anticipatory bloodlust of a hatchet job that I went to the Museum of Television and Radio to see "The Rat Pack Captured," a 90-minute version of a recently discovered 1965 kinescope of a benefit concert by Frank, Dean Martin and Sammy Davis Jr., hosted by Johnny Carson -- allegedly the only known video recording of an entire Rat Pack performance.

the audience at the museum on the rainy Saturday turns out not, however, to be made up of the Date Rape-oisie at all. For the most part, we are men and women of a certain age who have come to see the boys sing. The evening is opened by a startlingly young Johnny, at that time only three years on the air, who explains a bit about the Dismas House of St. Louis, a facility for ex-offenders for which this event is a benefit.

(And then comes Dean Martin. I brace myself, having never liked his boozy persona. He is a caricature of dissipation; shiny-faced, eyes lowered to half-mast, beatifically stoned. But boy, is he adorable. Imagine my surprise that I come to you now as a prophet of the Church of Dino.

Dean Martin sings like an angel. And this came upon me in a blinding flash of light: In the same way that, despite the seemingly extemporaneous ease with which Fred Astaire danced, we all know he rehearsed doggedly, I realized Dean isn't really a drunk asshole! Actually, there's nothing assoholic at all about his drunk act.

Unlike with his former partner and icon of the French, Jerry Lewis, you're not waiting for the vicious undercurrent. Dino smiles in a vaguely surprised, ain't-this-nifty way throughout his set, as if the music pouring out of him was not of his doing at all. Something else he shares with Astaire is a vocabulary of the tiniest physical gestures. While singing "King of the Road," that pre-hippie '60s anthem to barefoot, boho insouciance, he gives it a nice little gender-fuck by punctuating a riff with a lock of the torso, a cant of the head, his wrist a relaxed teapot handle, and singing, "Queen of the Road." At a time when gay-baiting humor relied on the wide swish and the hostile mince with the unspoken promise of ultimately kicking someone's faggot ass, Dean, for just an instant, makes a surprisingly sympathetic and counterintuitively convincing bottom. I sit there, homo that I am, charmed and unoffended.

By the time he finishes his set and brings home "You're Nobody 'Til Somebody Loves You," he does so with such a touching sincerity that I am thinking to myself, "Yes, Dean. So true, so true. I am nobody.")

Man! Great read from our fellow digger of Dino, Dave. Kinda melancholy ...Kinda sad...but VERY cool. I truly believe the only people who don’t love Dean are the ones who refuse to give him a try. One flick, show, or tune...& youse is hooked! Then you inevitably find yourself goin’ Ohhhhh now I get it! Ha! You’ve been Dino-fied!