Dean Martin: The Rat Pack Star And Amateur Boxer Who Was Afraid Of Elevators 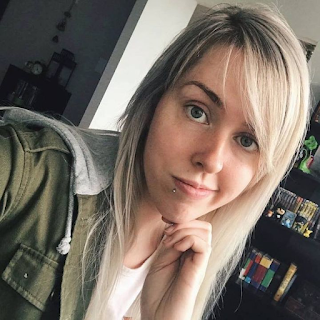 Hey pallies, likes welcome back once 'gain this very Dino-day  to our Dino-centric blogger pad where we  proudly proclaim "I LOVE DINO MARTIN."  Likes we loves our one and only Dino and we LOVES! LOVES! LOVES! sharin' our absolute amore for our Dino with Dino-philes all over the Dino-universe.  Likes we mainly gets our Dino-devotion by sweetly scannin' the ol' world wide web for primo pads where our King of Cool gets energetically exalted by others who share our perfect passion for our Dino.

Likes recently our Dino-searchin' led us to a new-to-ilovedinomartin bountiful blog tagged "The Vintage News" where one of today's youth, Miss Claire Fitzgerald (pictured on the right), a fantastic freelance journalist and wondrous writer has coolly crafted her delightful Dino-essay, "Dean Martin: The Rat Pack Star And Amateur Boxer Who Was Afraid Of Elevators."   Miss Fitzgerald's stated thesis is to swankly share "some facts you may not have known about him."  Claire has  certainly done her Dino-homework usin' her  supreme scriber skills to share perfect prose and potent pixs makin' for a thoughtsful tribute to our one and only Dino.

Likes we are always always marvelously moved to find yet 'nother of today's greatly gifted youth energetically employin' their stunnin' skills to help others grow deeper in their keen knowledge and reverent respect for our Dino and truly truly Miss Fitzgerald has awesomely accomplished this Dino-task.   We gotta 'fess up that we largely loves the vibrant variety of Dino-details that Fitzgerald has coolly collected for our Dino-edification and we absolutely  appreciate the coolest of cool collection of primo poses that awesomely accent her wisely written words.  Indeed there are a fabulous few Dino-images that we don't ever remember layin' our eyes on before and our fab fav of fab fav is the first Dino-pose is our Dino as swingin' spyster Matt Helm with that groovy glance that only our Dino can create as he holds up al-b-um covers from on of his rad records and one from his pallie Mr. Frank Sinatra.  To our Dino-mind is that that swankest of swank Dino snapshot is well worth Claire's extraordinary efforts in the cause of our Dino.

ilovedinomartin shouts out our absolute appreciato to Miss Claire Fitzgerald and all the pallies at "The Vintage News" for this fantastic feast of Dino-devotion that surely surely will bring many many more pallies into the Dino-fold.  To checks this out in it's original source, likes simply clicks on the tag of this Dino-report.

Dean Martin: The Rat Pack Star And Amateur Boxer Who Was Afraid Of Elevators 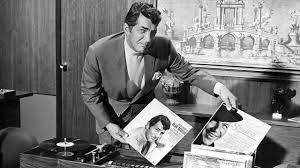 Rat Pack legend and comedian extraordinaire Dean Martin was a Hollywood staple. His witty antics and voice made him one of the most popular entertainers around, and he rubbed shoulders with Tinsel Town’s finest. Here are some facts you may not have known about him.

What’s In A Name?

He wasn’t always known as Dean Martin. Like many in Hollywood, his iconic moniker was actually a stage name. Martin was born Dino Paul Crocetti. He changed his name when he first came into the spotlight, going by Dino Martini, after the opera singer Nino Martini. 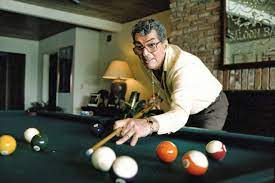 The comedian playing pool at his Beverly Hills home

In 1940, bandleader Sammy Watkins suggested he change his name, so people wouldn’t confuse him with the famous singer. From then on, he was known as Dean Martin.

Before he was known for his comedic genius and musical talent, Martin was a boxer, albeit an amateur one. He became a welterweight at 16, and held a record of 25-11. He boxed under the name “Kid Crochet,” and once joked he’d won 11 out of the 12 professional fights he was in.

The job didn’t pay well and Martin often struggled to scrape together enough money to buy tape for his knuckles. This resulted in a slew of injuries, including a scarred lip, a bruised body, busted knuckles, and a broken nose. 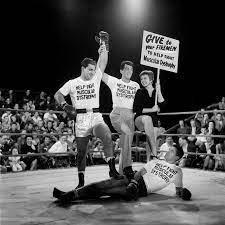 While living in New York City with Sonny King, the two reportedly charged people to watch them bare-knuckle fight each other at their apartment. They fought until one knocked the other out, foreshadowing Martin’s eventual win over King during the first round of an amateur boxing match.

It’s said Dean Martin only read one book during his life, Black Beauty. That doesn’t mean he didn’t dabble in other forms of literature. In fact, he loved comic books. Afraid that being seen buying them would hurt his “King of Cool” persona, he often had his friend and frequent collaborator Jerry Lewis buy them for him. 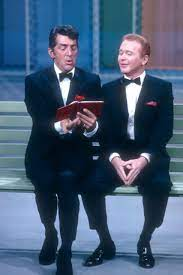 He Wasn’t Actually A Boozehound

A large part of Martin’s public persona was his love of alcohol. His comedy series, The Dean Martin Show, exploited this image, and his convincing portrayals of drunkards in Rio Bravo and Some Came Running only further fueled rumors of alcoholism. He even had a vanity license plate that read “DRUNKY.” 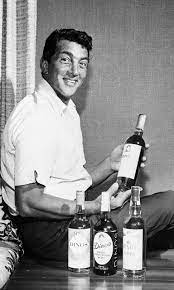 What many might not realize is it was all an act. In truth, Martin was a disciplined drinker who simply borrowed the “loveable drunk” shtick from Joe E. Lewis. He was often the first one to call it a night, preferring a good rest to ensure he was ready for golf in the morning.

As for the drinks he held when performing on stage? According to his son, Dean Paul Martin, the glasses were usually filled with apple juice.

Dean Martin was the child of an Italian immigrant father and an Italian-American mother. Despite growing up in Ohio, he spoke only Italian until the age of five, when he began school. His broken English made him the target of bullies at Grant Elementary School, where he was a student. 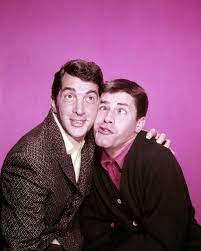 It turns out school wasn’t for Martin, who dropped out in grade 10 due to the belief he was smarter than his teachers. That definitely wouldn’t fly nowadays…

Plastic Surgery Is So Hollywood

Martin is one of the many Hollywood stars who have gone under the knife in the name of beauty. When he was 27 years old, he underwent a rhinoplasty, which was reportedly paid for by comedian Lou Costello. The doctors straightened his nose and narrowed its bridge, but many couldn’t notice a difference when all was said and done. 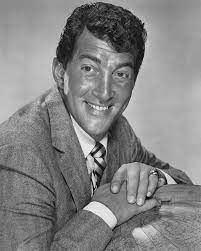 Explanations differ as to why Martin decided to have work done. Some believe it was because of the injuries he suffered during his boxing days, while others claim he simply didn’t like the way it looked.

His Son Died In A Plane Crash

Dean Paul was Martin’s son via his second marriage. While he dabbled in singing and acting, his true passion was flying. At 16, he obtained his pilot’s license, and in 1980 became an officer with the California Air National Guard.

He entered active duty for officer training under the U.S. Air Force’s Palace Chase Program and was later commissioned as a second lieutenant. He went on to complete his Undergraduate Pilot Training at Columbia Air Force Base. From there, he was transferred to the California Air National Guard 196th Tactical Fighter Squadron, 163rd Tactical Fighter Group. 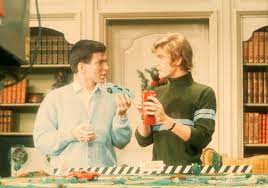 On March 21, 1987, Dean Paul and weapons system officer Captain Ramon Ortiz departed from March AFB in an F-4C Phantom II. It was supposed to be a routine training mission in the San Bernardino Mountains, but a snowstorm blew through and the plane crashed into San Gorgonio Mountain. Both men were killed upon impact.

Why Rehearse When You Can Play Golf?

Most in the entertainment industry need to rehearse to put on a good show, but not Dean Martin. He hated rehearsing, especially for his variety show. It’s no surprise, then, that the contract he signed in 1968 had a rather unique clause. 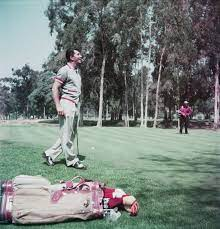 Dean Martin on the golf course

When Martin signed his $34 million contract to do three more seasons of the show, one of the clauses stated he didn’t have to show up to rehearsals. He instead spent this time on the golf course, while someone stood in for him. When Friday rolled around, he arrived on set and taped the show.

Martin is said to have been terrified of small, closed-in spaces. One of his biggest fears was elevators, which he called “coffins.” He was so afraid of them that he once opted to walk up 18 flights of stairs instead of riding in one. 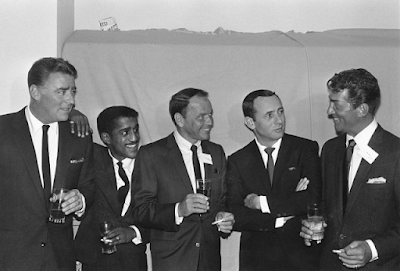 It was a stipulation that he have a room on the first floor when staying at hotels to ensure he never had to enter an elevator.

Dean Martin was a heavy smoker for most of his life. By 16, he was chain-smoking, and he often couldn’t go on stage without a drink in one hand and a cigarette in another. He continued to smoke until he was 76, even after showing signs of COPD in his early 60s.

His cancer diagnosis in September 1993 forced him to give up the habit. As the illness progressed, doctors at Cedars Sinai Medical Center told him the only way to prolong his life expectancy would be to undergo surgery on his kidneys and liver. He declined. 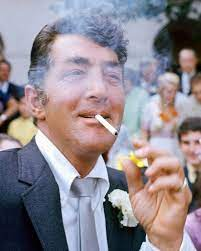 Martin retired from public life in early 1995 and succumbed to acute respiratory failure on Christmas Day of that year. In his honor, the lights were dimmed along the Las Vegas Strip.

Claire definitely does an “excellente” job on summin’ Up some major points in the life of our main man. And I ‘gree with youse, pal, ‘bout how cool it is to see the younger generations diggin’ on Dino...just as we do!

Hey pallie, likes Danny-o, with nouveau hipsters like Claire awesomely accentin' our most beloved Dino we knows that the marvelous message of our Dino will continue to be spread and more and more pallies will continue to always be warmly welcomed into our Dino's world and filled with the happiness that only our Dino can bring.