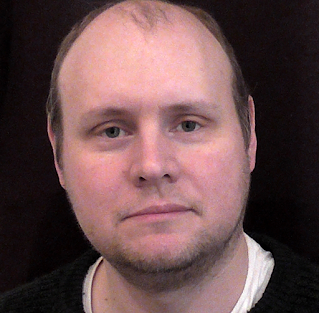 Hey pallies, likes welcome back all youse Dino-philes for 'nother wonderful week of groovily gatherin' 'round our intimate ilovedinomartin pad where we lovin'ly lift up the life, the times, and the teachin's of our most beloved Dino through sweetly sharin' Dino-devotion from all over the Dino-web from all over the Dino-universe.
Likes after sharin' yester-Dino-day's perfect prose from the new-to-ilovedinomartin blog "The Vintage News," we did our ubber usual swank scourin' 'round that beautiful blog in hopes of uncoverin' more Dino-admiration and, yes pallies, we are perfectly pleased to state that we did uncover more marvelous Dino-focused prose to bring forth for youse Dino-holics Dino-readin' pleasure.
Today we share with you "The Vintage News" radiant review of the team Martin and Lewis as stunnin'ly shared by Brit author Mr. Steve Palace (pictured on the left above).  Steve "is a writer, journalist and comedian from the UK. Sites he contributes to include The Vintage News, Art Knews Magazine and The Hollywood News. His short fiction has been published as part of the Iris Wildthyme range from Obverse Books."
Likes we thoughtfully thinks that it is perfectly perfecto primo to have a cool comedian likes Mr. Palace take on the touchin' and tender task of  gracefully givin' their impeccable insights into the coolest comedic team of all time...our most beloved Dino and his most beloved partner, Mr. Jerry Lewis.
The tag of his excellent essay is "Dean Martin and Jerry Lewis – The Comedy of an Era and Enduring Brotherly Bond," as as you can see, Steve puts the awesome accent on, as he sez, the "Enduring Brotherly Bond" that our Dino and Jerry sweetly shared.
We loves absolutely everythin' that Palace chooses to use to energetically exalt the team of our Dino and Jerry....we loves the potent pixs that he has gathered, we loves the way that he has reverently researched what others have wisely written includin' perfect prose from the "New York Times," the "Guardian," and the "MEL Magazine."  Likes everythin' 'bout Steve's supreme salute to our Dino and Jerry is totally totally top drawer.  We 'specially deeply digs these intriguin' insights...
"What was the secret of their joint success? Martin and Lewis relied on each other like family, and were sometimes jokingly characterized as a married couple."
"A combination of mutual admiration and aggravation created a chemistry that audiences lapped up, whether on stage at the Copacabana club in New York or wowing the nation during the Colgate Comedy Hour."
"Lewis and Martin’s affection for each other had been soured by the limelight, yet that love was reflected a thousandfold in the country."
"In a sense what they had was a love affair, albeit a platonic one. Jerry Lewis and Dean Martin’s relationship kept the world laughing in the post-war period and went on to inspire many with their genuine connection."
It is crystal clear how much awesome affection that Mr. Steve Palace has for the greatest comedic team of all time, our most beloved Dino and his most beloved partner, Mr. Jerry Lewis.  Palace's deep devotion to our Dino's ten year remarkable run with Mr. Lewis supremely shines through in how Steve has coolly crafted these reverent reflections.  ilovedinomartin sez our absolute appreciato to Mr. Steve Miller and all the pallies at "The Vintage News" for sharin' this primo piece with the larger Dino-world.
To checks this out in it's original source, likes simply clicks on the tag of this Dino-report.
We Remain
Yours In Dino,
Dino Martin Peters 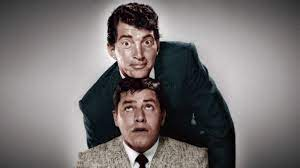 They’re often overlooked in the grand scheme of things, but back in the 1940s and 50s Dean Martin and Jerry Lewis were a showbusiness phenomenon.

A rapid rise to fame led to TV appearances and movies, which kept them at the top for a decade.

What was the secret of their joint success? Martin and Lewis relied on each other like family, and were sometimes jokingly characterized as a married couple.

A combination of mutual admiration and aggravation created a chemistry that audiences lapped up, whether on stage at the Copacabana club in New York or wowing the nation during the Colgate Comedy Hour. 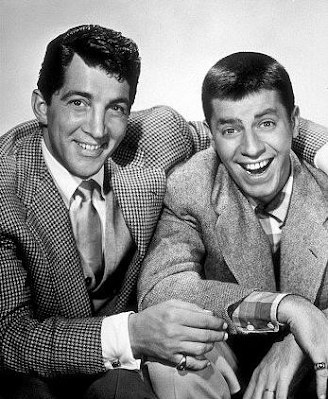 The double act was formed as much by accident than design. Lewis met Martin in 1945, as he was exiting his teens.

Crooner Dean was 9 years older and under contract to MCA. His assured style made an instant impression on Lewis and a younger brother/older brother dynamic was formed. 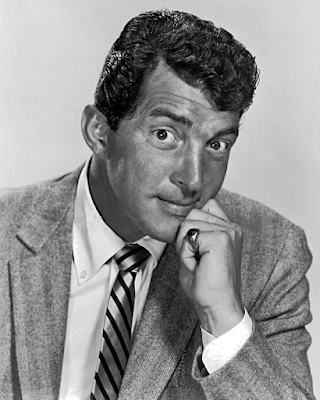 Original studio publicity photo of Dean Martin for the film Bells Are Ringing (1960).

To get his attention while on the same bill, Lewis interrupted Martin’s performance with slapstick. Thankfully Dean got the joke and a template was formed for their otherwise improvised antics.

As described in the New York Times review of Lewis’s book Dean and Me in 2005, “The pair’s live shows were often pandemonium, bubbles of potential chaos in which both they and the audience ‘knew that at any minute absolutely anything could happen.’” 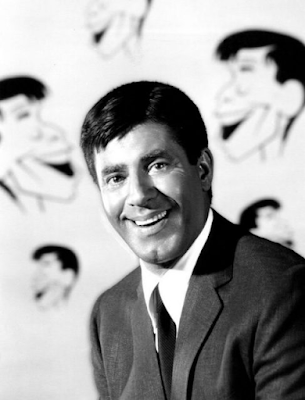 Publicity photo of Jerry Lewis when he was guest-hosting The Tonight Show for Johnny Carson.

On the surface, the act appeared simple. A Guardian article from 2005 writes, “To look at them, they hardly made a natural pair: Dean with his leonine beauty and slow, assured touch with a song or a joke; Jerry gaunt and gangly and hysterical and screeching like a klaxon horn.”

It was a little more complex than that. Both men had a natural intelligence when it came to their showbiz persona. 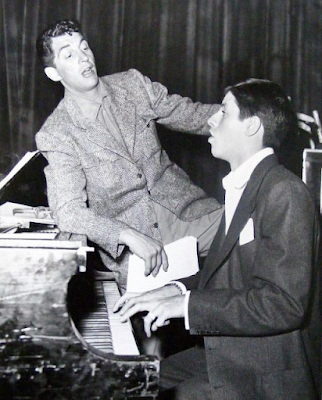 In the days before political correctness Martin faked alcoholism, boosting his laid-back profile. Lewis was in awe of his ability to think on his feet, even when pretending to be legless.

As for Jerry, he harbored ambitions as an artist and fashioned the image of the pair in unexpected ways. The Guardian mentions that “Each stood about 6’1″, but Jerry added lifts to Dean’s shoes and had the soles and heels of his own shaved so that Dean appeared taller.” 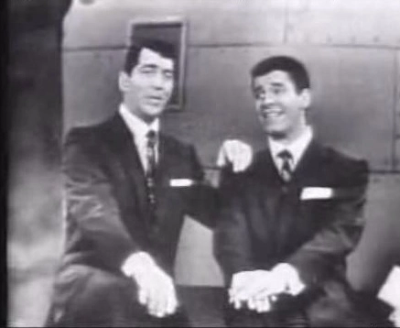 Martin and Lewis in an episode of The Colgate Comedy Hour.

With the younger man wielding control, it was only a matter of time before Dean lost interest. The increasingly explosive double act called it quits after 10 years.

Lewis and Martin’s affection for each other had been soured by the limelight, yet that love was reflected a thousandfold in the country.

The New York Times states “the Martin and Lewis bust-up devastated the team’s multitudinous fans more than the breakup of any Hollywood romance. In the days just before that last show, word got back to Lewis that there was a lot of ‘touchingly hopeful’ gossip around town that the two would patch things up, and afterward, both men faced hostility from a resentful public.” 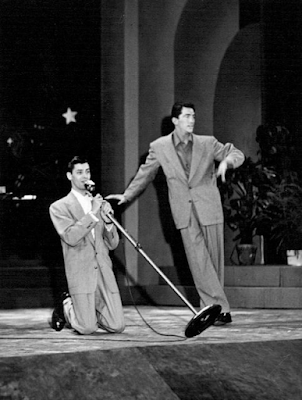 Martin and Lewis on Ed Sullivan’s The Toast of the Town in 1948.

Yet the damage was done and the “brothers” went their separate ways. Lewis developed his career, writing and directing his own movies.

Martin became forever associated with Frank Sinatra and his pals of The Rat Pack, as well as receiving acclaim for his acting and singing. 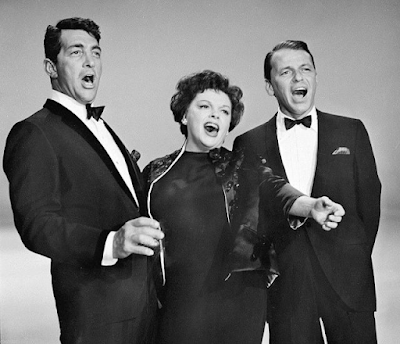 Sinatra with Dean Martin and Judy Garland in 1962.

Sinatra played a key role reuniting the pair in a 1976 telethon for the Muscular Dystrophy Association.

With Lewis performing his usual hosting duties (as he’d been doing for a decade) Frank snuck Dino into the wings. Lewis’s surprise gave way to warmth and the old magic seemed to be recaptured, if only for one night. 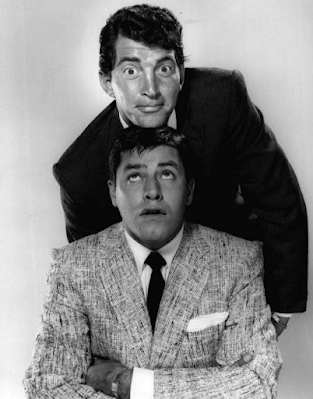 Though Lewis and Martin as a partnership was largely defunct, the personal bond they had couldn’t be denied. It brought them together again in 1987 when Dean suffered an immense tragedy. After his son Dino Jr. died in a plane crash, Jerry reached out. Lewis went on to lose his son Joseph to suicide in 2009, though Dean had sadly passed away in 1995. Jerry died in 2017.

That same year, MEL Magazine wrote about Martin and Lewis, saying “Their partnership, and its aftermath, was everything we’ve come to expect from siblings: contentious, but with a begrudging understanding that the other person knows you better than anyone else.”

In a sense what they had was a love affair, albeit a platonic one. Jerry Lewis and Dean Martin’s relationship kept the world laughing in the post-war period and went on to inspire many with their genuine connection.

Posted by dino martin peters at 10:14 AM

Great breakdown of “Martin & Lewis”, by Steve. Definitely deservin’ of mucho acclaim as one of the leaders when it comes to a comedy/entertainment act. Combinin’ Dino’s singin’ act with Jer’s Manic comedy skit began a routine not yet seen by the public. It exploded & the rest is history!

Hey pallie, likes Danny-o, we always appreciate your incredible insights into everythin' Dino and today we really digs what you sez, "Combinin’ Dino’s singin’ act with Jer’s Manic comedy skit began a routine not yet seen by the public. It exploded & the rest is history!" It's fully fantastico to read you powerful passion both in your weekly Dino-serenade as well as you coolest of cool comments. Keeps lovin' 'n sharin' our one, our only DINO!

Hey pallie, likes thanks Scotty-o for takin' the time to drop in and share your insights. We couldn't 'gree with you more 'bout that remarkable reunion vibrant video with our Dino and Jerry at the MDA telethon. It always always brings the greatest of greatest Dino-happiness to our hearts to watch it and see that the awesome amore that our Dino and Jerry shared shinin' through even after bein' apart for two decades. Best to you, and as always..keepin' lovin' our most most most beloved Dino!