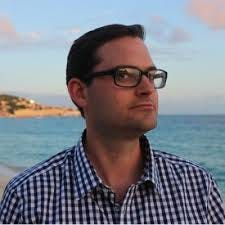 Hey pallies, likes we constantly  continue to be amazed at the many and varied ways that our most beloved Dino continues to make his powerful presence known even these 20 years after his departure from our planet.  Today we take you to the entertainment page of the blog "BUSINESS INSIDER" where Mr. Jason Guerrasio, an entertainment reporter at BI, scribes the post tagged "Burt Reynolds says the reboot of his hit 'Cannonball Run' needs one thing to be successful" reports on Warner Bros havin'
"plans to make a "Cannonball Run" reboot."

Likes as youse pallies will recall, our most beloved Dino's last two feature flicks were the Cannonball
franchise...."Cannonball Run" in 1981 and the "Cannonball Run 2" in 1984....both huge money makers with our Dino playin' his ever cool, hip, and randy self with the help of Mr. Sammy Davis Jr..

Well, Mr. Guerrasio in impartin' the news has coolly chosen to use to promo pixs from the Cannonballs...and likes of course both powerfully potent poses feature our one and only most beloved  Dino....keepin' his fantastic face before John Q Public.  Also included is the original trailer accentin' our Dino, in priestly attire,  wantin' "to bless" Miss Farrah Fawcett.  Likes we will be excited to follow all the details as production starts on the reboot of the Cannonballs.

ilovedinomartin expresses our thanks to Mr. Jason Aguerrasio and all the pallies at "BUSINESS INSIDER" for sharin' this news with us and 'specially for choosin' to awesomely accent our Dino in breakin' the news.  Dino-delightedly, DMP 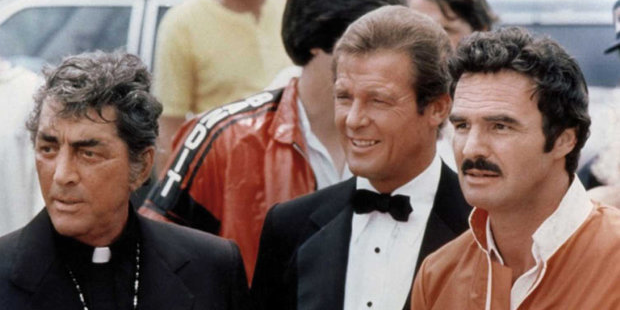 
Warner Bros. has plans to make a "Cannonball Run" reboot, with "Get Hard" director Etan Cohen writing and directing it, as Deadline reports.

The classic 1981 comedy and its sequel starred Burt Reynolds and an all-star cast playing characters who are competing in an illegal cross-country road race. Both films were big box-office hits, directed by "Smokey and the Bandit" director Hal Needham, and they featured the top stars in entertainment of their era: Frank Sinatra, Sammy Davis, Jr., Dean Martin, Roger Moore, Jackie Chan, Dom DeLuise, Shirley MacLaine, and Merilu Henner, to name a few.

As Reynolds told Business Insider on Wednesday, that's just the trick to making the new "Cannonball" a success: casting as many big names as possible. 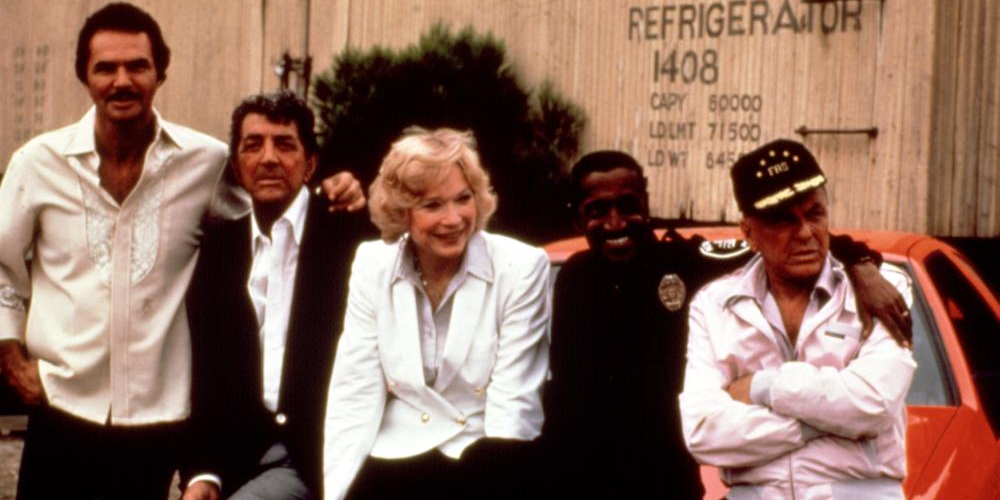 
"You have to be able to get a lot of people nobody thinks you can get," he said. "That's what we really had fun doing, getting those people."

Reynolds, who's currently doing press for "The Bandit," looking back on the making of "Smokey and the Bandit" (it'll air on CMT later this year), said he hasn't been contacted to be in the"Cannonball" reboot. But he understands why Warner Bros. wants to make it.

"It made a lot of money," he said of the original franchise. "But you have to have fun. With Sinatra, we just let him have fun and then you just go with it. And he did have a good time [making the film]."

If the studio takes Reynolds' advice, it will be fun to see what A-list celebrities they're able to collect for the reboot.

Watch the trailer for the original "Cannonball Run" below.


Posted by dino martin peters at 7:23 AM

What a funny and great movie this was, one that i have enjoyed a few times myself. Thank you for bringing this great read our way my friend!

Hey pallie, likes Scotty...yep dude, both of the Cannonballers are full of Dino-viewin' pleasure! Keeps lovin', keeps watchin', keeps sharin' our one, our only Dino!

Burt is AB SO LUTE LY correct 'bout the power of celebrity in these two HILARIOUS flicks! Howevs...their ain't NO WAY possible to match today's Hollywood personalities with those of Dean Martin, et all. Just ain't happenin'! Will be interestin' to see who they pick though.

Hey pallie, likes Danny-o, likes of course, we 'grees with you on this...to our way of thinkin' it's the power of our Dino that really drove the Cannonballs to their huge success.
Keeps lovin' 'n sharin' our most beloved Dino!