Hey pallies, likes we're back one 'gain with a energetic edition of Scotty's Sharin'.  This time 'round our deeply diggin' Dino dude Scotty has shared a well known pose of our most beloved Dino and Miss Shirley MacLaine circa 1958.

What makes our Scotty's sharin' so so swankly special is that he includes potent prose scribed by Miss Shirley 'bout a time she spent movin' moments with our Dino in his den while a dinner party was in progress at the Martin home.  These tremendously touchin' and terrifically  tender thoughts are ones that we have never read before and trust that this may be true for most of youse devoted Dino-holics as well.

Likes what a gigantic gem of Dino-devotion!   The incredibly intriguin' insights that Miss MacLaine offers into our Dino's powerful psyche bring such happiness to our Dino-hearts, to be able to delve deeper and deeper into our main man motivations.

Once 'gain we solemnly salute our pallie of pallies Scotty for yet 'nother coolest of cool contribution to the cause of knowin', lovin', and honorin' our main  man at his beau-ti-ful blog "BlueisKewl."  To checks this out in it's original source, simply clicks on the tag of this here Dino-report.  Dino-delightedly, DMP 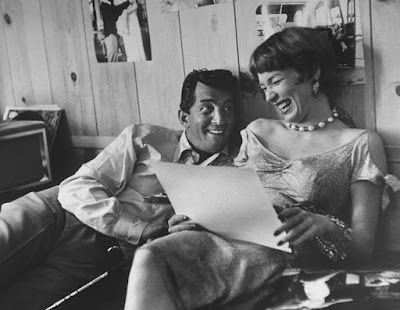 'Once I lost my pearls at one of their dinner parties. I wandered around looking for them and ended up in Dean’s den. He was watching television while his guests were having dinner. He said I could sit down. I did and he told me he felt shy about not being educated and ashamed of his limited vocabulary and his lack of political and social knowledge. “I can’t understand what the hell they’re talking about down there,” he said. “So I don’t want them to know I feel dumb.” He then launched into some new material for his club act, which was so funny I laughed until I felt like I had a hernia! Dean was terrified of the intimacy required to carry on a conversation, so he inevitably segued into comedy routines.' - Shirley MacLaine

One of the most popular and enduring American entertainers of the mid-20th century, Martin was nicknamed the "King of Cool" for his seemingly effortless charisma and self-assurance. He and Jerry Lewis were partners in the immensely popular comedy team "Martin and Lewis". He was a member of the "Rat Pack" and a star in concert stage/nightclubs, recordings, motion pictures, and television. He was the host of the television variety program The Dean Martin Show (1965–1974) and The Dean Martin Celebrity Roast (1974–1985).

In 2012, she received the 40th AFI Life Achievement Award from the American Film Institute, and in 2013 received the Kennedy Center Honors for lifetime contributions to American culture through the performing arts. She is known for her New Age beliefs and interest in spirituality and reincarnation. She has written a series of autobiographical works, many dealing with her spiritual beliefs as well as her Hollywood career.
Posted by dino martin peters at 7:06 AM

Thank you my friend for your continued support on 'ilovedinomartin'. I had no idea until i saw this photograph that Dean and Shirley were very close friends, it goes to show you that you can still learn new things every single day, esp when it comes to Dean! Thank you again DMP for all your continued hard work, it is greatly appreciated!

Dean was such a humble guy...from what I've read. Never gave himself credit for the mega-talent he was. Thanks for sharin' Scotty. Great read!

Hey pallie, likes Scotty-o, indeed, one will never ever learn everythin' there is to know 'bout our Dino, and ain't that the coolest....always new Dino-details to help us grow deeper and deeper in our most beloved Dino! Keeps lovin' 'n sharin' our one and only Dino!

Hey pallie, likes Danny-o, our Dino was the most coolly complex dude ever...and we continue to marvel at his powerful pysche! Keeps growin' in Dino as youse shares him with others!