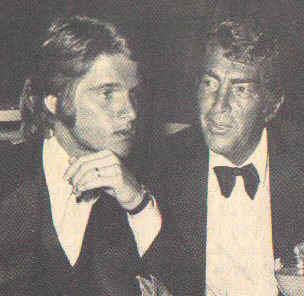 Hey pallies, likes  it was 29 long years 'go on this day,  21 March 1987, our Dino's  most beloved boypallie, Captain Dino Jr., while pilotin' a Guard F-4 Phantom fighter jet for the California Air National Guard, crashed the plane in California's San Bernardino Mountains during a snowstorm. Dino Jr. and his Weapons System Officer, Ramon Ortiz, were both killed in the crash.  Truly it is the saddest and most somber day in the life of our most beloved Dino.

Likes his incredible Daddy-o, Dino Jr. was a renaissance man of extraordinary talents.....singer, actor, tennis pro, pilot. Dino Jr. was destined to become heir apparent to the throne of our King of Cool, but likes that was so so tragicly cut short by the crash of the jet on that darkest of dark days in the life of our Dino.

The demise of Dino Jr. began the demise of our Dino himself. Our great man simply lost the will to live without his prodigy by his side. Truth be told, probably the only man that our Dino looked up to was his beloved namesake Dino Jr.

Below is a picture of Dino Jr.'s gravesite and a bit of information on Dino Jr. and the location of the grave. We thanks the pad Seeing Stars for this picture and information. To checks this out in it's original format, as usual, just click on the tag of these Dino-reflections. Also included below is a brief footage  of the memorial service for Dino Jr.  Dino-sadly, DMP 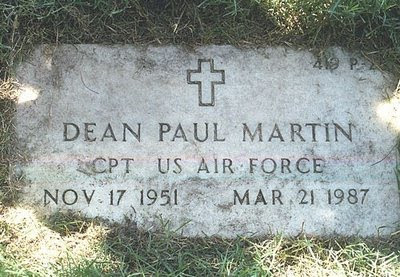 Dino, the son of Dean Martin, part of the 60's pop band "Dino, Desi, and Billy." An Air Force Captain, he was killed when his plane crashed into a mountain; buried at the huge military National Cemetery in Los Angeles, California. His grace is against the south fence bordering Wilshire Blvd, in Section 419, grave P-28.


Posted by dino martin peters at 7:12 AM

A very sad indeed in Dean Martin history. I can only imagine what a terrible thing it must have been for Dean and his entire family to have to deal with. It has to take a very strong person to try and deal with the grief, esp for someone that is in the public eye like Dean was. It is just so sad.

R.I.P. DPM Jr. Brings a bittersweet smile to my face knowin' that Dino is with his boypallie. Together again. Salute, pals!