10 things you may not have known about Dean Martin

Hey pallies, likes thanks once 'gain to the good folks at google Dino-'lerts we goes 'cross the seas for yet 'nother international piece of Dino-remembrance.  Seems that our Dino's youngest boypallie Ricci is takin' his Dino-show to Dartford, England, performin' at Dartford’s Orchard Theatre on April 20.

To help promote Ricci's performance, Miss Jim Palmer, Leisure editor of the "News Shopper" has prepared the prose "10 things you may not have known about Dean Martin as his son prepares to perform in Dartford" to prepare locals for this huge homagin' of our most beloved Dino by Ricci James.

We are guessin' that probably we will be treated to a published interview with Ricci before the show date, but for now we gets to enjoy sharin' 10 Dino-facts. Likes as we peruse the list, we didn't find anythin' new to our Dino-knowledge or probably yours, but we did find at least a trio of little errors in the list and likes we are wonderin' who 'monst  youse pallies will locate 'em and note them through a bit of patter to us here at ilovedinomartin?

While we found nothin' noteworthy from this post, as well as a few minor errors, we are still powerfully pleased to share it with youse and we sez our thanks to Mr. Jim Palmer and all the pallies at the "News Shopper" for keepin' the Dino-light glowin' ever Dino-bright through their promotional efforts of  Ricci's comin' Dino-show in the fine city of Dartford.  To checks this out in it's original source, simply clicks on the tag of this here Dino-epistle.  Dino-always, ever, and only, DMP 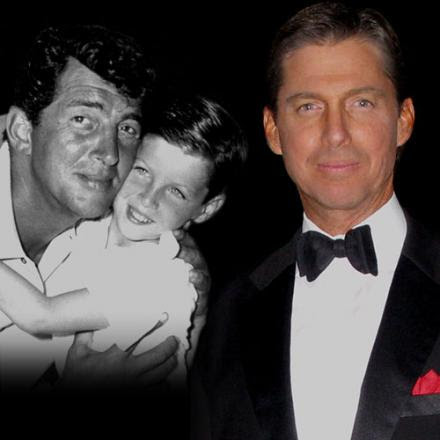 Dean Martin's son Ricci will perform his hits in Dartford

In a career spanning six decades, Rat Pack singer Dean Martin performed to millions of fans worldwide and was a star of the cinema, television, radio and stage.

He died on Christmas Day in 1995 but since 2003, his youngest son Ricci has been travelling the globe keeping his father’s legacy alive under the name Dean Martin Jnr.

Ahead of his performance at Dartford’s Orchard Theatre on April 20, here’s 10 things you may not know about Dean Martin…

Dean Martin was born Dino Paul Crocetti in Ohio in 1917. His father Gaetano was an Italian barber.
Martin spoke only Italian until he started school aged five.

As a teenager, he fancied himself as an amateur boxer and had the name Kid Crochet.

Dean Martin and Jerry Lewis first performed together in Atlantic City in 1946 and it was such a disaster they nearly got sacked after the first show. They went on to make 17 films together over the following decade.

Martin has his own TV show – The Dean Martin Show – that ran for 264 episodes from 1965 to 1974. He famously only worked one day a week on the show and the cast had to rehearse with a stand-in.

He made more than 100 albums and recorded more than 600 songs.

He was married three times and had eight children, including Ricci, who was born in 1953 to second wife Jeanne Biegger.

According to Imdb, Martin appeared as an actor in 67 movies including Robin and the 7 Hoods and Ocean’s 11.

Frank Sinatra, Dean Martin, Sammy Davis Jnr, Joey Bishop and Peter Lawford never referred to themselves at ‘The Rat Pack’. The preferred ‘The Clan’ or ‘The Summit’.
Posted by dino martin peters at 7:08 AM

What a wonderful read and it is truly amazing the huge amount of work that Dean let, so many albums, songs and movies. We really are so lucky to be able to still view all of this so many years later. Another great read my friend.

Have a safe and happy weekend.

Hey pallie, likes faithful as ever Scotty....thanks for once 'gain droppin' by and sharin' in the wonderment of our main man Dino! Keeps lovin' 'n sharin' our one, our only Dino!

Ricci Martin looks a lot more like his King of Cook dad than Dino, Jr., did.

Ricci sounds a bit like our Dino, but, sadly, lacks the magic. That said, I admire Ricci for continuing to pay tribute to his father.

Hey pallie, likes Miss AOW, I thinks you means the King of Cool. Keeps lovin' our most beloved Dino!

Hahaha! Yes. That's what I meant.

Hey pallie. likes Miss AOW...cool...but I do think that our Dino was the King of Cook as well with his bourbon burgers! Keeps lovin' our most beloved Dino!