highball and cigarette reliably in hand, there was tan-tan Dino

Hey pallies, the homagin' of our Dino continues all over the web on the ninty-fourth anniversary of our Dino's birth. Below from the blog pad "HiLoBrow" comes some Dino-remembrancin' from the pen of none other then a Professor of Philosophy...Prof Mark Kingwell to be exact, who holds forth at the University of Toronto.

Professor Kingwell places most of his Dino-thoughts on our Dino's quartet of Helmer capers and the amazin' influence they had on a variety of other flicks. As you will read, it appears that this highly educated teacher simply doesn't "get Martin." While acknowledgin' our Dino's amazin' influence, this scholar of philosophy simply is unable to dig the Dino-philosophy of cool.

None-the-less Professor Kingwell does give our Dino a nod on the anniversary of his appearance on the earth, and for that ilovedinomartin sez thanks. Always cool to see the life, times, and teachin' of our Dino lifted up in so many and varied ways. And, likes we know that our Dino uses each and every one to bring more and more palleis to Dino-knowledge, Dino-love, and deep deep Dino-devotion.

Thanks to the pallies at "HiLoBrow" and Professour Mark Kingwell for puttin the accent on our Dino on his great day. To view this in it's original format, likes just clicks on the tag of this here Dino-message. Dino-awed, DMP


Mark Kingwell is a professor of philosophy at the University of Toronto. 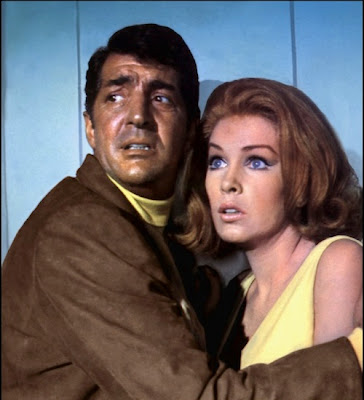 Somebody should have told DEAN MARTIN (Dino Paul Crocetti, 1917-95) that his canary-yellow turtleneck in the Matt Helm movies didn’t flatter a face tanned like saddle leather. Martin was already an established Hollywood and Vegas property when he made The Silencers (1966), first of four campy perversions of Donald Hamilton’s tough, witty spy novels, and subsequent influence on everything from Mel Brooks’s “Get Smart” series to Mike Myers’s Austin Powers franchise. The opening sequence has Helm sliding from a tilting circular bed into a vast bubble bath with his ‘secretary’ Lovey Kravezit then emerging to be buffed with power towels and fitted with silk kimonos dropped from above — the bachelor-pad equivalent of overcomplicated battle-prep assembly lines in Gerry Anderson’s Thunderbirds Are GO (also 1966) or Nick Park’s The Wrong Trousers (1993). The Helm movies are tedious babe-parades loosely draped over supervillian-in-underground-lair-bent-on-global-domination plots, but they mark an important shift in Dino’s long and unstoppable career: from cherished if slightly goofy crooner-comedian of the Martin-Lewis and Rat Pack heydays, to dinner-jacketed hunk of boiled meat. Hosting the Dean Martin celebrity roasts of the 1970s, laboured televisusal festspielen that skewered a gallery of hilo notables ranging from Barry Goldwater and Ralph Nader to Truman Capote and Evel Knievel, Martin reached his nadir. Always in the middle seat, making with the conspicuous guffaw, highball and cigarette reliably in hand, there was tan-tan Dino, cocoa-butter shell of a man. Kick in the head is right.

On his or her birthday, HiLobrow irregularly pays tribute to one of our high-, low-, no-, or hilobrow heroes. Also born this date: Prince and Michael Cera.
Posted by dino martin peters at 7:07 AM

Hosting the Dean Martin celebrity roasts of the 1970s, laboured televisusal festspielen that skewered a gallery of hilo notables ranging from Barry Goldwater and Ralph Nader to Truman Capote and Evel Knievel, Martin reached his nadir.

Pfffft. Those roasts were much in demand! Look at all the headliners who wanted to be on the show. In this list we can include Orson Welles and Ronald Reagan -- hardly people who frequented a poor event.

Maybe the professor is irked that he can't begin to make the money that our Dino did. Sour grapes, I think!

Hey pallie, I'm with you Miss AOW...and I left him my Dino-differences at his blog post. Keeps lovin' our Dino!