Hey pallies, the Dino-homagin' simply continues in cooler and cooler Dino-ways all over the 'net! From the blog pad "Alt Film Guide," from the pen of Andre Soares, comes the wonderful Dino-news that TCM is havin' a likes totally totally awesome Dino-fest of Dino-flicks this Dino-day of our Dino's birth.

Six-count-'em-six of our Dino's big screen efforts are bein' shown today...rangin' from the sex farce "Marriage On The Rocks" to Dino-classics likes "Oceans 11" and "Some Came Running." Also on the Dino-playlist are our Dino's only big screen musical, "Bells Are Ringing," the swingin' western, "Four For Texas" and that other Rat Pack romp, "Robin And The Seven Hoods."

So gets you small screens on pallies and gets youself some huge doses of our Dino on this day of his entry onto our planet. To view this post in it's original format, just clicks on the tag of these Dino-thoughts.

ilovedinomartin sez our thanks to the pallies at The Alt Film Guide, 'specially Andre Soares for puttin' us on to the Dino-celebration goin' on over at TCM...sure to helps draw more and more pallies into likes total total Dino-addiction! Dino-awed, DMP 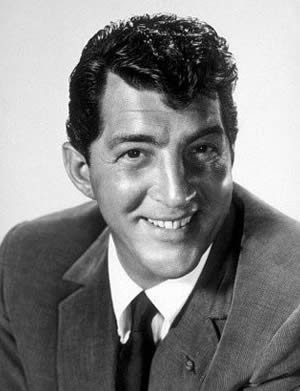 Dean Martin would have turned 94 on Tuesday, June 7. Generally a somnolent presence in low-brow comedies co-starring either Jerry Lewis or Frank Sinatra, Martin was at his most interesting in dramas, e.g., Vincente Minnelli's Some Came Running, Howard Hawks' Rio Bravo.

Both the somnolent Dean Martin and the interesting Dean Martin can be seen Tuesday morning and afternoon on Turner Classic Movies. In addition to Some Came Running, co-starring Sinatra, and the Oscar-nominated trio of Shirley MacLaine, Arthur Kennedy, and Martha Hyer, TCM will be showing Marriage on the Rocks, Bells Are Ringing, Ocean's Eleven, 4 for Texas, and Robin and the Seven Hoods.

The last three films are for Rat Pack fans only, though 4 for Texas offers two unforgettable pairs of knockers that, quite literally, make Martin — and Frank Sinatra at his most unbearable — all but invisible. And for that the world must praise the gods for Anita Ekberg and Ursula Andress.

Robin and the Seven Hoods is worth a passing glance because Edward G. Robinson has a cameo. Additionally, leading lady Barbara Rush, even if wasted, is always worth a look.

Marriage on the Rocks is an atrocity, but since Deborah Kerr is in it, it's also a must. Kerr doesn't manage to save the film — not even Zeus in all his glory could have. But she does prove herself a quite capable comedienne, far out-comic timing both Sinatra and Martin.

Adapted from the Broadway musical comedy by Adolph Green and Betty Comden, Bells Are Ringing is a disappointingly overdone Vincente Minnelli effort. Judy Holliday, however, has several good moments — don't miss her "Mary and Ethel" bit. Bells Are Ringing is also notable as Holliday's last film. She would die of cancer five years later, at age 43; come to think of it, Holliday died exactly 48 years ago (June 7, 1965).

I stop by only to say: Happy birthday, Dino!!

Hey pallie, thanks ever so much Kinezoe for wishin' our Dino a cool birthday wish...keeps lovin' our Dino!

My DVR was smokin' yesterday pal! Got em' all! What a day!

Hey pallie, likes Danny G. was likes thinkin' of you when I did this postin'...was wonderin' if you were able to capture all these Dino-moments for future Dino-viewin'...very cool indeed...and keeps lovin' our Dino!