Dean Martin parade is back

Hey pallies, likes Dino-fest 2011 is comin' up this weekend in Dino-mecca....Stubenville, Ohio. From the blog pad "Media Man International" comes word that the Dean Martin Parade will return as part of the weekend festivities.

While this might appear to be good news, I simply have to ponder whether that be the case or not, when the pallies who run the Dino-fest have chosen "The 'Living Legend' of professional wrestling"...."Bruno Sammartino of Pittsburgh" as the marshall of the parade. Now, no disrespect to Mr. Sammartino, but what the you know what does this wrestler have to do with our beloved Dino? Seems to me that in the past, those chosen as parade marshalls have had some connection to our great man...his life, his time, his legacy. Seems that Sammartino, accordin' to the article below, was chosen because of his popularity....since when is our Dino not a great 'nough draw for the event held in his honor?

On 'nother note, likes a local Stu-ville television station has reported that our Dino's girlpallie Deana has had her Thursday night concert at the Capitol Theater in Wheeling, West Virginia cancelled due to extremely poor ticket sales. Accordin' to Miss Rose Angelica, Dino-fest chairwoman, less then 50-count-'em-50 tickets had been sold by Monday afternoon for Miss Martin's performance.

Makes one wonder what the future of Dino-fest is when they have to pick a long-retired wrestler to try and draw a crowd to the Dino-parade..which also the article below notes includes the "Off Key Kazoo Band." And certainly the poor poor ticket sales for Deana Martin says somethin' 'bout her long tenure with bein' front and center at Dino-fest.

Will be interestin' to read more 'bout this year's event and how it fares...but right now pallies, thin's don't appear to be lookin' all that fine on this Dino-front.

ilovedinomartin thanks the pallies at "Media Man International" for sharin' news of the Dino-parade. To view this in it's original format, likes just clicks on the tag of this Dino-gram. Dino-wonderin', DMP 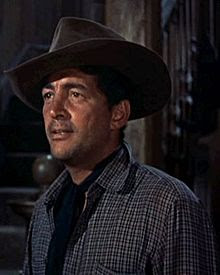 STEUBENVILLE - The "Living Legend" of professional wrestling will be the grand marshal of the revived Dean Martin Parade scheduled for June 18.

Bruno Sammartino of Pittsburgh will highlight a parade that stopped two years ago because of a lack of funds.

Now Beth Wood, executive director of the Steubenville Convention and Visitors Bureau, is looking for people, organizations and businesses to join the parade that will start at noon in front of Steubenville High School.

"The cost for a parade entry is only $10 and that is to cover expenses. Anyone interested in being a part of the Dean Martin parade can pick up an application at my office in the Historic Fort Steuben Visitors Center or can go online at www.visitsteubenville.com," explained Wood.

"In addition to Bruno Sammartino, the Dean Martin festival organizers have lined up six vehicles with different celebrities, including Deana Martin and her husband and also the Off Key Kazoo Band," said Wood.

"At this point we have approximately 25 entries in the parade including the Big Red marching band. And we are now looking for more people interested in participating in the parade and joining Bruno Sammartino in the parade on Fourth Street," added Wood.

"We are expecting a large crowd for the parade because Bruno Sammartino remains a very popular athlete even years after he retired from professional wrestling," noted Wood.

The Dean Martin festival, slated June 17-10, is part of the annual Traditions Festival in Steubenville.
Posted by dino martin peters at 7:15 AM

A few years ago, when Mr. AOW and I were in Steubenville for our anniversary celebration at the Dean Martin Festival, we saw one of these parades. But a Dino impersonator led that parade -- Tom Stevens, I think. Fitting!

Go to Tom Stevens's site and click on the star with Dino's name on it.

Also check out these Tom Stevens videos at YouTube.

Hey pallie, thanks Miss AOW for the links to Mr. Stevens....always thrill to know just how many many pallies are doin' Dino-emulation...immitation is the sincerest form of flattery they sez...and there are likes just so so many pallies who whats to be our beloved Dino! Keeps lovin' our Dino!

Times are hard economically as it is and Steubenville ain't exactly one of the USA's most sought after entertainment meccas. Add to that the simultaneous release of the Time-Life TV show DVD's, the "Cool Now, Cool Then" CD and book extravaganza and the now-double CD "Essential Dean Martin" collection and you've got some Dino-holics that are tapped out of any disposable funds to make that pilgimage!

Hey pallie, I hear you pallie Matty....I'm still waitin' for my copies of the 6 DVD Dino-discs to arrive, as well as the "Cool Then, Cool Now" collection...just wonderin' if you have gotten either or both of these new 'citin' Dino-treasures yet? Keeps lovin' our Dino!