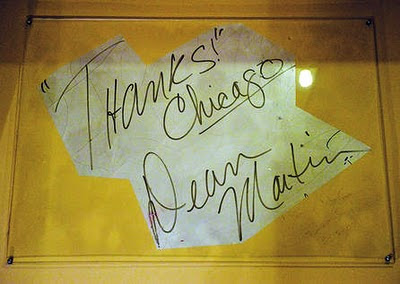 Hey pallies, likes today's Dino-post gives all us Dino-holics a new place to makes a Dino-pilgrimage. From the on-line presence of Chicago's Sun-Times newspaper comes word of some cool Dino-autographs backstage at a historic windy city theatre!

Mr. Dave Hoekstra of the Sun-Times reports that 'mong the more then 10,000 signed autographs featured on the backstage walls of the "landmark" Chicago Theatre are at least a couple from our beloved Dino. The most famous one bein' of our Dino, the Sam, and the frankie when they played the theatre in 1988 as part of the Rat Pack Reunion Tour....which as all you pallies will remember our Dino left after playin' at this venue in Chicago.

The other Dino-signature that heads this Dino-gram "Thanks!" Chicago....Dean Martin, is much clearer then the one mentioned above, but likes have no info on when our great man did his great wall-graph!

I likes can't wait to make my way to Chicagoland to gets to view these Dino-treasures! Thanks to Mr. David Hoekstra and the Chicago Sun-Times for puttin' us on to these amazin' Dinofinds. To view this entire article in it's original format, please clicks on the tag of this Dino-post. Dino-loved, DMP 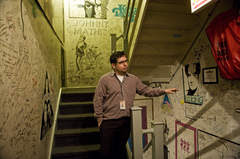 The Chicago Theatre’s Javier Ayala points out various autographs that cover the walls, stairwells and doors backstage. Tour groups sometimes get to see the signatures up close. | Rich Hein~Sun-Times


Some of the signature characteristics of the Chicago Theatre are rarely seen by the public.

The backstage area of the landmark theater —which celebrates its 90th anniversary on Oct. 26 — features more than 10,000 autographs and murals from headliners and their sidemen and crew members. The autographs cover three floors on both sides of the stage.

“As many times as we can, we take them backstage to look at a limited amount of autographs,” Ayala said as he stood by a security door panel that was autographed by Sinatra, Dean Martin and Sammy Davis Jr. on what turned out to be the final stop of the 1988 Rat Pack reunion tour. Martin went home after the Chicago stop and was replaced by Liza Minnelli (her father Vincent got his start designing costumes at the Chicago Theatre). 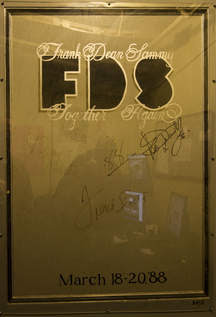