Hey pallies, just likes when you thinks that thin's couldn't gets better for all us sold old Dino-holics, even greater Dino-news gets released. From the pallies at Billboard comes totally totally stunnin' Dino-news from Mr. Phil Gallo of L.A.

How fab to see the Renaissance of our Dino comin' on huge with the release of the Dino-show DVDs on May 24 and then on our Dino's birthday, June 7 the release of the double CD "Cool Then, Cool Now" with the coffee table picture book of our amazin' Dino. And, then also to know that on that same date Capitol/EMI will be spreadin' more Dino-cheer with "Classic Dino: The Best of Dean Martin," a reworkin' of "Dino: The Essential Dean Martin."

Dino-mania is gonna breaks out pallies and likes what coulda be cooler then that...with more and more pallies of all ages and stages, comin' to know, love, and honor our King of Cool.

And to read that a Dino-box-set is in the works for late this Dino-year...likes, likes totally totally Dino-inspirin' pallies! And, then also to read that our Dino's girlpallie Gail is speakin' of more and more Dino-projects...will be waitin' with bated breath to learn more and more details of the Dino-revolution ahead!

Thanks to the pallies at Billboard for lettin' the world know 'bout this Dino-renaissance and to Mr. Phil Gallo for puttin' the words on page! To read this in it's original format, likes just clicks on the tagg of this Dino-report. Dino-loved, DMP 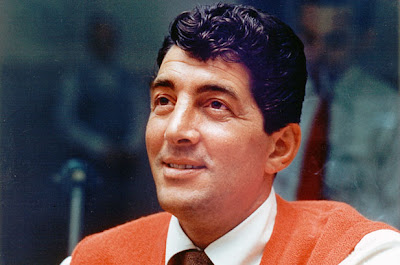 Hoping to extend the renaissance of Dean Martin that has occurred over the last five years, a collection of DVDs, CDs and a coffee table book will be released in late May and June, while a boxed set is in the works with an eye for a release late this year.

Universal Music Enterprises will release a hardcover book and musical collection titled "Cool Then, Cool Now" on June 7. Photos in the 60-plus page book were acquired from personal collections and family archives, featuring shots of Martin on movie sets and at home; the two-CD, 28-song collection spans Martin's musical career.

Also on June 7, Capitol/EMI will release the 14-track "Classic Dino: The Best of Dean Martin," an expanded version of the 2004 release "Dino: The Essential Dean Martin," which has sold 1.3 million copies, according to Nielsen SoundScan. The new version has six added tracks.

Meanwhile, NBCUniversal Television Consumer Products and Time-Life will release "The Best of the Dean Martin Variety Show," the first time Martin's popular show has been released on DVD, on May 24. The release will be available as a single DVD, double DVD set and six-DVD Collector's Edition.

"We want to see more projects and we're trying to figure that out now," says Gail Martin-Downey, one of nine Martin heirs handling Dino projects. "When our children and grandchildren see dad (Martin) pop up on YouTube, we know there's a growing audience out there."

For the first time in the 15 years since Martin's death, the Martin family is in talks to hire an agent to act as a clearing house for marketing and licensing of his likeness and works that the family controls. Martin's centennial will be in 2017.

EMI has worked the Martin catalog consistently over the last several years, releasing "Amore" through Starbucks in 2006 and elsewhere in 2009 and creating an album of duets, "Forever Cool," to commemorate his 90th birthday in 2007. "Amore has sold 145,000 copies while the duets disc moved 104,000 copies.

"The TV shows captured [Dean Martin] in his casual comfortable way," Martin-Downey tells Billboard.com. "Most of the shows capture that, plus you get his serious side and the silly sketches. It really shows who he was at home."
Posted by dino martin peters at 7:22 AM

Hooray! Only 6 more years to go!

Wow !
Am I dreaming or is this really true ?
Things are really starting to happen :)
This could be the start of bigger and bigger things to come.
And nothing could be bigger than the release of the complete uncut episodes of The Dean Martin Shows.

Hey pallie, Miss Ky, no more need to dream..'cept we all wanna be dreamin' of our Dino...the Dino-revolution is goin' to be in full swing soon..and no one and no thin' is ever gonna stop Dino-mania from breakin' out all over the world! Thanks for some Dino-patter and by all means, keeps lovin' our Dino!