Hey pallies, back again Dino-holics to share 'nother stellar Dino-discovery from the world wide web. Today ilovedinomartin turns it's attention to a Brit dude tagged Simon Edwards (Based in Warwickshire and Coventry) and his swingin' web pad "no81bob's world."

Seems that Mr. Edwards features a different musical artiste each week at his blog statin'.........

"Living with… is rediscovering that old habit of getting an album and just listening to that all week. Its how music fits with our lives. How its sometimes just a backdrop, sometimes at the foreground. Living with… is about people and music, those that help you discover music and those that are part of the story."

Well this week Simon has chosen to put the accent on our beloved Dino in his coolly creative Dino-prose "Learning Italian with…Dean Martin…for a week." Mr. Edwards features such Italiano Dino-words as menefreghista, amore, and pasta fazool or pasta fagioli.

Pallies, likes here is my fav of fav quotations from Simon's Dino-reflections...

....In a world where we over-analyse our work, our politics, our lives and relationships and the lives and friendships of others 24×7 on news channels, gossip magazines, on twitter…I found it refreshing to live life through a menefreghista where its not at all that complicated…”My life’s gonna be beautiful. I’ve sun- shine enough to spread; It’s like the fella said, ‘Tell me quick. Ain’t love like a kick in the head?’” “Let us leave the confusion and all disillusion behind. Just like bird of a feather, a rainbow together we’ll find”

Likes truly truly how refreshin' as Edwards sez 'bout his week of Dino-learnin' and Dino-livin'......"I found it refreshing to live life through a menefreghista where its not at all that complicated." This Edward guy likes makes a great point of just why we need our Dino more then ever!

ilovedinomartin sez our thanks to Brit Simon Edwards for sharin' such a stunnin' trib to our Dino...and certainly helpin' his blog readers to know, love, and honor our great man in a greater way. It likes continues to warm the depths of my Dino-heart to find such pallies as Edwards speakin' so candidly and insightfully of the life and teachin's of our beloved Dino. Likes to read this in it's original format, likes just clicks on the tag of this Dino-message. Dino-loved, DMP 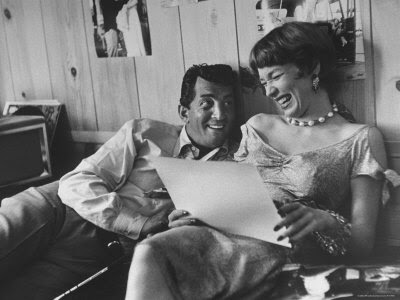 [I'm sure somewhere I need to find copyright for this glorious photo, so may have to remove it...but for the time being enjoy the captured moment...see Shirley Maclaine quote below]
Continuing the Italian theme of last week (Madonna), I’ve spent the week learning some of the lingo with that master of smooth, Dean Martin…so this is how it went…

menefreghista – a person who couldn’t care less derived from the expression me ne frego (I couldn’t care less) with an ista added on to the end ‘cos its Italian. A word that is essentially Dean Martin as he always remained slightly detached, a distant figure that no one really understood. He never seemed to show that he cared that much.

Shirley Maclaine described the difficulties of understanding him “Getting to know Dean was another story … The words that come to mind are those that describe a person cut off from feeling – purposefully cut off. Perhaps that was why he seemed so devil-may-care and so coolly casual. The Italians, I later learned, had a more apt word for it, menefreghista, which means ‘one who does not give a f***.’ Dean Martin was basically a menefreghista.”

In a world where we over-analyse our work, our politics, our lives and relationships and the lives and friendships of others 24×7 on news channels, gossip magazines, on twitter…I found it refreshing to live life through a menefreghista where its not at all that complicated…”My life’s gonna be beautiful. I’ve sun- shine enough to spread; It’s like the fella said, ‘Tell me quick. Ain’t love like a kick in the head?’” “Let us leave the confusion and all disillusion behind. Just like bird of a feather, a rainbow together we’ll find”

Maybe, it was all simpler then but I suspect that the world is divided…in to the menefs and the non-menefs and being half Swiss I could never be the former, well not without a lot of consideration, angst and a referendum…

amore – as in Love or Zamora.

Love as in Amo, amas, amat, amamus, amatis, amant. Was I one of the last generation to learn Latin at school? (And drop it like a bag of spanners as soon as I could) The smell of blackboards and chewing gum stuck under desklids is flooding back as I write this…

Amore is probably the best word to describe the relationship Brighton fans and Bobby Zamora had and still have. In the three years that he played for the Seagulls he scored 83 goals and we had two successive league championships – the first silverware since 1964! The relationship also brought Brighton’s cultural contribution to the football chanting scene of the 00s in of course the immortal adaptation of Dean Martin’s That’s Amore. 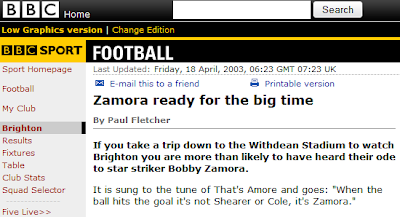 I love the fact that the BBC sports article from 2003 politely picks up on the 2nd verse (football chants can have verses for the uninitiated). However, the more commonly sung opening verse went along the lines of “When the ball hits the net like a f*****g rocket that’s Zamora” More widely used, if clearly less widely reported upon. Bobby returned from a long-term injury to play and score for Fulham last week – good to have him back. That’s Amore.

pasta fazool or pasta fagioli, meaning “pasta and beans”. From last week you’ll recall P and I embarked on an Italian cooking fest for a school project. No pasta fazool for us – though on the Saturday home made spaghetti with home made pesto (pasta pesto if you prefer). This went stunningly well although having made the pasta dough ourselves we now understand why mama has such big forearm muscles. Much pummeling and cajoling required. And all washed down very nicely with an authentic Pinot Grigio and freshly grated parmesan.

However, Sunday was an excursion in to the world of Italian dessert with a recipe for Tiramisu.

“Easy” we thought bringing that combination of youth (P and a friend) and inexperience (me). As the photo below shows, I believe we have brought a new dessert to the table which we would call rospo nel foro dolce (literally translated means sweet toad in the hole). Taste was all there, but as Greg from Master Chef would say a little lacking in presentation.

As to the musical backdrop for the week, as with other artists from earlier times I struggled to find the right Dean Martin album from the period so resorted to a couple of compilations (the main being 2010′s All Time Greats). The usuals come through with some added gems that are worth looking out – a twee duet Two Sleepy People with Line Renaud, How d’ya like your eggs in the morning? with Helen O’Connell and the rather bawdy Luna Mezzo Mare - fun but not really a classic I suppose.

Much as I loved the trip to menefrighista land by the middle of the week it began to lay a little heavy (rather like the homemade Tiramisu/ sweet toad in the hole) so a blast of Faith No More was called for. They do say the secret of Italian cooking is in the contrast of flavours.

Video of the week captures it all, the music, the food, the wine….That’s Amore!

Glee Watch: Three song highlights this week. Firstly, true bad taste Glee with the geriatric rendition of The Living Years, the song has never sounded more apt. Secondly, back to high energy Glee with a barnstorming rendition of Valerie including great dance routine that deserves the standing ovation…this is what we pay to watch! Thirdly, and probably the highlight a performance of the ungleeable Florence and the Machine’s Dog Days Are Over…they proved me wrong with a riproaring rendition. So, despite a slow start, turned out to be a great Glee Watch. Oh, and we love Emma’s outfit as she stands up Will by the school bus!
Posted by dino martin peters at 3:33 PM

Thanks for cool review…I’m feeling the love. Dino chilled my week in his own inimitable way. Love the Dino Martin blog…
no81bob
http://no81bob.wordpress.com/

Hey pallie, Simon dude likes loves to put the accent on others who are spreadin' the Dino-love..keeps chillin' on our Dino and, likes of course, keeps lovin' our beloved man!