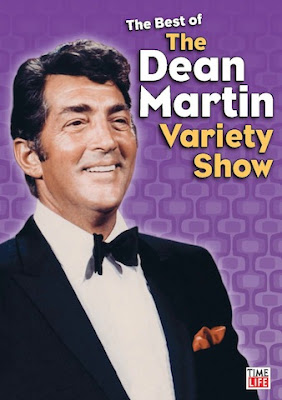 Hey pallies, astoundin' Dino-news keeps on pourin' in from the world wide Dino-web. Opened my email and found this outstandin' announcement from the pallies at CO5MEDIA that answers many of our Dino-quires 'bout the May 24th Time-Life release of vids from our Dino's amazin' variety show.

The information below does a stellar job of 'xplainin' what will be contained on the one, two, and six disc Dino-releases. Cool to learn that each disc will be over two hours each!

Takes the time to read all the glorious Dino-details below...and how cool to finally see what the cover will look like for these Dino-collections!

Thanks to the pallies at CO5MEDIA for sendin' this my Dino-way so likes that I coulda share it with all the Dino-holics here at ilovedinomartin. Can't wait for May 24th to come in Dino-time! Dino-awed, DMP

FROM THE GROUNDBREAKING TELEVISION VARIETY SHOW

GUESTS AND MUSICAL PERFORMERS APPEARING INCLUDE

THE ANDREWS SISTERS, WOODY ALLEN AND MANY MORE

COLLECTIONS ARE THE FIRST OFFICIAL RELEASE OF ACCLAIMED SHOW

The Dean Martin Show ran for nine seasons, airing on NBC from 1965 to 1974. Hosted by legendary entertainer Dean Martin, the unique variety and comedy show was a television pioneer. There were no rehearsals, no re-takes, and Martin simply just wasn't a host behind a desk and a microphone - he took part in virtually all the segments. Whether talking and singing with guests or performing a comedy sketch, Martin put every guest at ease and was able to coax even the most serious actors (such as Orson Welles and Jimmy Stewart) to indulge in their comedic and musical sides. Guests had a great time, word got out, and after the initial success of the show EVERYONE wanted in on the act.

A famed star of the silver screen, television icon, Grammy® Award-winning singing sensation and member of the renowned "Rat Pack," Dean Martin's show business legacy is legendary. His musical career features such classics as "Ain't That A Kick In The Head," "That's Amore," "Mambo Italiano," "Everybody Loves Somebody," "Sway," "Volare," and more, releasing dozens of album recordings over his lifetime. Starring in dozens of well-known movies including Ocean's Eleven, Rio Bravo, The Caddy, and Who Was That Lady?, for which Martin received a Golden Globe nomination for Best Actor, coupled with a highly popular television career, Dean Martin certainly earned his nickname as the "King of Cool."

Guests had a great time, word got out, and after the initial success of the show EVERYONE wanted in on the act.

Our Dino was the consummate host. He accepted all guests for who they were.

Hey pallie, indeed Miss AOW...our Dino is the host with the most...who woulda wants to hang out with our Dino...keeps lovin' our Dino!