Hey pallies, in part two of our interview with Dino-holic Danny G. our pallie puts the accent on his swingin' mantown pad and on raisin' his wee boypallie Nicky and girlpallie Stella in the Dino-way. Cool stuff indeed dudes. Thanks 'gain to our Danny G. for takin' the time and puttin' in the energy to share his amazin' passion for our beloved Dino! Dino-loved, DMP 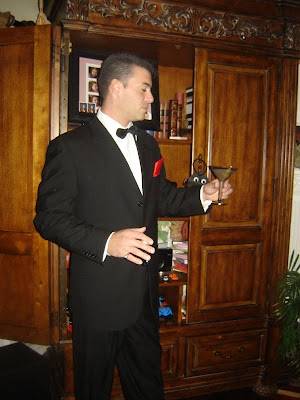 DMP: Danny-o man, perhaps this woulda be a cool time to share some Dino-details with our readers 'bout your "Man-town". aka "Dan-town".

DG: Well, I guess it's like every other mantown out there...bar, dartboard, big screen T.V., life size cut-out of DEAN MARTIN!!! What?! Dosen't every self respectin' Dino-holic have one of those??!!! Other than that, just a few other signs of Dino-devotion: Some framed classic pics, a couple old movie posters & mags. The kids enjoy it as much as I do. We have friends over sometimes and the wee ones can't wait to get down there and get some Dino tunes-a-playin'!

DMP: Pallie, you man-town sounds so so Dino-heavenly! Likes now I know that yous aren't goin' be committin' to havin' fav Dino-croonin's...and I likes totally totally understands..but when you sez, " the wee ones can't wait to get down there and get some Dino tunes-a-playin'!," does makes me wonder if your girl and boy pallies, Stella and Nick, have fav Dino-tunes that they most loves to be partakin' of?

DG: Funny you should ask pal. Stella has three favorite favs! She absolutely loves "Baby-O," "Mambo Italiano" & "Things" with Nancy Sinatra. She's even got some of the words down pat. She loves when the two of us attempt a duo on Things. Pretty funny! Nick just loves em' all!!! 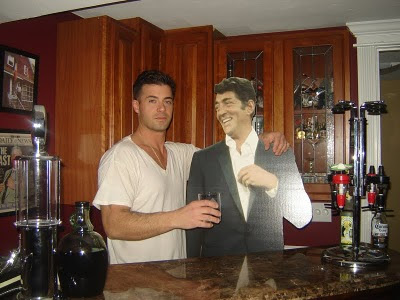 DG: Man pal, this kid really knows how to make his Pop proud and crack me up at the same time! When Nicky G. is in the right mood and he hears a choice Dino tune, he throws his arms out in classic Martin style and attempts to mouth the words. This, comin' from a four year old is some seriously funny stuff! That's my boy!!! 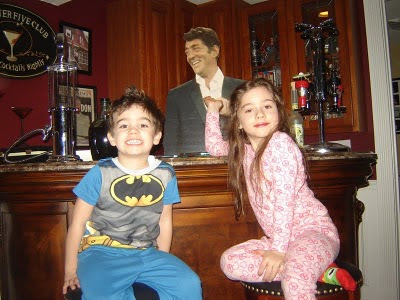 DMP: Dude, does sounds likes you are doin' an amazin' job of directin' your youngens in the Dino-way....been wonderin' have you started Stella and Nick on partakin' of our Dino on the " big screen T.V......perhaps viewin' some Dino and the kid flicks as you did with your daddy-o?

DG: They actually haved viewed alot of Dean's flicks. Usually not the whole flick, but some here, some there. Nick is still a little too young to have much interest but my Dino-squirt Stella is really catchin' on fast! That's my girl!

DMP: Cool, which likes, of course, is leadin' me to Dino-wonderin' which of the Dino-films are of most interest to your girlpallie Stella?

DG: Anythin' Dino is interestin' to my lil' Dino squirt. We've watched 5 Card Stud together. She seemed to enjoy that. Lots of questions though. "Why did Dino do that?" "Why did Dino say this?" She's at that age I guess. The only Martin & Lewis flick she's seen is Scared Stiff. Of course she wanted to know, "Why was Dino bein' mean to Jerry Lewis?" I explained it was just to be funny in the movie and all was well again in Dino-land! 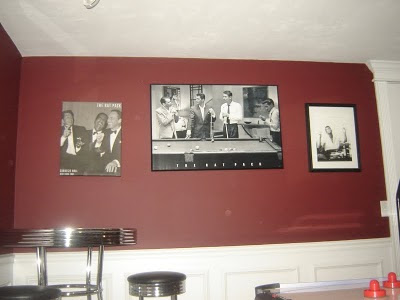 DMP: Ain' that the sweetest...grand to see you little girlpallie so so Dino-pysched...so likes pallie what woulda you say was Miss Stella's most profound Dino-quire?

DG: I gotta admit, I get a real Kick in the Head when Stella asks me..."Did you know Dean Martin?" As I explain that I didn't and that sadly he's no longer with us, she stops in wonderment for a couple seconds and then says..." Now YOUR the REAL Dino!" Pretty funny.

DMP: Man-o-man likes am I ever so glad to have asked you 'bout that...so likes now, just gotta knows likes what sorta Dino-answer does you give Dino-girl Stella when she sez to you....." Now YOUR the REAL Dino!" ?

DG: Pallie, what else could any self respectin' Dino-holic dad such as myself do but laugh and say " If you say so squirt!"

DMP: Now, likes how cool is that....so this all makes me wonderin' what Dino-plans and Dino-provisions you are makin' for the formal Dino-education of your girlpallie Stella and your boypallie Nicky?

DG: Well pallie, I guess I'll just lead by example. They get the Dino-vibe pretty good. I'll keep on playin' my tunes and showin' my flicks and I got a hunch that they will get more and more attracted to the Dino ways of livin' the good life, without me pushin' anythin' on em'. They're pretty bright wee Dino-ones! Just like their Pop! Ha!
Posted by dino martin peters at 7:12 AM

Great to see those youngsters loving our Dino!

Hey pallies, I echo your sentiments Miss AOW...all it takes is one generation to introduce the next generation to our Dino to keeps the Dino-love flowin'...and certainly our Danny G. is settin' a stellar example of leadin' his boy and girl pallies in the way of Dino! Keeps lovin' our Dino!

I think its so cool Dannys children are enjoying Dino from such a young age.
If I have children I want them to dig Dino as much as I do

Hey pallie, Deanager Levi coulda notta agree with you more dude...very very cool that Danny G.'s boypallie Nicky and girlpallie Stella are already sold out to our Dino! I'm sure man if you likes have kiddies of your own they will be so so Dino'focused knowin' your deep, pure, and true Dino-devotion! Keeps lovin' our Dino!

Thanks Ms.AOW & Levi! Just tryin' to pass the Dino-lovin' torch to the next generation! Very proud of my wee-ones!

Thanks Ms.AOW & Levi! Just tryin' to pass the Dino-lovin' torch to the next generation!