Hey pallies, likes what a great Dino-post haves we got for all our Dino-devoted pallies this Dino-day. From the Frank Sinatra devoted blog, "Blue-Eyes.com" comes superb Dino-remebrances by Mr. Ed Walters 'bout some times when our "Dino Deals 21" in 'Vegas, Baby, 'Vegas.

Below are two Dino-vignettes recalled by Walters that what brings one of those Dino-buddha-grins to your faces pallies....oh, how I loves hearin' others share their experiences of bein' with our great man, and oh, how I yearns to have been there when Dino dealt out the cards....certainly woulda made my whole life....in the words of Mr. Walters....

"Now for the players in the casino it was a special treat. Can you see the people’s faces when they’re playing 21 and a new dealer steps in and it’s Dean Martin. I would love watching their faces. It’s something they would talk about all their lives."

So enjoys readin' this amazin' Dino-memories pallies....and thanks to "Blue-Eyes.com" and Mr. Ed for sharin' these historic Dino-details with us. To view this in it's original format, just clicks on the tagg of this Dino-gram. And, ilovedinomartin also sez our thanks to the pallies at Blue-Eyes for linkin' our humble little Dino-blog ilovedinomartin to their blog for all their loyal readers to have ready access to all the Dino-action 'round this Dino-pad! Dino-enthralled, DMP 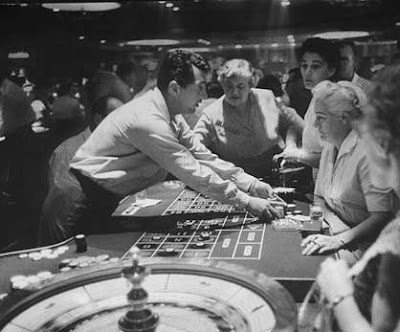 Some of the guys did deal 21 at times. Only a select few. It really was not allowed to happen per the Vegas Casino Gaming regulations, but in the early days of the Sands, as you guys know, a lot of things happened.

I don’t recall seeing Sinatra deal 21. I know you hear about it, but I can’t remember him dealing. I’m not saying it didn’t happen – I just didn’t see it. I would be surprised if he did, because he’s not the type of guy who does something unless he does it well.

Dean Martin, now he loved to deal and was good at it. I mean very good. Dealing 21 is a skill and takes a lot of practice. Dean came from Stubenville, Ohio, where a lot of our dealers came from. There was good action there. I played some high stakes pool and craps action at the Rex Cigar store. Across the river was 2 gambling joints, in Covington, Ky. The Beverly and another one.

Dean would come in the pit, usually after playing golf and practice dealing. I would put him on a live game. I mean games going on in the pit. He did great. And a great guy to work with. No ego, no putting on airs. He dealt a regular game. He had “good hands.” I would let him deal till he wanted out. When the new dealer would come in, Dean would show his hands, face open and back out like every other dealer.

Now for the players in the casino it was a special treat. Can you see the people’s faces when they’re playing 21 and a new dealer steps in and it’s Dean Martin. I would love watching their faces. It’s something they would talk about all their lives.

Some interesting things happened during those games. One day, Dean is dealing to a table of all woman. They all love it. Some would swoon and get weak at the sight of him. One lady is staring at Dean. He’s dealing and smiling. She is getting turned on. I mean really turned on. She is moaning and sighing.

She goes “Oh” – Dean goes “Oh.” She moans – Dean moans. He’s dealing around the table. She moans, he moans. She goes “Oh Oh” He goes “Oh Oh” People are seeing this. Toni, a Cocktail waitress, and some others are standing in the Pit by the table watching this scene.

The lady finally….., well puts her head on the table and rests. She is exhausted. She looks up and is embarrassed. Toni puts her tray down and starts applauding her. The others at the table start applauding too. I do too. Finally the applause stops and there is a silence.

Dean looks around and smiles and says “Thank you for the applause… It was nothing.”

A few days later, Dean comes in. I put him on a table, only two woman and a few men. Dean is getting started. Doing well. I’m arranging the chips in the rack so I know what we started with. Guy in the second seat says “That’s a nice sweater.” Dean would wear a sweater. It was summer but he wanted to protect his shoulders from the air conditioning. Dean says “Thank you.” The fellow says “I really like it. It makes you look so handsome – You are cute.”

I start walking away.

Dean Martin was a wonderful guy to work with. All of us in the casino really liked and respected him. I would say we loved him. We still do.
Posted by dino martin peters at 7:34 AM