Hey pallies, likes just loves findin' more and more Dino-lovin' all over the web. Today we turn to the blog "middlesex MD" and a chick tagged Julie for likes some heavy duty Dino-devotion. Seems Miss Julie had a grandmommy-o who snagged her and her sisters some autographed Dino-pixs and Julie like recently unearthed her copy much to her delight.

As you will read she is one sold out pallie to our beloved Dino. Loves her Dino-patter and likes all the outstandin' Dino-vids she has chosen to share with her reader. Thanks Miss Julie for your unabashed sharin' of your Dino-smitteness and for helpin' others to come to know, love, and fall head over heels for our Dino!

To read this in it's original context, just clicks on the tagg of this Dino-post. Dino-awed, DMP

My libido woke up.

This week we shoveled out a room to make room for a new hobby. In the unearthing, my husband found my long-lost, autographed picture of Dean Martin: 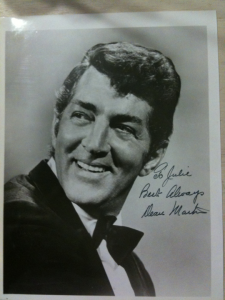 My grandmother snagged two of these, one for my sister, and one for me, in Rome, when Martin was shooting there on location. She sent them to us when we were still too young to really understand what Dean could do for us.

But at the time, we were living on a naval base in the tropics, where it was hot, hot, hot. We spent most of our time in the base movie theatre, which had a sound track that ran the same songs over and over and over again between films. That track included “Everybody Loves Somebody, Some Time.” That voice could tease desire out of even a 10 year old. It turns out.

We fell a little in love then, but a lot in love later when we returned to the States and snuck around to watch Dean Martin on his television shows, and Dean Martin movies and listened even more to Dean Martin records. We have loved him ever since.

A quick quiz among a gathering of girlfriends suggests we are not alone. Dean still does it for a remarkably wide age demographic, doesn’t he? I know it included my mother, who would be in her late 70s now. And it extends to friends in their 40s…. I wonder if he could have ever known what lust he could inspire?

Anyway. Dean’s there for you on YouTube, whenever you want him. Here’s hoping he still works for you the way he does for me:

Especially for my sister:

Memories are made of this:

This reminds me that I need a sequined pantsuit: