The biggest, noisiest and naughtiest contender in the new spystakes is The Silencers, with Crooner Dean Martin playing Matt Helm

Likes of course one of the secret agent series lifted up is our Dino playin' his Dino-self as agent Matt Helm. Below you will find the opennin' patter from the original TIME prose with the section devoted to our Dino as Helm.

Certainly very very cool to be able to read these retro words 'bout "The Silencers" and the man who brought it to life....our amazin' DINO!!!!

So enjoys readin' a blast from the past pallies. And, likes to read this whole prose in it's appearin' at M16, as usual, just clicks on the tagg of this here Dino-report. In our Dino, DMP

Time Tunnel: The Spies Who Came Into The Fold

TIME Magazine - March 4th, 1966
Movie moguls have long sought the perfect pop-art hero, the infallible magnetic moneymaker with equal pull for kids under twelve and adolescents up to and beyond retirement age. Tarzan, a perennial favourite, still takes to the trees occasionally to fight for right, but with obsolete weapons. The Wild West gunfighter endures, though an hombre who traditionally hates kissin' and gets his kicks by digging spurs into horseflesh seems equally ill-adapted to the times. The exquisitely contemporary hero is girl-happy, gadget-minded James Bond, whose legend has already tempted a host of imitators to bland larceny. Now five new spy spoofs reverently ape Bond, with more a-making to catch the rich financial fallout from Goldfinger and Thunderball. 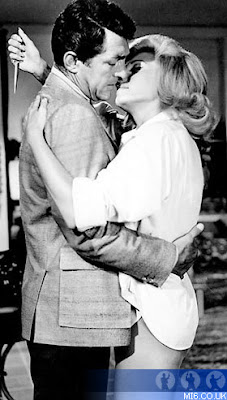 Naked Naiads
The biggest, noisiest and naughtiest contender in the new spystakes is The Silencers, with Crooner Dean Martin playing Matt Helm, a secret agent for ICE (Intelligence Counter Espionage). Its plot pits Helm against the mastermind of one of those atomic conspiracies, headquartered in what appears to be a sunken carrier under the desert near Alamogordo.

But the real contest is between nudity and gadgetry. The striptease fun, with Cyd Charisse as team captain, begins during the opening credits, then gets right down to business in Martin's circular bed, which turns, travels, tilts, finally plunges him naked into a swimming pool with a naiad identified as Lovey Kravezit. While the camera plays anatomical peekaboo, they are dried on two cylindrical Freudian symbols, then dressed and breakfasted by machine.

Innuendo roars through Silencers, with nothing omitted save scrawling feelthy pictures on the screen. Now and then, Martin sleepily warbles a song parody, his way of adding sauce to all the gleeful violence, drunken driving and self-conscious smut. Chief compensation over the Ion? haul is Stella Stevens' zany, refreshing performance as a tourist who flees a conducted bus tour and plunges into escapades with the resolute air of a girl making every minute of her vacation count.

Above: Dean Martin as the smooth-talking Matt Helm.
Posted by dino martin peters at 7:03 AM

I dig that pic, she is gonna stick the knife in.
Is it just me or does anyone else notice the way her ummm backside wobbles when she gets killed.
Luv Matt Helm, the girls and Tung Say my fav bad guy

Hey pallie, wow Levi dude, how cool of you to leaves some Dino-patter....I have not noticed how she dies...will have to pay better attention next time I gets to view "The Silencers." Knows how much you luvs Matt Helm...so how cool that this is likes the first Dino-comment you have made here at ilovedinomartin...so keeps those cards and letters, and Dino-thoughts comin' my Dino-diggin' pallie Levi!