If you didn't know I am an unabashed Dean Martin fan.

If you didn't know I am an unabashed Dean Martin fan. 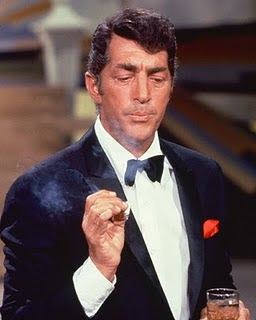 You see as a youngster of the 80s the norm was to listen to popular music, watch 80s teen films and go with the trend. I had no idea the 80s happened. I had no reference to popular culture. My attentions were towards school which I liked but wondered into creative dreamland, while being woken up with blackboard dusters imprinted on my chest.

Films were also a big part, but I tended to watch Martin & Lewis, Abbott and Costello, Presley, and Martial Arts films my Father would rent for me and my brothers as I was heavily into Karate, also participating two nights a week.

My musical background also had nothing to do with the 80s. I listened to 'Golden Oldies' on my Mother's car stereo, at home to Creedence, Joe Cocker and Janis Joplin on her Cassette tape and to horse races on my Father's car stereo. At my grandparents house I would listen to Dean Martin, One of my Grandmothers favourite.

He is my favourite singer, The baritone voice, the charisma in the words and the easy flow music that has stood the test of time. People think of Dean Martin as the fellow who sung 'That's Amore' that Italo-American song of the 50s, but Dean is much more than that. To me, he is the coolest cat that ever lived.

By far my most used quote, he is right, Human's only do things as they need to be done, not for a motivational reasoning. If I have to do something, then I just will...OR....won't. It is simply your choice, or mine.

It just displays the man's easy way at looking at life, from the music he chose to sing and how he did. If you listen to live recordings of Dean, you will truly understand what I mean. First and foremost he was an entertainer and one of the funniest comedians I have ever seen, bar, Jerry Lewis. 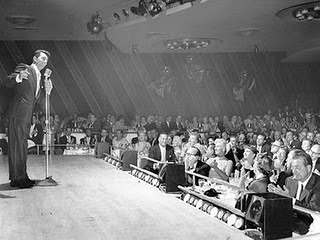 Many may not know but Mr. Martin was nominated for 4 Emmy's and 5 Golden Globes with one win, for his hit show "The Dean Martin Comedy Hour" which I have seen many episodes and they are hilarious. The show ran for 9 years from 65-74 and Dean signed the biggest contract at NBC ever. You see the man was loved and would attract guest like Orson Welles, John Wayne, Jimmy Stewart, Frank Sinatra, Bob Hope, Milton Berle, Geroge Burns, Bing Crosby...etc...you name them, chances are they were on it.

The laid back attitude is a treasure to have, something only a few years ago, I prided myself on. When I am at most happiest or in need of a cheer up, you will hear the tunes of Mr. Martin blaring through my house...Oh with myself trying to keep up with his Royalty.

I want for one day to be able to incorporate his music within a short film of mine. His music appears on more than 150 films and TV of note. I looked into using his music once, but it was a maze...but who knows...one day.

Anyhow, if you havent heard of the man, please do so, it won't let you down, get a Capitol recording, or a live recording from the Sands Casino, or a Rat Pack recording, or watch an episode of The Dean Martin Show, or a Celebrity roast and you will know what I am talking about...

"How lucky can one guy be,
I kissed her and she kissed me.
Like the fella once said,
Ain't that a kick in the head"

For IMBD Profile
Posted by DeanThirteen at 15:15
Posted by dino martin peters at 8:56 AM