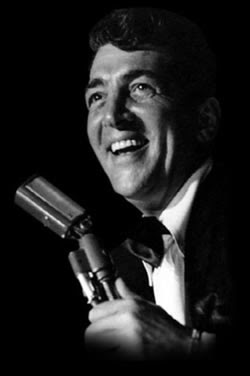 Hey pallies, likes today's Dino-love comes from the pages of the Providence (Rhode Island) Journal's online presence "projo.com." From the pen of the Journal's Pop Music Writer Mr. Rick Massimo likes comes his review of entertainer extraordinare Mr. George Thorogood. As you will read below, Mr. Thorogood is likes an all 'round entertainer....throughly good at his craft. And, likes who does George wanna be more compared to....well in his own words....‘I’m closer to Dean Martin than Jimi Hendrix’.

Ain't that just the coolest pallies....'nother of today's up and comin' modern entertainers who likes simply wants to be more and more likes our Dino! And, why not....'cause there certainly never was or ever will be anyone to wants to emulate more than our King of Cool.

Enjoys readin' this interview with George Thorogood and rejoicin' in his desire to become more and more like our beloved Dino. Thanks to Mr. Massimo for doin' this write up that puts the accent on our Dino. To read this in it's original format, as usual, just clicks on the tagg of this here Dino-gram. Dino-promotin', DMP 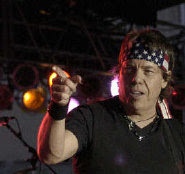 Sure, he’s had the occasional hit single such as “Bad to the Bone,” “Who Do You Love?” or “Gear Jammer,” but George Thorogood has been putting together a career one night at a time in front of one audience at a time for more than 35 years. Some artists chafe at the adjective “workmanlike,” but Thorogood doesn’t; in fact, in interviews he’s usually aggressive in his modesty about his talents, using phrases such as, “I’m no genius,” and, “I’m seeing how many coats of paint I can put on ‘Johnny B. Goode’, ” to describe himself.

Indeed, in a phone conversation he says, “I only know three licks — but I know ’em cold.”

It’s as a live act, he says, that he and The Destroyers continue to evolve. “There are new ideas coming all the time, new jokes coming to me all the time, new songs to put in the set (he’s still in the early stages of touring behind last year’s “The Dirty Dozen” disc, which paired six new songs with six older, out-of-print tracks), as opposed to getting better on the guitar. I’m a guitarist second, an entertainer first.”

The success of his albums and singles gave people the wrong impression of what a Thorogood show promises, he says. “We were a good nightclub act. And then we put out these albums with all this guitar playing, and people were shocked when I walked out on stage and told a joke or used a little shtick. ‘Why is he making a joke about the bartender?’ They didn’t get it. I’m closer to Dean Martin than Jimi Hendrix .… People see me and say, ‘This guy’s a hell of an entertainer; plus, he’s not a bad guitar player either.’ Not the other way around.”

Thorogood says the show stays fresh for him over the years because he and his band can, and do, play different types of venues all the time. He has opened for huge acts such as The Rolling Stones and Bruce Springsteen who always play in stadiums, and he says he’s seen what that kind of consistency can mean to a band. “Some of those people didn’t care for that; they said, ‘Aw, it’s boring.’ I did not. Consistency made me better.…

“[But] I’ll be in a House of Blues one night and in a casino the next night, and the next night after that I might play a proscenium theater, and the night after that a rock festival. So I always have to be on my toes. I always said that if I got the same setup every night, like Springsteen or Mick Jagger or Steve Miller, I’d be the greatest rock entertainer, just like they are.”

He’s kept essentially the same band together for his entire 35 years in the business, and that continuity has allowed Thorogood to evolve his live act, a process he says continues to this day.

George Thorogood and the Destroyers and Cadillac Martini play Friday night at 7 the Nantucket Nectars Sunset Music Series, at the Newport Yachting Center, off America’s Cup Avenue. For tickets, call (401) 846-1600, ext. 2, or go to www.newportwaterfrontevents.com.

rmassimo@projo.com
Posted by dino martin peters at 7:03 AM