Hey pallies, great news all my Dino-devoted pallies! Our Dino-holic pallie noebie(Bri Noe) has recently put up his pod cast of his trip to Dino-fest 2010 in Stu-ville at his happenin' blog pad "The Comedic Genius Of Martin And Lewis."

So, likes if you clicks on the tagg of this Dino-post you will arrive at noebie's place and be able to access his sharin' of travelin' to Dino-mecca to be with all the Dino-faithful. Besides that pallies, you will note that Bri has a totally, totally impressive list of Dino-links for your Dino-perusin' as well!!!!

Loves that Bri chose to use likes my fav of fav Dino-pixs that he took on his Dino-journey....a pix of his young girlpallie Caroline diggin' our Dino hangin' out at the Kroeger store! Thanks noebie for all your efforts in honorin' our beloved Dino and spreadin' so much Dino-love 'round through sharin' your Dino-pilgirmage to the place of our Dino's birth and raisin' Dino-reportin', DMP 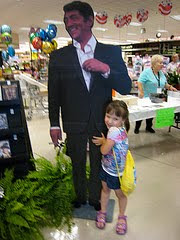 This time around, we're visiting Steubenville, Ohio for the 2010 Dean Martin Festival.

Set Up at The Spot

The Rat Pack Is Back

All Of Me Video

Picture of Drew Anthony and Claudia

Save The Grand Theater
Posted by dino martin peters at 7:50 AM