Hey pallies, likes wow dudes, today's Dino-gram is likes a totally rad read from the MOG pad from a dude tagged emscee (clicks on tagg of this Dino-post to goes there).
This Dino-centric message puts the accent on our Dino and his hip and with it comments to the Rollin' Stones on their appearance on "The Hollywood Palace" in '64.
You knows the Dino-drill pallies...it's that clip where our Dino shares his hipper then hip and groovier then groovy Dino-wisdom...

"Now.....somethin' for the youngsters. Five singin' boys from England who sold a lot of al-b-ums. Albums. They're called the Rollin' Stones. I'VE BEEN ROLLED WHEN I WAS STONED MYSELF. So, I don't know what they're singin''bout, but there they are at."

Never knew that Mr. Bob Dylan created a poem that featured our Dino...gotta say that I don't agree with Dylan's thoughts on our Dino apologizin' to the Stones...which I am certain he never did...and today I'm sure Bob Dylan as a Dino-devottee of today woulda retract dem words if he thought 'bout it. But, how cool to have Dylan include our beloved Dino in a poem on the back of one Bob's al-b-um covers! Loves learnin' more and more amazin' Dino-details of our great man!

And we also learn that our Dino and the Stones actually covered the exact same song...but of course as you listen you will discover that our Dino's version is so so much more with it then the Stones take. And, likes I just gotta mention how stellar it is to have that totally moddish pix of our Dino, Miss Ann, and his boypallie Dino Jr. and band to begins the Dino-message....

We sez our thanks to emscee dude for this provocative as well as evocative Dino-post...and for helpin' this Dino-holic and probably many others learn more Dino-details. Dino-growin', DMP 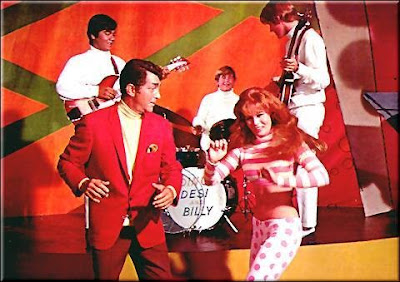 Dylan wrote that in one of the poems on the back of the 'Another Side of Bob Dylan' album, and it was obvious at the time what he was referring to, but someone buying that album now (are the liner notes still included in the cd package? maybe not) might be in the dark.

Back in the olden days, when rock artists appeared on TV, it was usually (except on American Bandstand-type shows) on network variety shows, where they were given a token slot for the youngsters (you've seen the clips of The Beatles on The Ed Sullivan Show even if you're really young, so you have some idea). So to see The Rolling Stones in 1964, you might have to watch The Red Skelton Show (did that man ever do or say anything remotely funny, ever?) or Hollywood Palace.

When The Stones first appeared on Hollywood Palace, the guest host was Dean Martin, who made a series of tasteless, condescending wisecracks about the band. This is a sample:

Well, I don't know if Dean ever apologized t the Rolling Stones, but Dylan was right, he should have, 'cause not many months later, his son Dean Martin Jr was in the pop-rock group Dino, Desi and Billy, who did some Stones covers ('Satisfaction,' 'Get Off My Cloud') and some Dylan ('Mr. Tambourine Man,' 'It Ain't Me Babe' - from 'Another Side of Bob Dylan'!! -- and 'Like A Rolling Stone,' funny on so many levels), and protest songs such as this:

Not only that, but Dino and The Stones even covered the same song, Arthur Alexander's 'You Better Move On' (posted here the other day by Randy Newman).

What I said the other day about everything being connected? Here you have proof.
Posted by dino martin peters at 7:39 AM

Hey pallie, Levi you are the man....couldn't agree with ya more....our Dino was, is, and never will be borin'....thanks dude for likes droppin' some Dino-patter...