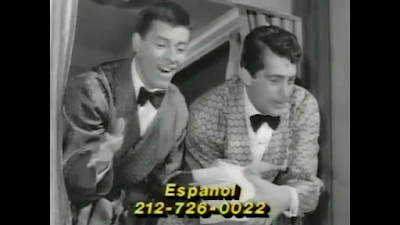 Hey pallies, likes we just wanna keeps the absolute absolute awe-filled amorin' accent on our most beloved Dino and his most beloved partner in comedy, Mr. Jerry Lewis fabulously flowin' here at our humble little ilovedinomartin waterin' hole and so likes we went on over to youtube and typed in the search engine Dean Martin Jerry Lewis Tribute and likes the vid that came up was one that we never ever knew existed and likes we are bodaciously  beautifully beyond the moon happy to sweetly share it with all youse Dino-holics.

Youse quire likes what is this vid trib....well, likes it's the most touchin' and tender tribute to our most beloved Dino that awesomely aired durin' the Jerry Lewis MDA Telethon the in the year of our Dino 1996....'bout nine months after our Dino's departure from our planet on Christmas Day 1995.  It's introduced by Mr. Ed McMahon and 'bout 12 glorious minutes fabulously featurin' our Dino and Jerry makin' funny on the big and small screen showin' their absolute amore of bein' in each other's presence.  Likes for this Dino-phile one of the hugest of huge highlights is our Dino and Jerry sharin' their croonin' of "Side By Side," bringin' the biggest of big Dino-buddha grins to our face.  There are also marvelous moments of our Dino without Jerry showin' off his tremendous talents in both actin' and singin'.

Likes the most memorable moments of this Dino-trib are afterword when we see Jerry cryin' softly over the passin' of his perfect partner and sweetly showin' his abidin' amore for our main man and tellin' the audience 'bout the namin' of an MDA clinic not far from Steubenville after our Dino for the devotion that he had to the cause as he helped Jerry in the early years of the telethon.

We are likes totally totally enthralled to have been guided by our Dino to locate this true treasure of Dino-devotion and likes only wished that we had known 'bout it long long 'go, but we are absolutely awesomely appreciative to a pallie tagged "givethechanceakid" for powerfully puttin' it up on youtube for all use Dino-philes to reverently revel in for Dino-sure.  Thanks "givethechanceakid" for your generous sharin' of what is one of the bestest of best hugely heartfelt tributes to our one, our only Dino.

Thanks also, of course, to Mr. Jerry Lewis who humbly honored our Dino in this wonderful way, showin' his ubber undyin' love for his partner in comedy.

Hey pallie, likes Danny-o, we are greatly grateful to have uncovered this deeply deeply momentous magnificent marvelous movin' vibrant vid trib to our most most most beloved Dino and the endin' with Jerry cryin' lovin tears of awesome amore for our Dino is simply the most special of special moments of Dino-devotion!