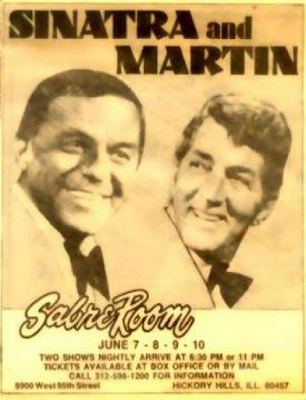 Hey pallies, likes as we were searchin' a noteworty number of delightful Dino-draft posts that we  have started here at ilovedinomartin but are yet to be published, we were Dino-directed to a youtube vid featurin' our most beloved Dino doin' his marvelous monologue as part of  one of our Dino's greatest of great gigs with Mr. Frank Sinatra at the Sabre Room in Chicagoland  in June  1977, in fact our Dino celebrated his 60th birthday with his amore of the season, 19 year old Miss Andre Boyer in the Windy City.
Likes starting at 'bout four minutes our Dino begins his beautiful backstory, his irreverent recollection of how Mr. Sinatra orchestrated  the remarkable reunion between our most beloved Dino and his most beloved pallie in comedy, Mr. Jerry Lewis.  All youse Dino-holics are goin' to wanna deeply drink of all of our Dino's  coolest of cool, hippest of hip, randiest of randy monologue, but likes 'specially of his
touchin' and tender testimonial of Frank's finest hour of after 20 years reunitin' our Dino and Jerry at the MDA telethon in 'Vegas baby 'Vegas in the year of our Dino 1976.
Also pallies, we invites you to really really revel in all the incredibly intriguin' images of our Dino and Mr. Lewis that are part of this vibrant video.
ilovedinomartin sezs our deepest of deep Dino-appreciato to a lovely lady tagged "pettyswildflowerforever" for originally sharin' this Dino-vid at youtube.  If youse clicks on the tag of this Dino-message youse will be sent to youtube to watch it there.
We Remain
Yours In Dino,
Dino Martin Peters


Dean Martin monologue about reunion with Jerry Lewis on the 1976 MDA Telephon
pettyswildflowerforever
From 'A Swingin' Night at the Sabre Room' with Frank Sinatra and Dean Martin, 1977. I own squat, not the pictures or the audio, but this is definitely worth a listen.
Posted by dino martin peters at 1:32 PM

Man! It’s great hearin’ Dean’s voice. Great recordin’ too. Sounds like he’s in the room with me... like he’s still here. I guess he is in a way, pals. His essence & vibe will be with us forever! Great post!

Hey pallie, likes Danny-o, likes we were thinkin' 'long the same Dino-lines as we were listenin' and greatly groovin' on our most beloved Dino's masterful monologue. Likes are we grandly grateful for technology that keeps our Dino alive in the longin' lives of all us Dino-holics who can never ever imbibe 'nough of our King of Cool!