Dean Martin & Jerry Lewis - Side by Side 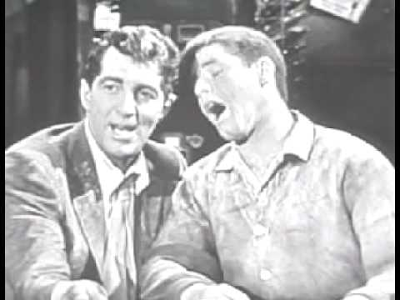 Hey pallies, likes after sharin' yester-Dino-day's touchin' and tender vibrant vid trib to our most beloved Dino and his most beloved partner in comedy, Mr. Jerry Lewis that was beautifully based on the delightful duet "Side By Side" that our Dino and Jerry stunnin'ly sang on an epic episode of the Colgate Comedy Hour, we just had to search the awesome annals of youtube to find the vid clip  from the original potent programme to share with all youse Dino-philes.

And, likes, we are totally totally thrilled that Dino-indeed we were able to lovin'ly locate and sweetly share this very Dino-day those most touchin' and tender moments of the awesome adulation that our Dino and Jerry showed in croonin' this tremendous tune.  We found it sweetly shared by a Dino-holic with the profoundly powerful heart-felt handle of "DeanMartinForever" and we are awesomely appreciative of their not only sharin' this virile vid, but of also lettin' all us pallies know that it is from the year of our Dino 1955.

Through supreme searchin' usin' the wondrous wonders of the google engine we are totally totally thrilled to share all the lovin' lyrics of this sweetest of sweetest duet:

Oh, we ain't got a barrel of money

But we'll travel along singing a song

Maybe it's trouble and sorrow

But we'll travel the road sharin' our load

Through all kind of weather

What if the sky should fall

As long as we're together

It doesn't matter at all

When they've all had their quarrels and parted

We'll be the same as we started

Just to travel along singing a song

When they've all had their quarrels and parted

We'll be the same as we started

Just to travel along singing a song

Enjoys drinkin' deeply of this  marvelous moment in Dino-history all youse Dino-holics!  And, likes thank you very very Dino-much  "DeanMartinForever" for puttin' the hugest of huge Dino-buddhagrin on our Dino-face and we know on the faces of Dino-philes every Dino-where!!!!!

btw pallies, likes if youse will click HERE youse will gets to see just a terrific ton of other Dino-vids that "DeanMartinForever" has proudly placed on youtube for our Dino-viewin' pleasure....

Dean Martin & Jerry Lewis - Side by Side

Very cool, pallie! Could watch this one ‘gain & ‘gain.