Hey pallies, likes there's more delightful Dino-news to share from November 30th that comes our way from he blog  tagged "KRQE," the tag for the home base of television channel 13 in Albuquerque, New Mexico.  The Dino-date is this last day of the eleventh month in the year of our Dino 1965.

In their prose tagged, "Today in History: November 30, the folks at "KRQE" have shared the coolest of cool candid shot of our most beloved Dino and Rat Pack pallies Mr. Frank Sinatra and Mr. Sammy Davis, Jr. 'long with fellow crooner Mr. Bing Crosby "during a recording session at Sinatra's Reprise Record Co. in California, Nov. 30, 1965."  It's a perfectly powerful pix for Dino-sure, but we gotta 'fess up that  we ain't got a clue what sort of al-b-um was bein' recorded...likes any of youse Dino-philes got a clue what the Dino-action was that day?????

We swankly salute the pallies at KRQE television station 13 for bringin' this hugely historic potently pictorial  moment in Dino-history on their 'net site and bringin' such Dino-delight to many many who are deeply devoted to our one and only Dino.  Likes, to checks this out in it's original site, simply clicks on the tag of this Dino-report. 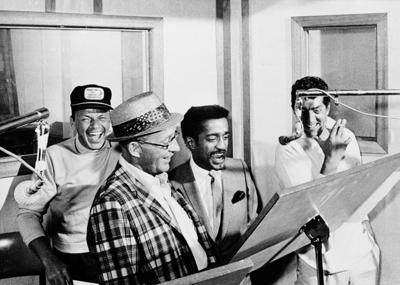 What a summit of talent!

Would LOVE to know what was recorded that day! But...either way...MAN...what a pic!

Hey pallie, likes David, thanks so much for providin' patter for us, and we absolutely awesomely agree with your Dino-assessment..."What a summit of talent!" Keeps lovin' 'n sharin' our one, our only DINO!

Hey pallie, likes Danny-o, the Dino-mystery may have been solved! Our Dino was part of a series of recordin's tagged "Reprise Musical Repertory Theater." Once of the Broadway hits in that series of releases is "Guys And Dolls," which if you clicks here:


you will note that Mr. Crosby was part of this particular recordin' 'long with our Dino, Mr. Sinatra, and Mr. Sammy Davis, Jr. We just made the Dino-connect recently and will perhaps try and do more Dino-research on these musical recordin's for a series of Dino-grams here at ilovedinomartin sometime down the Dino-road. Keeps lovin' 'n sharin' our mighty magnificant marvelous DINO!

Do you know that Bing and Dino were planning to do an album around this time for Reprise. It would have been called Bing N Dino N Dixie. There was even an album artwork done, but no album. Such a shame!

Hey pallie, likes David, we did hear of that, and we may even had done a Dino-gram or two 'bout it. Keeps spreadin' Dino-happiness!