Hey pallies, likes immensely inspired by yesterday's Dino-gram to you that fantastically featured a Dino-meme referenced in a Letter To The Editor of the "Delaware State News," we did a little Dino-investigatin' of Dino-memes on the ol' web, and we found some very cool ones, but what we also found that we decided to swankly share this very Dino-day is a completely cool caricature of our most beloved Dino sketched by an awesome artist from France, Mr. Jean-Marc Borot.

Likes we discovered the black and white Dino-image at Borot's blog "Leboblogaboro - Caricatures and illustrations, recent or even in progress, sketches, sketches ... by Jean-Marc Borot, caricaturist (of course, ahahah!)"  We were immediately supremely smitten by Jean-Marc's incredibly intriguin' image of our King of Cool, wearin' his signature tuxedo with liquid libation in one hand and ever present cigarette in the other.  There is somethin' 'bout this cool cool caricature bein' in black and white that awesome appeals to our Dino-delight!

What we discovered after checkin' to see if Mr. Borot had other Dino-artistry is that this sweet sketch was actually "in progress" and there is a completed color creation that we deeply digs as well that we will be sharin' on Monday of this next Dino-week.  We gotta 'fess up pallies that we totally totally stand in absolute awe of the  huge number of totally totally talented artists that have hugely honored our most beloved Dino with their terrific talents, and indeed, Mr. Jean-Marc Borot is one of 'em for Dino-sure.

To checks this out in it's original source, likes simply clicks on the tag of this Dino-report.  Hats off! to Frenchman  Mr. Borot for givin' all us Dino-holics such perfectly pure pleasure in our Dino-viewin'!

Caricatures and illustrations, recent or even in progress, sketches, sketches ... by Jean-Marc Borot, caricaturist (of course, ahahah!) 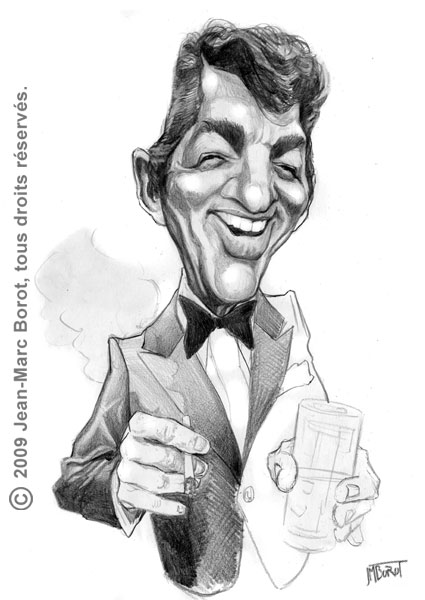 Don't think that I begin a caricature of the Rat Pack (whatever ...) or that I absolutely do the same characters as my friend Charles Da Costa. Dean Martin is "only" the subject of February contest on NCN forum.
Posted by dino martin peters at 7:15 AM

Very cool Cartoon of Cool! I actually.... almost...got a similar sketch for a tattoo a few years back. Who knows...this post may just re-inspire me!

Hey palalie, likes Danny-o, if youse does this Dino-deed, likes be sure to fill all us Dino-holics in all on the Dino-details! Keeps lovin' 'n sharin' our one, our only DINO!