....the late Jerry Lewis talks about his incredible career and his relationship with Dean Martin as described in his book Dean and Me (A True Love Story). 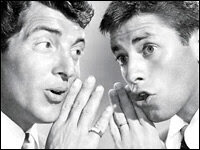 Hey pallies, likes as we continue to celebrate the lovin' lastin' legacy that was Martin and Lewis, our pallies at Twingly Advanced Blog Search sent us way of the blog home of Chicago's premier radio station WGN for their August 27 post "The Life Of Comedy Legend Jerry Lewis" posted by Mr. Joey Gelman.  Featured in this post is the 2005 radio interview that WGN's Mr. Dean Richards had with Mr. Jerry Lewis.

The amazin' awesome accent of this incredibly intriguin' interview is Mr. Lewis' talkin' 'bout his newly released bio of amazin' amore of our Dino, "Dean and Me: (A Love Story).  It is hugely heartwarmin' to hear Mr. Lewis speak so touchin' 'n tenderly of his lastin' love and awesome admiration of our most most beloved Dino.  Likes pallies, you simply MUST take the time to hear this coolest of cool conversation'

Likes we truly thanks the pallies at WGN Radio, especially Mr. Dean Richards, for bringin' back this 2005 interview of Mr. Jerry Lewis on his remarkable relationship with our one, our only Dino.  To checks this out in it's original source, likes simply clicks on the tag of this Dino-remembrance.  btw pallies, likes you can see that we tried to copy the audio link so you coulda listen to Mr. Lewis right here at ilovedinomartin, but that ain't workin'.  So, clicks on the tag of this Dino-report to listen to it at WGN.

Dean Richards shares his 2005 conversation with the late Jerry Lewis as they talk about his incredible career and his relationship with Dean Martin as described in his book Dean and Me (A True Love Story).