Lawson Bates: I would say Dean Martin is high on the list right now!

Hey pallies, likes we are always likes totally totally thrilled to find yet 'nother of today's up and comin' youthful entertainers who proudly professes their awesome appreciato for our most beloved Dino. Well, while doin' our almost daily search with Twingly Advanced Blog Search we happened 'pon the  youthful blog pad tagged "Just Jared Jr." with a recently offerin' of the post "6 Cool Facts About Lawson Bates That Will Make You Love Him Even More (Exclusive)."

In doin' a wee bit of internet searchin' we discovered that Lawson is 25 year old William "Lawson" Bates featured on the reality TV show "Bringing Up Bates," is a recordin' star, runs a company called Lawson's Lawncare,  and works part time as a Deputy Sheriff as well!  In the interview below, when Bates was quired 'bout who his fav singer/actor is, he responded with " I would say Dean Martin is high on the list right now! "

Likes that remarkable revelation, of course, brings great happiness to our Dino-hearts, to know that a terrifically talented youth likes Lawson deeply digs our Dino!   We thanks the pallies at Just Jared Jr." for this insightful interview with Bates, and to Mr. William "Lawson" Bates for opening sharin' his delightful delight in our one and only Dino.  To view the interview with Bates in total, simply clicks on the tag of this here Dino-report. 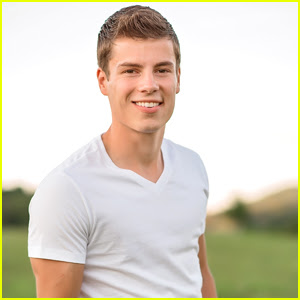 So, we don’t know about you, but we’re in love with Lawson Bates.
JJJ had the chance to speak with Lawson and his video girlfriend Sadie Robertson and found out a handful of cool facts about them both.
Like, you might not know that on top of his budding singing career and being on Bringing Up Bates, Lawsonis actually a part time deputy sheriff!
“Which sometimes means some late night hours!” he says.
ICYMI – Watch Lawson‘s brand new music video for “Past Is Past” now!

Hey pallie, likes Danny-o, as more and more of today's youth gets turned on to our most beloved Dino, we knows that the Dino-light is gonna keeps glowin' ever Dino-brighter 'n brighter each and every new Dino-day! btw, how our your boypallie Nicky and girlpallie Stel doin' in their Dino-devotion? Keeps lovin' 'n sharin' our one, our only Dino!