Hey pallies, likes after creatin' yesterday's Dino-gram we couldn't resist the op to do a bit of researchin' at the "919 Gang" blog for more Dino-mentions and we found 'nother of note at Mr. Jack J. Reber's entry "Real photo, phony caption."  Likes below are comments made by Mr. David Farmer after he and his wife and a visitor from Houston went to see our most beloved Dino's restin' place at Westwood Memorial Park in West Los Angeles.

While we have done previous  posts on our Dino's crypt before, we wanted to have 'nother opportunity to share with all youse Dino-holics a pix of where our Dino lays to rest with many of the Dino-faithful comin' to pay their respects, leavin' flowers and even coins in remembrance of our great great man.  We certainly desires to someday be able to make our own pilgrimage to Westwood Memorial Park and pays our respects as well.

We thanks Mr. Jack J. Reber for creatin' this particular post and for Mr. David Farmer relatin' his personal pilgrimage to the crypt.  To checks this out in it's original source and to read the post in total, simply clicks on the tag of this Dino-report.


DAVID FARMER writes:
My wife and I had a visitor from Houston this week, and our guest wanted to see where Dean Martin is buried. That turns out to be Westwood Memorial Park in West Los Angeles. I was glad we went, because I had no idea the small cemetery was there, or that it contains the graves of several famous performers.
Fans take pictures of the plaque that marks Dino's final resting place. They also bring fresh flowers to place in the small bronze urn attached to the marble. If you look closely, you'll see that people leave coins lined up along the top of the plaque. 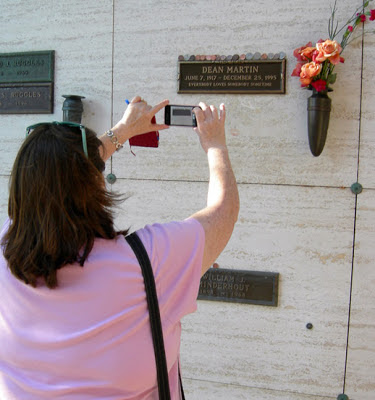 REBER: The words under Martin's name are "Everybody loves somebody sometime." To read about other celebrities in this cemetery and to see their graves, go to:
http://tinyurl.com/62b5e
Posted by dino martin peters at 7:04 AM

Must be a VERY solemn feelin'...standin' at the final stop of our great great pal. Peaceful, I'd imagine. I think...for me... it would be a depressin' moment. Not sure I'd wanna see. I'm not good with that stuff, pals.

Hey pallie, likes Danny-o, we hear you man...for us, since we never have the opportunity to see our Dino in the flesh, while he walked the earth, we hope to at least see where he has been laid to rest. Keeps lovin' 'n sharin' our most beloved Dino!

Danny G,
Must be a VERY solemn feelin'...standin' at the final stop of our great great pal.