Hey pallies, likes we are proudly pleased to share one of our pallie of pallies, Scotty's perfect posts in remembrance of the passin' of Mr. Jerry Lewis and sharin' his absolutely awesome affection for our one and only Dino.  Scotty's post comes from his beautiful blog, "BlueisKewl," and is tagged "Dean Martin, Jerry Lewis, and Marilyn Monroe at The Redbook Awards, 1953."  The perfect pose below shows our most beloved Dino and his most beloved partner Mr. Jerry Lewis both lovin' on Miss Marilyn Monroe circa 1953.

Likes it is crystal clear from this incredible image that Miss Marilyn is enormously enjoyin' the adorin' attention of both of these marvelous men.   Also included in Scotty's Sharin' are some delightful details on the life and times of our Dino,  Mr. Lewis, and Miss Monroe.  How cool of our deeply devoted to Dino pallie Scotty for helpin' his readership grow in knowin', lovin' and honorin' our main man.

We sez our thank you very much to pallie Scotty for his time, effort and deeper then deep devotion to our most beloved Dino and his faithful patterin' here at our humble little ilovedinomartin Dino-pad.
To checks this out in it's original source, likes simply clicks on the tag of this here Dino-message. 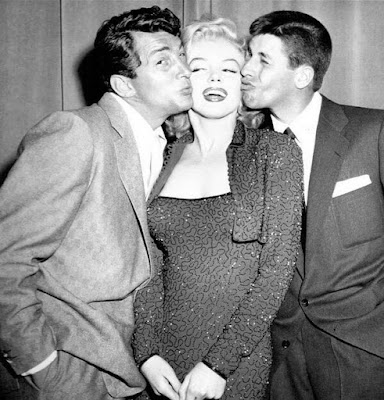 Dean Martin (born Dino Paul Crocetti; June 7, 1917 – December 25, 1995) was an Italian-American singer, actor, comedian, and film producer. One of the most popular and enduring American entertainers of the mid-20th century, Martin was nicknamed the "King of Cool" for his seemingly effortless charisma and self-assurance.

He and Jerry Lewis were partners as the immensely popular comedy team Martin and Lewis, and afterwards he was a member of the "Rat Pack", and a star in concert stages, nightclubs, recordings, motion pictures, and television. He was the host of the television variety program The Dean Martin Show (1965–1974) and The Dean Martin Celebrity Roast (1974–1984).

Martin's relaxed, warbling crooning voice earned him dozens of hit singles, including his signature songs "Memories Are Made of This," "That's Amore," "Everybody Loves Somebody," "You're Nobody Till Somebody Loves You," "Sway," "Volare," and "Ain't That a Kick in the Head?"

Jerry Lewis (born Joseph or Jerome Levitch, depending on the source; March 16, 1926 – August 20, 2017) was an American actor, comedian, singer, film producer, film director, screenwriter, and humanitarian. He was known for his slapstick humor in film, television, stage and radio. He and Dean Martin were partners as the hit popular comedy duo of Martin and Lewis. Following that success, he was a solo star in motion pictures, nightclubs, television shows, concerts, album recordings, and musicals.

Lewis served as national chairman of the Muscular Dystrophy Association and hosted the live Labor Day weekend broadcast of the Jerry Lewis MDA Telethon for 44 years. He received several awards for lifetime achievement from the American Comedy Awards, Los Angeles Film Critics Association, Venice Film Festival and Academy of Motion Picture Arts and Sciences, and was honored with two stars on the Hollywood Walk of Fame.

Marilyn Monroe (born Norma Jeane Mortenson; June 1, 1926 – August 5, 1962) was an American actress and model. Famous for playing comic "dumb blonde" characters, she became one of the most popular sex symbols of the 1950s and was emblematic of the era's attitudes towards sexuality. Although she was a top-billed actress for only a decade, her films grossed $200 million by the time of her unexpected death in 1962. She continues to be considered a major popular culture icon.
Posted by dino martin peters at 7:37 AM

As always DMP I want to thank you for your continued support in my postings of Dean. I like so many people was saddened with the recent loss of Jerry and came across this photograph of the greatest of great comedy duos with the legendary Marilyn to boot. I am sure this has been posted countless times before but I loved it so much I had to post it as well. There will never ever be another pair like Dean and Jerry. Jerry graced this earth for over ninety amazing years and of course has left so much to always treasure.

Thank you once again my friend for your kind words and continued support, it is greatly appreciated.

Thank you as well Danny G.!

A wonderful week to all.

Hey pallie, likes Scotty-o, you are most welcome man...and know our deepest of deep Dino-appreciato for your ever growin' deepest of deep delight in our one, our only Dino! Keeps lovin' 'n sharin' our most most beloved Dino!