Scotty's Sharin': The Man Who Dressed 'The Rat Pack'

Hey pallies, likes while we have been 'way from the Dino-action our pallie of pallies Scotty has posted a trilogy of very very cool Dino-devotion over at his beau-ti-ful blog "BlueisKewl."  As we tries to gets back in the Dino-groove we are feelin' completely compelled to catch all youse Dino-philes up to date with Scotty's powerful prosin' of our one and only Dino.

Likes below you will find Scotty's great Dino-find tagged "The Man Who Dressed 'The Rat Pack' accentin' powerfully potent prose scribed by Mr. Michael Quintanilla on the man tagged the "tailor to the stars," Mr. Sy Devore."

To top off his Dino-efforts, our sold-out-to-Dino pallie Scotty shares with us a classic pose of the Pack as well as a incredible image of our Dino and Jerry havin' some fun with Devore...an image, we might add, that we ain't ever remember seein' before.  We once 'gain salute our Dino-lovin' dude Scotty for spreadin' some Dino-love over at his blog...helpin' more and more of his remarkable readership in the growin' awesome adulation of our most beloved Dino.  To checks this out in it's original source, simply clicks on the tag of this here Dino-report.

The Man Who Dressed 'The Rat Pack' 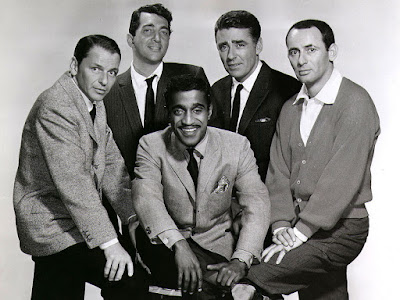 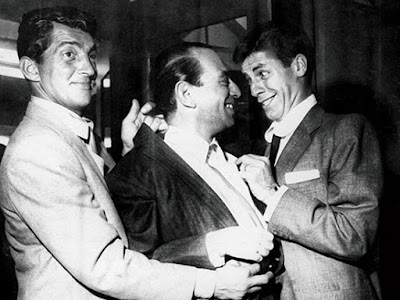 Dean Martin and Jerry Lewis turn the tailoring tables on Sy Devore at his Hollywood Store,  1955.


Sy Devore was known as the 'tailor to the stars' before his death in 1966 and was nearly as famous as the men he dressed.


A vintage poster of the Rat Pack--Frank Sinatra, Dean Martin, Sammy Davis Jr., Peter Lawford and Joey Bishop--hangs at the Sy Devore store in Studio City. The debonair babe magnets are dressed in hip threads that made them the Mack Daddies of 1960s cool: sharkskin suits, skinny ties and tailored dress shirts.

To look at the guys, you'd think they were decked out in the spare contemporary silhouettes of Prada. The fabrics are fine, the fit immaculate, details noteworthy. Dino's collar is slightly higher on the neck, Sammy's trousers are pencil thin and Frank's lapels are exactly 21/4 inches wide--just the way each ordered their clothes from Devore.

Known as the "tailor to the stars" until his death in 1966, Devore was almost as famous in Hollywood as the men he dressed. But he made his biggest fashion impact with the martini-gulping, wisecracking, Hollywood-Palm Springs-Las Vegas-hopping Rat Pack. They came to Devore's on Vine Street near Sunset Boulevard, just around the corner from the Brown Derby restaurant, to shop as well as hang out.

Not much of the Rat Pack's style is seen in the new version of their 1960 heist caper "Ocean's Eleven," which opens today. Because the movie is set in today's Las Vegas, costumer Jeffrey Kurland gave George Clooney, Brad Pitt, Matt Damon and the other actors individual contemporary looks rather than copy the Rat Pack style in the original. Devore created many of the suits for that flick's costumer, Howard Shoup."Our movie is far more character-driven," says Kurland, a stage and film costumer for 23 years who has worked on 16 Woody Allen movies. "But from the original film, I saw lots of personal style in the Rat Pack guys," a look that captured the glamour and fantasy feel of Sin City. "And I wanted that feeling to come across with the clothing. We didn't want to put the guys in flip-flops and shorts at the crap table."

Instead, Kurland put Clooney in casual outfits such as three-button sport coats, open-collar shirts, no ties, Pitt in elegantly tapered suits and shirts that have a European look and Damon in preppy khakis and crew-neck pullovers.

Devore probably would have been pleased with Kurland's workmanship--all 300 garments in the movie were made the Devore way: hand-tailored. That included Andy Garcia's formal wear and stunning vests crafted from antique kimonos as well as Elliott Gould's '70s disco shirts, neck scarves and cheesy matching swim sets.

In his day, Devore and his staff custom tailored clothes for more than 100 films, according to Marti Devore, 53, his niece who operates the store now. Her father, Al Devore, a partner, ran it when Sy Devore died at age 57 of a heart attack. Sy was survived by his second wife, former actress Erika Peters and adopted daughter, Lisa, who was 12 when he died and isn't involved in the business today.

A close friend of Martin and Jerry Lewis, Sy Devore costumed all of their movies as well as many that starred Elvis, who would often shop off the rack at Devore's, taking 15 suits--size 42 regular--at a time. Ricky Nelson, taking his cues from his dad, Ozzie, also wore Devore clothes on and off screen.

In the 1960s, Devore opened a store in Fashion Square Mall in Sherman Oaks. He also opened one in Palm Springs and another in the now-defunct Sands Hotel and Casino in Las Vegas for the Rat Pack who were known to fly to Vegas on a whim with nothing but the clothes on their backs. In 1961 it was reported Devore grossed more than $1 million a year.

Three stores were closed in the '80s, leaving only one in the San Fernando Valley. Last year, the store moved to Studio City from Fashion Square Mall.

Flipping through pages of scrapbooks, Marti vividly recalls how at age 10, she and her older sister, Tawny, would pretend to be mannequins and goof around with the Rat Pack when they came to shop. "They'd come to the shop just to see their buddies," Marti says about the Rat Pack, who shopped in good company. Bob Hope, Milton Berle and Jimmy Durante were regulars, too. "They'd crack jokes, try out new material on each other, on the workers, even on customers."

Marti was always there because her father was Sy's bookkeeper. Al passed away at 63 in 1974 from complications from a triple heart bypass. Marti, then 27, took the helm. Today she runs the business with partners Danny Marsh, 43, and Leonard Freedman, 75, who worked with the Devore brothers.

She's not surprised that her uncle, born Seymour Devoretsky in Brooklyn to Russian immigrant parents, became a clothier. Her grandfather, David, was a tailor who had his own shop in the 1920s that was frequented by jazz musicians

The Rat Pack was a group of actors originally centered on their leader, Humphrey Bogart, until his death in 1957. By the 1960s, it was the name used by the press and the general public to refer to a later variation of the group that called itself "the Summit" or "the Clan," featuring Frank Sinatra, Dean Martin, Sammy Davis, Jr., Peter Lawford and Joey Bishop; they appeared together on stage and in films in the early 1960s, including the movies Ocean's 11, Sergeants 3, and Robin and the 7 Hoods (in the last film, Bing Crosby replaced Lawford). Sinatra, Martin, and Davis were regarded as the group's lead members.

As we all know some of the very best dressed men in the entertainment world was the 'Rat Pack', of course the one and only Dean Martin was a card carrying member in high honor. I was luckily enough come across this interesting article that gave us insight into the man that was behind the men that looked so good. Thank you DMP and Danny G. for your support and in bringing the latest and greatest DM news on 'ilovedinomartin'