Hey pallies, likes we are attemptin' to catch youse all up on our great great pallie Scotty-o's great great devotion to our one and only Dino.  Below is the second of Scotty's trio of delight Dino-grams shared at his blog "BlueisKewl" over the time when we were absent from active Dino-duty.

Likes this post accents 'nother of the Rat Pack big screen efforts "Robin And The Seven Hoods."
Scotty has shared a powerful publicity pose of our Dino with pallies Frank Sinatra and Sammy Davis Jr. as well a pix of an original advert poster that we don't ever remember seein' before.  In addition our most Dino-devoted pallie has shared some pertinent patter includin' delightful details that are new to us and perhaps youse as well.

Once 'gain, we say thank you very much to our pallie of pallies Scotty for his marvelous mission of bringin' more and more of our Dino to his blog readership.  To checks this out in it's original source, simply clicks on the tag of this here Dino-report. 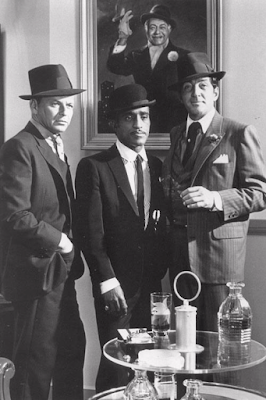 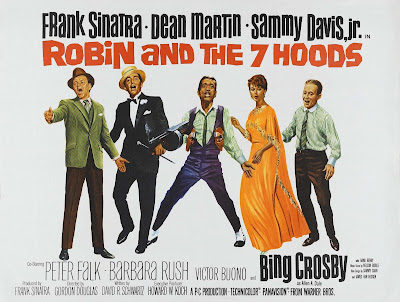 Written by David R. Schwartz, the film transplants the Robin Hood legend to a 1930s Chicago gangster setting, though this story's utterly opportunistic Marian is very different from the faithful Maid Marian of the original legend.

Produced by Frank Sinatra, the film introduced the hit song "My Kind of Town" by Jimmy Van Heusen and Sammy Cahn, which was nominated for an Academy Award for Best Original Song and achieved a career of its own independent of the film.

Peter Lawford was originally cast as Alan A. Dale, but was replaced with Bing Crosby following a break in Sinatra's relationship with Lawford. The break stemmed from a scheduled visit to Sinatra's home by Lawford's brother-in-law, President John F. Kennedy during a 1962 West Coast trip.[Attorney General Robert Kennedy, who was long concerned about Sinatra's rumored ties with underworld figures, encouraged the President to change his plans and stay at Crosby's home, which (it was maintained) could provide better security for the President. The change came at the last minute, after Sinatra made extensive arrangements for the promised and eagerly awaited presidential visit, including the construction of a helipad. Sinatra was furious, believing that Lawford had failed to intercede with the Kennedys on his behalf, and ostracized him from the Rat Pack. Sinatra and Lawford never spoke again, and Sinatra never endorsed another Democratic candidate. Ironically, Crosby, a staunch Republican, ended up cast in Lawford's role.

Robin and the 7 Hoods was filmed in November–December 1963. According to Robert Osborne, primary host for Turner Classic Movies, this was a very troubled production for Sinatra due to two outside events, so much so that he considered not completing the film. Close friend President John F. Kennedy was assassinated, and Sinatra's son, Frank Sinatra, Jr., was kidnapped and held for ransom only weeks later.

Thank you DMP once again for your continued support. I was lucky enough to come across this publicity photograph including the one and only Dean Martin. You really never know what you will stumble upon when searching high and low for new and interesting material. I am more then happy to be able to contribute in some small way to 'ilovedinomartin'. :-)

My best to everyone.