Hey pallies, likes dudes with today's post we will be, we thinks, all caught up with sharin' our ever-devoted-to-Dino pallie Scotty's recent energetic efforts on behalf of our main man at Scotty's main pad "BlueisKewl."  Likes the subject of his most recent post is a quintessential quartet of incredible images of our most beloved Dino with his most beloved partner Mr. Jerry Lewis havin' some fantastic fun with the lovely and talented actress Miss Audrey Hepburn.

Accordin' to Scotty, the pretty poses were shot in the year of our Dino 1953 when the duo of Martin and Lewis were at the zenith of their cool comedic capers.  Likes what a perfect pleasure it is to see this terrific trio of stunnin' stars enjoyin' each other's company to the max.  We thinks that we have seen and probably have posted each of these coolest of candids before, but we ain't ever remember havin' altogether in one place before.

Likes, we are so so tremedously touched by the on-goin' energetic efforts of our pallie of pallies Scotty-o for his many many efforts to share his deepest of deepest delight in our Dino with his blog readership and with us.  Hats off to our ever-growin-in-Dino-adulation Scotty and may youse continue to spread more and more awesome amore for our one and only Dino at your beau-ti-ful blog.   To checks this out in it's original  format, as usual, simply clicks on the tag of this here Dino-report. 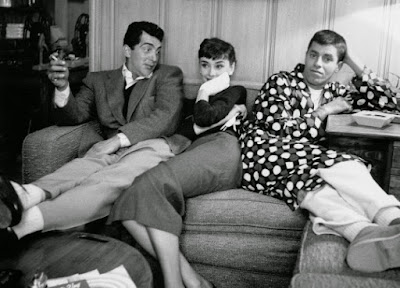 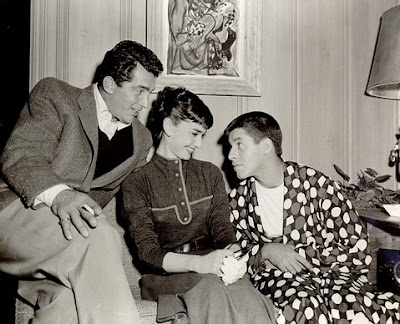 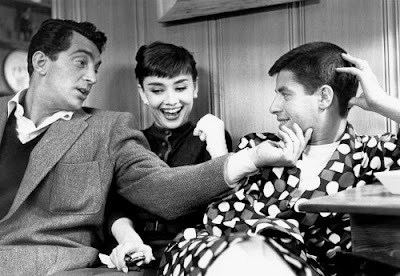 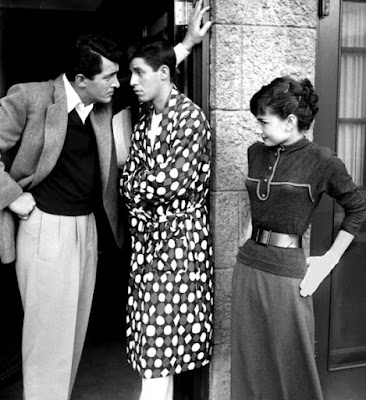 Dean Martin (born Dino Paul Crocetti, June 7, 1917 – December 25, 1995) was an American singer, actor, comedian, and film producer. One of the most popular and enduring American entertainers of the mid-20th century, Martin was nicknamed the "King Of Cool" for his seemingly effortless charisma and self-assurance.

Audrey Hepburn (born Audrey Kathleen Ruston; 4 May 1929 – 20 January 1993) was a British actress. Recognised as a film and fashion icon, Hepburn was active during Hollywood's Golden Age. She was ranked by the American Film Institute as the third-greatest female screen legend in Golden Age Hollywood and was inducted into the International Best Dressed List Hall of Fame. Born in Ixelles, a district of Brussels, Hepburn spent her childhood between Belgium, England and the Netherlands, including German-occupied Arnhem during the Second World War where she worked as a courier for the Dutch resistance and assisted with fundraising. In Amsterdam she studied ballet with Sonia Gaskell, before moving to London in 1948 to continue her ballet training with Marie Rambert and perform as a chorus girl in West End musical theatre productions. She spoke several languages, including English, French, Dutch, Italian, Spanish and German.

Posted by dino martin peters at 8:19 AM

Man o man...I am TOTALLY diggin' these postins' , Scotty! Thanks again for sharin'!

I was lucky enough to come across this small group of photos of Dean, Jerry and Audrey and loved how fun and relaxed everyone was in them. I appreciate that you were able to post them on 'ilovedinomartin' DMP and i am glad that you enjoyed them as well Danny G.

I hope everyone manages a happy weekend.