Hey pallies, likes our pallie of pallies Scotty returns once 'gain with 'nother hugely honorin' of Dino post at his beau-ti-ful bountiful blog "BlueisKewl" and this time we ain't late for the show as it just went up recently there.

Likes this time 'round our Dino-diggin' dude has outstandin'ly outdone him self by swankly snaggin' a half dozen groovy gif images of our most beloved Dino created from some coolest of cool celluloid
created in the year of our Dino 1953 as our main man is arrivin' at NBC to film an episode of the  'Martin and Lewis’ Colgate Comedy Hour.'

We totally totally stand in awe of these gorgeous gifs of our gorgeous giant of a man, showin' us Dino gettin' out of his cool cool convertible  and beginnin' to make his way to the studio.  Seein' this insightful images makes us yearn more and more to return to the days when Dino walked the earth.  This images are truly as timeless as our Dino and viewin'  'em makes us more and more grateful to be sharin' the life, times, and teachin' of our one and only Dino here at ilovedinomartin.

We solemnly salutes our ever-growin'-in Dino pallie Scotty-o and we simply can't find 'nough words to say our thanks for all he has done, is doin', and will continue to do to spread the deepest of deep devotion to our Dino at his personal blog....helpin' a ton more folks gettin' to knowin', lovin', and honorin' our most most beloved Dino.  Likes to checks this out in it's original format, simply clicks on the tag of this here Dino-message. 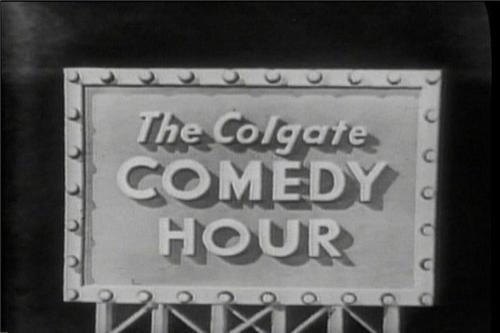 The Colgate Comedy Hour is an American comedy-musical variety series that aired live on the NBC network from 1950 to 1955. The show featured many notable comedians and entertainers of the era as guest stars.

The program evolved from NBC's first TV variety showcase, Four Star Revue, sponsored by Motorola. The "running gag" sketches were dropped in favor of more performing acts. The weekly show was proposed to be hosted by four comedians in a four-week rotation to provide competition for Ed Sullivan's Toast of the Town on CBS. The first episode, starring Hans Conried, Rosemary DeCamp and Dick Foran, was written and produced by the then 22-year-old Peggy Webber, who appeared in over 100 episodes of Dragnet with Jack Webb.

The new format was heavily backed by its sponsor, Colgate-Palmolive, to the tune of $3 million in the first year, and the 8:00 p.m. ET, Sunday evening format show was a spectacular success, particularly for Eddie Cantor and the Martin & Lewis and Abbott & Costello duos. In his autobiography, Jerry Lewis wrote that the show premiered Sunday, September 17, 1950, with Martin & Lewis and was telecast from the Park Theatre off Columbus Circle in New York City. As theatres are known by different names over history, it is possible that this was the now-demolished International Theatre at 5 Columbus Circle, the broadcast location of another NBC show of the era, Your Show of Shows with Sid Caesar and Imogene Coca. In fact, Eddie Cantor hosted the first Colgate Hour on September 10, 1950.
Posted by dino martin peters at 7:04 AM

Thank you o much DMP for your support and kind words as always. When it rains it pours and in this sense that is a good thing. I stumbled on these gif's the other day and it instantly brought a smile to my face. I was amazed on how young and good looking Dean is here. I was really taken with Deans convertible too, as well as the other cars in the background. The search goes on. A thank you as well to Danny G. :-)