Incredibly Intriguin' Image Of Our Most Beloved Dino and Mr. Jerry Lewis

Hey pallies, likes as we have just remembered our most beloved Dino and his most beloved partner Jerry Lewis' beginnin's and endin's, we likes thought since the pallies at our new fav blog pad search engine "Twingly" sent us to the tumblr pad "iamdinomartins" to view an immensely intriguin' image of our Dino and Mr. Lewis in what musta been their early days together, we found offer it up for your Dino-viewin' pleasure as well.

This is one Dino-pose that we know absolutely positively that we ain't ever laid our eyes on before 'cause we know if we have seen it, we coulda never ever forgets it!  Our Dino with his ever present smoke in mouth appears to be combin' his partner's hair, while someone else may be gettin' ready to put some makeup on Lewis' face.  It's truly truly a one-of-a-kind photo and we woulda loves to know the back story behind it.  So, likes if any of youse Dino-philes have any cool clues to what, when, and where this was snapped, kindly drop us some patter to fill us in on the Dino-details.

We thanks the Dino-diggin' pallie at "iamdinomartins" for sharin' this incredibly intriguin' image of our Dino and Mr. Lewis at their tumblr blog makin' it accessible for us to share it with all youse Dino-holics.  To checks this out in it's original source, simply clicks on the tag of this her Dino-gram. 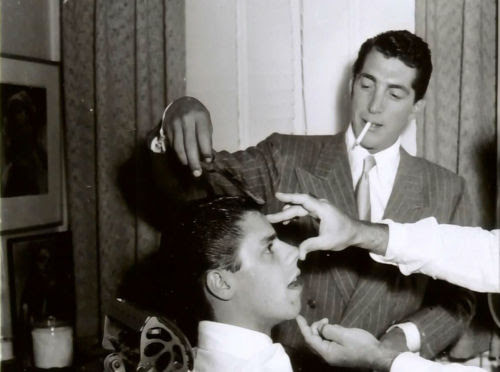 Cool pic, pal! Thanks for sharin'.

A great find and capture DMP. One never knows what is around the corner!