"The Best Thing About Dean's Place....Dean." 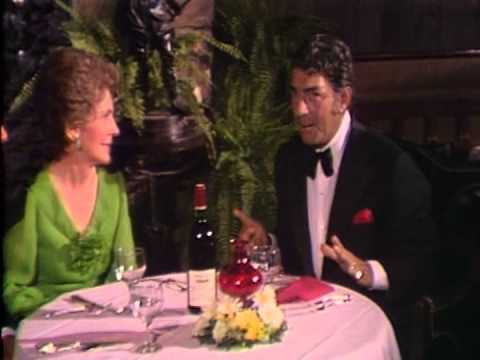 Hey pallies, likes we have often 'fessed up that our particular fav Dino-era is the '70's Dino....when our Dino cut loose and openly let his personal life 'come congruent with his  entertainin' persona.  His sideburns grew longer, his threads more and more mod....and  his swinger swagger the coolest, hippest and most randy ever.

A great example of the '70's Dino can be found in today's devotion from the new-to-ilovedinomartin pad "The Land of Whatever," where blogger "hobbyfan" has shared the youtube vid clip of the 1975 Dino-special "Dean's Place."  Below you can read "hobbyfan's scribbin's  on this Dino-effort, but  we wants to share 'bit of our perspective as well.

Early in the program the "new" Golddiggers take center stage at our Dino's nightclub tagged beau-ti-fully "Dean's Place" and sing the absolute truth that "The Best Thing About Dean's Place....Dean."
And truly truly pallies, the best thin' about "Dean's Place is DEAN!   Attired in his elegent tux with ever present cigarette and liquid libation in tow, our most beloved Dino is absolutely fabulous makin' the club scene with a bevy of stellar stars and tremendous talent that is new...and crackin' jokes likes "We're the only club in town that validates hangovers."

We never ever can gets 'nough of seein' our Dino makin' the scene and he is just the grooviest in this very special special....just wishes that "Dean's Place" had taken off as a series.  As the vid is only 'bout 30 minutes we are wonderin' if likes if there was a croonin' part of the show that was removed 'cause of copyright 'cause we just can imagine our Dino doin' a show without usin' his fabulous voice to woo and coo us.

ilovedinomartin thanks "hobbyfan" for sharin' this most special of special Dino-treat with his readership and thus with all us Dino-philes.  This is definitely the our swingin' man at his most swingin'.  To view this in it's original source, simply clicks on the tag of this here Dino-report.  Dino-groovin', DMP

A year after his variety show had ended, Dean Martin wanted to try something different to complement his Celebrity Roasts. So, Martin and producer-director Greg Garrison came up with Dean's Place, the setting of which was a lavish Beverly Hills nightclub. The idea was that Martin wanted to showcase some new talent, such as comedians Kelly Monteith and Kip Adotta, who would make the rounds in the latter half of the decade, and, as memory serves, Monteith even got his own show----on CBS!


Too busy, if you ask me, as this was actually trying to do two things at once. Wouldn't ya know, the Muppets would perfect the format a year later.......

Rating: C.
Posted by dino martin peters at 7:13 AM