As you may read below, Keith's lifestyle was forever altered while in college "during a late night that involved a marathon of Matt Helm films starring Dean Martin."  As Keith pontificates further..."Anyway, after a refined evening of watching Dean Martin slide ass-first down a railway whilst waving a ray gun over his head, I decided I wanted to start upping my style game. Less dumpster diving skate punk, more mod meets cocktail culture with a dash of rockabilly."

Likes how fabulous is that dudes....likes 'nother tremendous true-life testimony of how comin' under the influence of our most beloved Dino is likes a forever transformin' experience....likes once youse encounters our Dino (in the words of "Since I Met You Baby), you're a different man!  We stunnin'ly salute Keith for boldin' sharin' his "Dean Martin Awakening" with his readership, surely helpin' many to cover over to our Dino's side...the coolest of cool side that is.  To checks this out in it's original format, per usual, simply clicks on the tag of this here Dino-report.  Dino-awakened, DMP 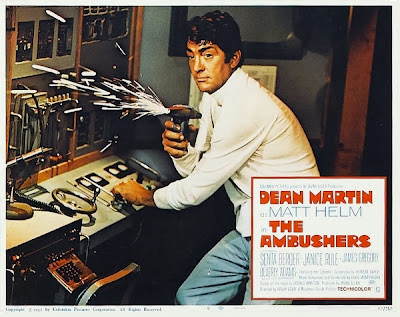 I was in college when it hit me during a late night that involved a marathon of Matt Helm films starring Dean Martin and culminated in a pre-dawn viewing through bleary eyes of Mario Bava’s Danger! Diabolik — very possibly the experience that birthed Teleport City in general. I was, at the time, an impoverished punk rock college kid living on thirty or forty bucks a month, usually with disconnected power and phone in my one bedroom apartment in Gainesville, Florida. Until that night, youthful rebellion against “the suits” had led to my wardrobe being composed of a couple pairs of cut-off cargo pants, one pair of jeans, one pair of ratty black Chucks, and like fifty band shirts in varying degrees of disintegration. I cut my own hair — blindly and badly — had glasses that were bigger than my face, and clocked in at maybe right around 105 pounds and 5’7”. Which is to say not only was I (and still am) a nerd, I was a nerd with a body type that was, at the time, very difficult to clothe in anything that looked like it was actually made to fit me rather than something I stole from a much larger person’s wardrobe.

Plus, like many skinny kids, I was under the erroneous impression that wearing huge clothes made me look less skinny (they don’t, but we’ll get to that later in this series). Anyway, after a refined evening of watching Dean Martin slide ass-first down a railway whilst waving a ray gun over his head, I decided I wanted to start upping my style game. Less dumpster diving skate punk, more mod meets cocktail culture with a dash of rockabilly. I know, I know. Mods and rockabilly together? Impossible! But I live in America. We fought a war so we wouldn’t have to worry about whether or not mod and rocker goes together.

There were a few obstacles between me and my newfound desire to own a pair of wingtips and a slim-cut suit. First, as I mentioned, I was pretty broke. Not out on the streets and dying broke. Not four kids and no way to care for or feed them broke. I was broke punk rocker broke, which in the grand scheme of things, is a pretty manageable sort of broke, especially in a town like Gainesville where you could show up at the drop of a hat at any number of friends’ houses and be guaranteed a couch to sleep on and a sack of Taco Bell to tide you over until you got some cash. So I would not want to imply that these were dark and desperate times. I was just broke, as many twenty-year-old kids are. Certainly too broke to pop down to the local haberdashery to pick up a few new suits of clothing to match my new sartorial aspirations. That’s if we had a local haberdashery.

Even if I had the means, I did not have the vocabulary to express what I wanted. This was Gainesville, Florida, circa 1992. There was an Internet, but just barely, and only five people were on it. This was before fashion blogs, the dandy revival, and Queer Eye for the Straight Guy. It was hard to walk into a Sears or Old Navy with a picture of Sean Connery in Goldfinger and find what I was looking for. I did not know the words. What is that kind of suit called? What are those shoes? No idea. And the days of department store clerks being all Are You Being Served? was long gone. if I went to Dillards, I was not going to find John Inman and Captain Peacock waiting to take my hand and guide me through the morass and toward a better-dressed future. I was going to find some minimum-wage schlub who knew nothing, just like me.

What a great read! Thank you for bringing this story our way!