Martin is worried about telling Lewis that he's drawing the "Vincent the Vulture" comic because "then we'd be through as pals,"

Hey pallies, likes here is still 'nother installment of great Dino-readin' from Mr. Jaime J. Weinman self-tagged blog, "Something Old, Nothing New - Thoughts on Popular Culture and Unpopular Culture  by Jaime J. Weinman."  We followed a link in his post that was published yesterday, "ARTISTS AND MODELS And Its Mysterious Missing Plot Points," and discovered "Lucky Berkeleyites," where Weinman made what appears to be his first observations, he tags 'em "A few random points on Artists and Models."

Scribed  in April of 2008, it surely  shows us how observant Mr. Weinman is 'bout one of his, and our most fav flicks.  We won't  take any glory 'way from your Dino-readin' pleasure, and simply simply encourage you to enjoy Jaime's well written words of wisdom.

'Gain we takes our hat off to Mr. Jaime J. Weinman for sharin' 'bout "one of those movies I just love".....our most beloved Dino and his most beloved partner in "Artists And Models."  To checks this out in it's original format, simply clicks on the tag of this Dino-gram.   Dino-delightedly, DMP

If you're in or near the Bay area (and I'm not saying you shouldn't be), the University of California at Berkeley is holding A week-long Frank Tashlin retrospective. There have been a bunch of these recently, but all south of the border (the Canadian border, I mean); I especially recommend next Wednesday's screening of Artists and Models because while the DVD version looks fine, I have a feeling that the otherworldly riot of color would look even better on a big screen in a dark theatre.

A few random points on Artists and Models while I'm at it, since this is one of those movies I just love (there are greater movies, maybe even better movies by this director or these stars, but there are few other movies that are more fun), because none of them are worth a separate post in themselves:

1) The plot of Artists and Models, if you look at it rationally, has so many holes in it, even for a comedy, that the script would be thrown out of any screenwriting class. Some of this is probably due to cutting; it's a long movie and some scenes were cut for time (including Shirley MacLaine's solo "Bat Lady" dance, which appears to be lost), and I imagine some of the deleted scenes would explain why Eva Gabor's character starts out thinking that Dean Martin is the person she needs to seduce and then, without any explanation for how she found out the truth, switches to trying to seduce Jerry Lewis. But there are various other unexplained plot points, things that are brought up and then never referred to again (Martin is worried about telling Lewis that he's drawing the "Vincent the Vulture" comic because "then we'd be through as pals," but this is never addressed), and stuff that just makes no sense, like how can Martin's character draw a best-selling comic book under his own name without Jerry Lewis's character finding out about it? You just kind of have to go with it; it's like a '50s throwback to many silent and early sound comedies that were very loosely structured and informal and didn't ask to be judged by classic principles of story structure. But you can see why Jean-Luc Godard fell in love with Artists; the idea that a movie can ignore all rules of storytelling logic, and get away with it if the individual scenes are entertaining enough, must have been very encouraging to him.

2) The publicity photo of Martin, Lewis, and the four top-billed women in the film (all dressed, of course, by Edith Head, who did some of her best work on this picture), appears to be the one Shirley MacLaine was talking about when she wrote that Jerry Lewis was a real jerk during the taking of a cast publicity photo with these six participants. Apparently he tried to essentially direct the taking of the photograph and tell everybody where to stand and what to do. Viewed that way, it's kind of a metaphor for why their partnership broke up: Jerry standing there trying to control everything, Dean looking a little ticked off. (Click to enlarge). 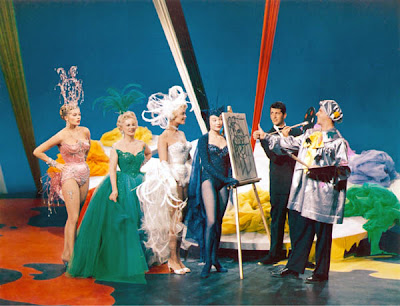 3) I notice that while Shirley MacLaine's character is called "Bessie Sparrowbush" in the film, many cast lists give the name as "Sparrowbrush." I wonder if somebody sneaked the name "Sparrowbush" past the censors by deliberately misspelling it in the cast list.

4) When I tried to research this film I didn't come up with much (to find out anything about its production I'll have to wait until I can look at Hal Wallis's papers, which are housed at the Motion Picture Academy's library), but I did find a Sheilah Graham column, complete with a quote from producer Hal Wallis, revealing that the part of Dean Martin's love interest was originally offered to Lizabeth Scott, a longtime Wallis contractee who had already been Martin's vis-a-vis in Scared Stiff. Scott turned down the script, upon which Martin asked for Dorothy Malone, his other love interest from Scared Stiff. That same year, Martin also made You're Never Too Young opposite Diana Lynn, who had been his love interest in the two My Friend Irma movies.