Hey pallies, likes today is 'nother great day to be a proud Dino-holic.   Well, likes we know that every single day is a great day to show our devotion to our Dino, but today is simply stellar day to celebrate the life, times, and teachin' of our most beloved Dino 'cause we have 'nother fabulous piece of deep, pure, and true Dino-devotion to share.

From the pages of one very cool  blog, "Neatorama," comes a post shared by  a Miss Cellania, managing editor" of said blog.  The Dino-honorin' post as a guest post scribed by none other then our most-devoted-to-Dino pallie Mr. Eddie Deezen, "actor, comedian, and voiceover artist" extraordinaire.

Over the course of time, ilovedinomartin has shared a number of powerful posts by Mr. Deezen that accent our Dino in the hugest of huge ways includin' Eddie's wisest of wise words rememberin how "DEAN MARTIN KNOCKS THE BEATLES OUT OF #1 SPOT - AUGUST 15, 1964.  This post was most recently shared on the 50th Anniversary of this greatest of days in the life of our Dino.

Today's Dino-feature is 'nother extraordinary effort on Eddie's part...."12 Things You Might Not Know About Dean Martin."   While there is only one of Deezen's Dozen of Dino-facts that we don't remember seein' in print before, it is particularly a fabulous Dino-read for those young in their Dino-devotion, and even more so for those who may be learnin' 'bout the life, times, and teachin's of our Dino for the very first time.

And, 'though we hardly ever include comments 'bout the posts we share, we are makin' a very special exception this time 'round 'cause none other then Mr. Neil Daniels, head of the "Dean Martin Fan Center' has caught Eddie's post and shares even more great Dino-facts includin' a couple that we had never heard before!

We here at ilovedinomartin salute Mr. Eddie Deezen for such a well scribed piece of prose and sensational  selection of pixs all hugely homagin' our most beloved Dino.  We thanks Miss Cellania and all the pallies at neat nook "Neatorama" for bringin' this guest post our way and helpin' a ton more pallies gets groovin' on our main man.  And, we say our thanks to Mr. Neil Daniels for his on-going work of Dino-devotion at the "Dean Martin Fan Center" as well as his rich response to Deezen's words.  To checks this out in it's original format, simply clicks on the tag of this here Dino-gram.  Dino-always, ever, and only, DMP 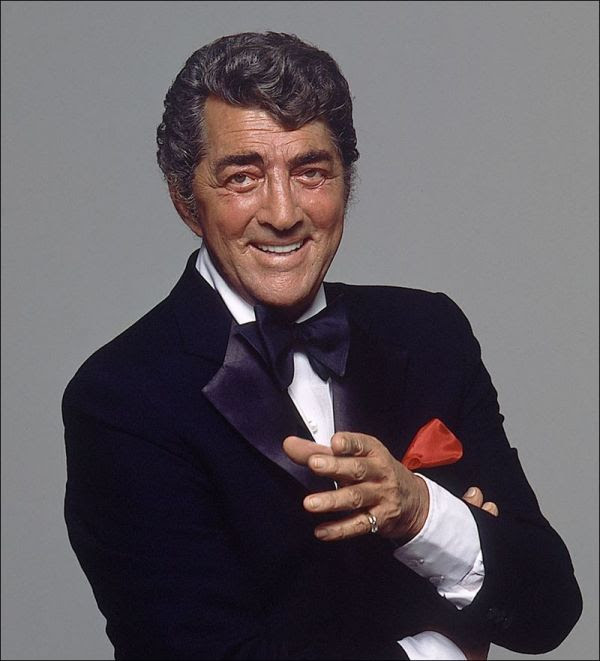 Neatorama presents a guest post from actor, comedian, and voiceover artist Eddie Deezen. Visit Eddie at his website or at Facebook.
During his heyday, Dean Martin was the coolest guy in the world. He was a movie star, had a hit TV show, was the king of the nightclubs, and he was one half of the most popular comedy team in the history of show business. Dean's records sold in the millions, but his greatest joy in life was his beloved golf. Dean was a very complicated man, although he appeared to be very simple. Let's take a look at Frank "Old Blue Eyes" Sinatra's best pal, Dean Martin- "Old Red Eyes.”

1) He didn't speak English until he was five.

Dean martin grew up in a very Italian family and never spoke a word of English until he was five years old.

Yes, Dean Martin- the bad boy, the drinker, the ladies' man, was, indeed, a Boy Scout. He was the drummer for the local Boy Scout band in Steubenville, Ohio. 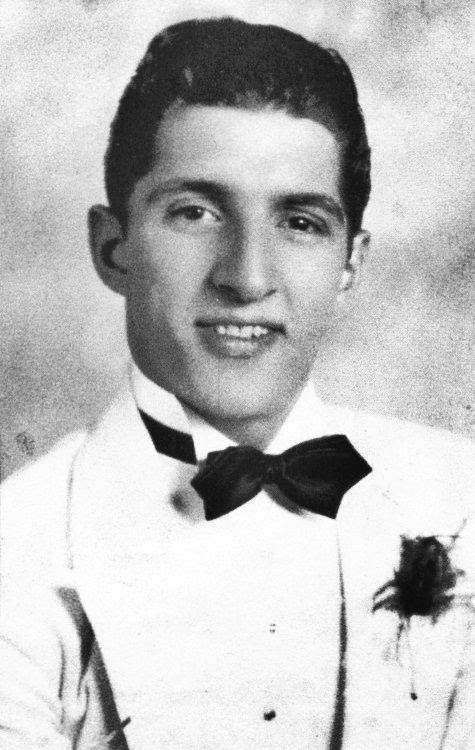 3) He was once an amateur boxer.

Fighting under the name “Kid Crotchet,” Dean was reputedly a very good welterweight boxer. His record, according to one source, was 24 wins and 6 losses in 30 bouts.

Dean was so broke in his early years, he and a friend would stage fights in their hotel room and charge people to watch. Supposedly, they would often fight until one of the combatants knocked the other one out.

4) He changed his name twice.

5) He hated the Martin and Lewis movies.

Although Dean appeared in 16 very funny movies with his comedy partner, Jerry Lewis, Dean said he always "hated" the Martin and Lewis films.

“They were Jerry Lewis movies,” he said, “I played an idiot in every one.”

6) He loved his comic books. 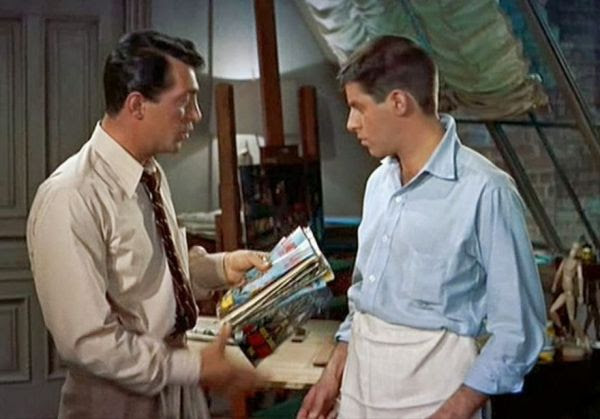 Dean was never a heavy reader, but he loved his comic books. Too embarrassed to buy them for himself, he would have Jerry buy them for him. Jerry would slip them to Dean in private, then Dean would go to his dressing room or to some private spot and enjoy them. 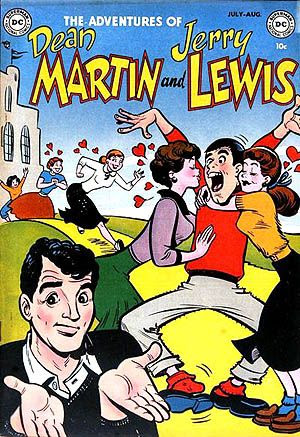 7) He only read one book in his entire life.

Dean admitted that the only book he ever read in his life was Black Beauty.

Although he had the image of a swinger, Dean always hated parties.

“I was shy,” he said candidly. Another time, Dean said, “I was ashamed of the way I spoke.”

9) He called the police on his wife's party.

Once, Dean's wife, Jeannie, was throwing a party at the couple's Beverly Hills mansion. As usual, Dean went to his room alone to watch some TV.

As the party grew louder, Dean called the local police and said he was a neighbor and claimed there was a loud party going on at Dean Martin's house and could the cops come and get them to quiet down. The police showed up and the party broke up because of Dean's anonymous call. 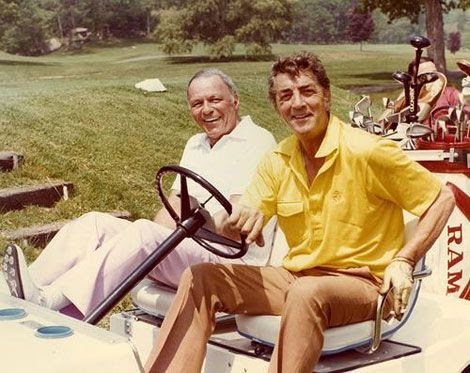 In 1968, Dean signed the biggest contract in the history of show business. He signed a three-year contract for $34 million to do three more seasons of his hit series The Dean Martin Show.

But this was a very unique contract: since Dean hated rehearsing, he would not have to show up all week to rehearse the show. A stand-in took over Dean's role at rehearsals, while Dean played golf Monday through Thursday. He'd look over his lines during the week, but mostly he'd golf. Then on Friday, he would show up and tape the show.

11) He always said his prayers.

Surprisingly, perhaps because of his "bad boy" reputation, Dean was a devout Catholic. He said his prayers every night before he went to bed.

12) He had a severe case of claustrophobia.

Dean was absolutely terrified of close spaces. He almost always refused to ride in elevators (“It's a like a coffin in there,” he said). Reputedly, Dean once walked 18 flights of stairs to avoid riding the elevator.

Eddie... FINALLY you wrote something I know a little bit about...none other than the greatest entertainer in the world, Dean Martin! For over two decades now I have been presiding over "The Dean Martin Fan Center."

Actually, I go way back with Dino to the beginning of his TV Variety Show years. You see, I started in my teens as an Associate VP at NBC where Dean taped the show. We did a LOT of shows from those studios in Burbank... Rowan & Martin's Laugh-in, The Flip Wilson Show, The Tonight Show starring Johnny Carson, The Midnight Specials, Hollywood Squares, Sanford & Son, Chico & The Man, The Elvis Comeback Special, all the Bob Hope Specials, The Mac Davis Show... well you get the idea.

The one show I use to always "hang around" was Dean's show. Over the course of 9 years (and 9 more after that on his Celebrity Roasts specials) I think I only missed being there ONE week.

While everyone my age was into "acid rock", I was into Dean... Frank... Ella... Tony Bennett... Mathis.... Steve Lawrence... etc. Dean was the nicest and actually funniest man I ever met. Talk about real talent! I never would have thought that after all these years, Dean would still be "with me" in spirit working to keep his "flame" alive.

There are even more things people might not know about Dean... like he was always put on the right side of his guest stars because he was so use to working on that side with Jerry... or that he hosted the first Muscular Dystrophy telethon with Jerry way back in those golden years.

Dean's tuxedo was specially made by Sy Devore with the collars being made a little taller and the sleeves a little bigger to hide Dean's big hands that he bruised and battered when he was an amateur boxer under the name "Kid Crochet".

Eddie... thanks for writing an article on Dean... as time goes on, it's important that the younger generation know what a truly talented man Dean Martin really was! I can't wait to see what you write about next!

Hey pallie, likes indeed Danny G. this is a great primer for those new to the Dean Scene. Keeps lovin' our most beloved Dino!

I knew all but Number 9: He called the police on his wife's party.

According to this link, our Dino played the drums in his Boy Scout troop.