Hey pallies, likes 'pon discoverin' yester-Dino-day's "Artists and Models patter from Mr. Jaime J. Weinman, likes we remembered 'nother fine post we had by Weinman 'bout this same Dino-subject.
So, through the magic of google blog searchin' we rediscovered the wonderous prose below that Jaime had written way back in December of 2008 at his self tagged  blog "Something Old, Nothing New - Thoughts on Popular Culture and Unpopular Culture  by Jaime J. Weinman."

While we had left a comment with Mr. Weinman at the time, we realized that we had never ever shared this with the ilovedinomartin blog readership before, so no time likes the present to do so.
What makes this particular prose so intriguin' is that Jaime as he states in his tag for the post, accents "ARTISTS AND MODELS And Its Mysterious Missing Plot Points."

As you will read below, Weinman "picked up (for $2.99) a copy of an issue of Screen Stories magazine, a movie fan magazine that specialized in publishing the stories of recent movies in short-story form."  And that particular mag accents "Artists And Models."  It's very very cool how with the help of this issue of Screen Stories Jaime is able to do a great job of explain' some of the hows and whys of the "mysterious missing plot points.

We, as huge huge fans of "Artists And Models" were psyched to have 'gain come 'cross this particular post and be able to share it with all youse Dino-philes.  We salute Mr. Jaime Weinman for his 'specially good scribin' skills in this very informative piece of Dino-literature.  To checks this out in it's original format, simply clicks on the tag of this here Dino-report.  Dino-learnin' and growin', DMP


ARTISTS AND MODELS And Its Mysterious Missing Plot Points 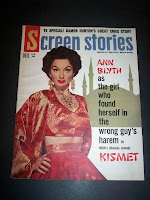 You all know I'm something of an Artists and Models junkie, and I've always been a little frustrated by the lack of material on it: no DVD extras, little background information, few contemporary articles (as another Martin & Lewis movie, it didn't get much promotion other than alerting people that Dean and Jerry were back again), not even a trailer -- there was a print of the trailer auctioned off on Ebay last week, but I got outbid. Drafts of the scripts and correspondence are presumably available in the Hal Wallis archives at the AMPAS library, but I haven't had an opportunity to go there yet.

In the meantime, though, I picked up (for $2.99) a copy of an issue of Screen Storiesmagazine, a movie fan magazine that specialized in publishing the stories of recent movies in short-story form. (This format would be replaced by the full-length novelization.) The writers for Screen Stories would work on their adaptations based on a copy of the screenplay, but they were not always told about changes that had been made to the script after they got their copy, or scenes that were filmed but cut prior to release. That means that sometimes a "Screen Stories" version will contain dialogue or plot points that were cut from the movie. The Artists and Models adaptation was in this issue I picked up, and in lieu of a script, I thought I'd look at it to see if there were any story points that would clarify some of the perplexing plot gaps in the movie.< As I mentioned in a previous post, the plot sort of falls apart in the third act because the spies inexplicably switch from pursuing Dean Martin to pursuing Jerry Lewis -- without ever actually finding out that Lewis is the one who actually created Vincent the Vulture -- and also because Lewis never finds out that Martin has been turning his dreams into a comic book. (Brief plot recap: Lewis has dreams about a lurid superhero adventure; because he talks in his sleep, Martin writes the dreams down and secretly turns them into the kind of ultra-violent comic book that warped Lewis's mind; a detail from Lewis's dreams turns out to be identical to a secret government formula, and both the Russians and the Feds want to know more about the source of this comic book.)

If the Screen Stories piece is based on the script, then there was supposed to be a scene that would have cleared up both of these points. It's in the scene before the Artists and Models ball, where Rick (Martin) is helping Eugene (Lewis) get ready, while an evil Russian spy (the improbably cast Jack Elam, who apparently loved this change-of-pace part) listens in. In the film, the scene just has Rick and Eugene doing the old comedy fancy-dress routine ("I can't keep this dicky down, Ricky!") followed by Rick telling Eugene that he'll meet the "Bat Lady" at the ball, followed by a cut to Elam listening in. But the scene was apparently supposed to be longer: while looking for an article of clothing, Eugene discovers a copy of the "Vincent the Vulture" comic with Rick's name on it, leading to the following dialogue:


EUGENE: You've been working for Murdock! How could you write a thing like this?

RICK: But I didn't write the book. I just drew it.

EUGENE: Then who wrote it? I want to know who's got the dirty, filthy, nasty mind to dream that story up.

RICK: All right, you have. You dreamed it up. That story is out of your little subconscious. That's what you talk when you talk in your sleep. But don't worry, I didn't cheat you. Half the loot's in the bank in your name.

EUGENE: You mean I dreamed this dirty, nasty, filthy story?

RICK: You got talent, Eugie. You're Steubendale's Edgar Allen Poe.

Then the Jack Elam character was supposed to overhear this, which explains how the Russian spies know that Eugene, not Rick, is the creator of Vincent the Vulture.

I don't know if this scene was cut from the movie due to length (at 108 minutes it's unusually long for a M&L comedy) or if they just ran out of time to film it; because this movie went over budget, several scenes were planned but not made. It seems strange that one of the parts they would choose to do without is the part that's necessary for the whole plot to make sense, but that's Artists and Models for you; it's not a movie where logical resolutions or sensible plot construction are very important. If they had to choose between cutting this scene and cutting the dicky scene, I kind of see why they went for the latter -- in this movie at least.

It wasn't planned that way, and I know that I'm really excusing away some serious flaws of storytelling, but the story problems just don't matter to me the way they would in a less crazy film. In the finished film, the thing that gives it some kind of coherence is not the story but the sense of mounting strangeness; every scene is a little more outlandish than the last, as if the movie starts off making fun of Eugene's "wild comic-book dreams" and ends up becoming one. The Godard comparison is still one that sticks with me; Pierrot Le Fou, which I've called his most Tashlinesque film, starts out with a story that makes some kind of logical sense and winds up as a series of wild stream-of-consciousness cartoon sequences.

Not that there aren't plenty of improvements in the finished film. In this version, when Rick runs out looking for Eugene, who is dressed in a giant mouse costume, and Sonia, dressed as the Bat Lady, he asks "Did a woman in a bat costume and a tall thin rat come out?" In the movie, Eugene is dressed in a heavily-padded mouse costume so that Rick can say one of my favorite lines ever: "Did a bat and a fat rat come out here?"

Also it seems like the original script probably had more references to the idea that comic books are genuinely bad for children -- in one scene as recapped in Screen Stories, Rick sees kids acting violent due to the influence of his Vincent the Vulture comics, and that gives him the impetus to quit drawing the comic. (The scene where he quits is in the movie, but with very little setup.) Tashlin really wasn't kidding about not liking mass-market newsstand comics; at the time the film came out, he gave a short interview where he tried to draw a distinction between good cartooning, which is what he did, and violent trashy comics ("I don't know why kids would read that when Treasure Island is so much more exciting"). But because a lot of the anti-comics lines didn't make it into the final film, the movie as it stands has an almost even balance between anti-comics satire and satire of people who are againstcomics, making it a more good-natured and interesting look at the cultural moment than it might have become.

If the recap is accurate, there was also supposed to be a scene at the Artists and Models Ball which would explain how Dean Martin gets back together with Dorothy Malone and why she arrives with the federal agents near the end of the picture. This is pretty well expendable, though; neither of those things really need explaining. But it seems a shame to lose any scene with Malone in her ball costume, perhaps my favorite of all the many great, surreal Edith Head costumes in the film. (In a strange way it does seem to convey the idea that if you crossed a prim comic-book artist with a Vegas showgirl, this is what she'd wear.) 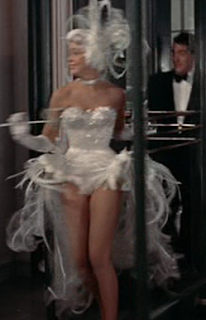