Martin and Lewis play roommates, one a suave stud, the other a childlike idiot. 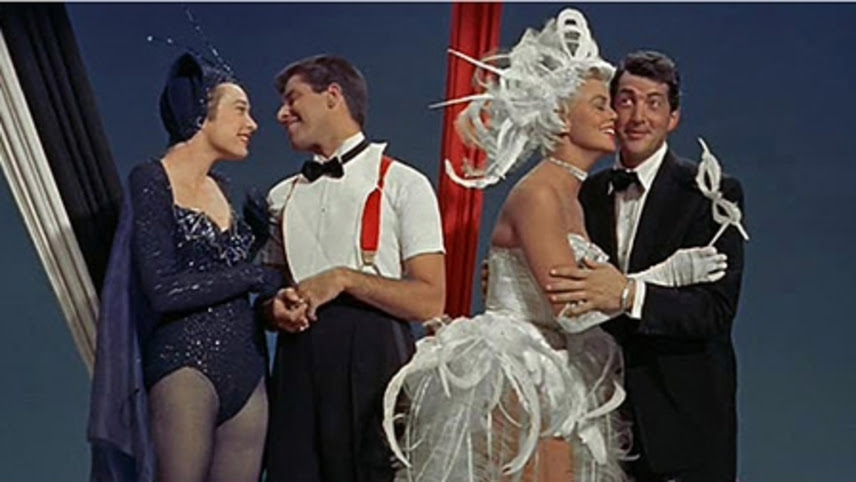 Hey pallies, likes how cool is it that the minin' of one piece of Dino-treasure will often led to more Dino-gold as well.  Case in point.  Just the other day on Monday of this very Dino-week  we shared with you a bit of Dino-funnin' from the blog, "MIGHTYGODKING DOT COM" that featured a random page from one of the Dino and Jerry comic books.  Well, likes as we often do, we thought we would just search the site for more Dino-delight...and indeed likes we found some!

What we uncovered was a powerful post scribed by Mr. Jaime Weinman who seems to be as smitten as we are by that great great Martin and Lewis classic big screen flick, "Artists And Models."  the "MIGHTYGODKING DOT COM" pad obviously is a place that often accents comic books and truly truly "Artists And Models" is like the filmed comic book 'bout comic books.

We likes totally totally digs the prose and vid clips that Mr. Weinman has assembled in stunnin'ly speakin' of his passion for what we too consider to be our most beloved Dino and his most beloved partners bestest of bestest film.  Youse Dino-holics seemly need to take the time to bask in each and every word that Weinmen has put to patter!

We salute Mr. Jaime Weinman for his most well scribed review of "Artists and Models" certainly encouragin' his readership to watch this all most perfect Dino-effort.  To checks this out in it's original format, simply clicks on the tag of this Dino-gram.  And, stop back tomorrow 'cause we have found even more Dino-devotion scribed by Weinman 'bout "Artists And Models."  Dino-delightedly, DMP

My Favourite Comic Book Movie, or How To Keep the Tarnish Off Brass Knuckles
Posted by Jaime Weinman
Published in Comics, Flicks

I once described myself as an “Artists and Models junkie,” which is not a description you hear very much outside France. We all can name movies that somehow manage to bring together a lot of the things we like, and this 1955 film by Frank Tashlin, which I watched again recently, has always been the movie that sums up a lot of things I like about the movies. And one of the things that perversely makes it more interesting to me is that it’s a confused movie: though it’s a satire of comic books and the influence of comic books on children, writer-director Tashlin doesn’t seem completely clear about what his attitude is to the things he’s satirizing. So it’s not only a funny movie, it’s like an exhibit for how a movie can get away from its creators and wind up saying things they didn’t quite intend. In this case, it’s a time capsule for confused, ambiguous attitudes toward comic books at the height of the ’50s anti-comics craze.

First, some background: Artists and Models was Tashlin’s first film with the superstar comedy team of Dean Martin and Jerry Lewis. (He made one more film with the team, Hollywood or Bust, and then made six more films with Lewis starring and producing.) Martin and Lewis play roommates, one a suave stud, the other a childlike idiot; I’ll let you guess who plays which character. Lewis is obsessed with violent comic books, particularly a book called “The Bat Lady,” which he reads to find out “if the Bat Lady’s gonna blow one of the Rat Man’s heads off.” Lewis also talks in his sleep about the adventures of an entirely original superhero, “Vincent the Vulture.”

Later in the film, Martin is invited to pitch ideas to gore-crazed comics publisher Eddie Mayehoff — whose comics empire is actually controlled by his ex-wife, and who falls out with the Bat Lady artist (Dorothy Malone) for submitting a comic with “no blood, not one itsy-bitsy nosebleed… no stranglings, no decapitations.” In desperation to come up with something suitably gory, he starts pitching the story Lewis told in his sleep, and it’s accepted. He can’t tell Lewis, though (how he manages to publish a comic under his own name without his roommate finding out is something the movie doesn’t care about, and neither should we), because Lewis has been turned against violent comics and is teaming up with Malone to create a more suitable kids’ entertainment, “The Adventures of Freddie Fieldmouse.” In a parody of the Senate hearings on comic books, Lewis goes on a panel show (hosted by a real TV host of the era, Art Baker), to explain that comics ruined his life by making him “a little retarded.”

Malone’s roommate is the young Shirley MacLaine, who also acts as Malone’s live-action reference for drawing the Bat Lady character. MacLaine is obsessed with horoscopes and numerology (I mean her character is, in this case), decides that she’s destined to love Lewis. So Shirley tries to get him to stop obsessing over comic-book women and get interested in dating an actual woman.

And as if all this wasn’t enough plot, Lewis’s dreams turn out to contain a formula similar to a secret U.S. rocket fuel formula, and when the comic book comes out, Russian spies — along with sexy Hungarian commie agent Eva Gabor — descend on Martin and Lewis to try and get access to his dreams. Some fans of the film thinks it goes off the rails once the spy plot is introduced; I think it works, because it marks the point where the movie literally becomes what it originally seemed to be satirizing: these people’s lives are indistinguishable from the insane comic books that corrupted Lewis’s mind. Also it’s inherently funny to see serious-looking U.S. authority figures reading “Vincent the Vulture.”

But if the movie seems to come down on the side of wild comic-book reality, that definitely wasn’t Tashlin’s intention going into the project. Tashlin had done newspaper comics, he’d directed Looney Tunes cartoons, and he had written some excellent children’s books. All of these professions were held in more esteem, at the time, than comic books, and Tashlin really did seem to see Artists and Models as his chance to slam the shoddy, cheap comics that had made a mockery of cartooning. He even said so while the movie was in production, telling a newspaper that the movie would express his feelings about comic books, that the only good comic books on the market were “the historical classics” (which at the time meant adaptation of classic books in comics form), and that he didn’t see why kids wanted to read comics when “Treasure Island is so much better.” He said that as a cartoonist he had done some hack work to make money, but that things had gotten worse in the comic book era.

That anti-comics attitude is all over the movie, of course, since the main comic book reader is Jerry Lewis. Any movie that implies that reading comics will turn you into Jerry Lewis is making a very strong case against reading such things. In case that wasn’t bad enough, the other comic book reader in the movie is Richard (George Winslow) a kid who has been turned into a homicidal maniac by reading comic books (and who also calls Shirley MacLaine “mop-head,” which is as accurate a description of her haircut as any).

But several things happened to make the movie’s attitude much more ambiguous than Tashlin’s own. First, a lot of the anti-comics plot points didn’t make it into the movie, and the ones that did were more anti-corporate than anti-comics. Martin was originally supposed to quit comics after he sees kids imitating the violent actions of his comic book superhero. But in the finished film, he quits after seeing the way his publisher is merchandising the character:

Like most good satirists, Tashlin couldn’t ignore the absurdity in any argument, even the arguments he supported. So the anti-comics crusaders, like Richard’s mother, are portrayed as prissy fools, and Malone, the comic book artist who doesn’t want to draw superhero comics any more, is portrayed as a humorless prig who needs to lighten up. (But, like all the women in the movie who aren’t Kathleen Freeman, absurdly hot nonetheless.)

And finally, as I said, the movie starts like a semi-normal light comedy and gets more and more wild and absurd until it becomes totally insane. This is partly because Tashlin never filmed some script pages that would have tied up the loose ends of the plot. But it’s also because when you watch the movie from beginning to end, it’s like the whole story is taking Lewis’s side, turning the world into a riot of action, splashy color, sexy spies and world-domination plots, just like a comic book.

Intentionally or not, final effect is to make us feel like comics, the shame of the ’50s, aren’t really so different from movies, the ultimate middlebrow family entertainment. The ’60s and ’70s directors who loved this movie (like Jean-Luc Godard and Jacques Rivette, whose movie Celine and Julie Go Boating was sort of an homage to Artists and Models) certainly thought so.
So it’s a movie that has a lot to say about why there was so much worry and panic about comic books in 1955; it’s also a movie that, almost unwittingly, tells us why movies and comic books have now became interchangeable.

Also, it’s got a scene where a chiropractor and/or massage therapist twists Jerry Lewis’s body into a human pretzel. Which satisfies both our need for cartoon slapstick and our need to see Jerry Lewis suffer great pain.
Posted by dino martin peters at 7:13 AM