Hey pallies, likes today's Dino-gram to all youse Dino-holics likes ain't what we planned 'cause our partner-in-Dino-devotion none other then our great great pallie Danny-o of "Sunday Serenade With Dino" fame has sent us a really really cool piece of Dino-treasure to pass on to all youse Dino-philes.
Likes don't know how Danny discovered this, but it is a remarkable read that needs to get to our pallies here at ilovedinomartin asap.

What Danny found comes from the blog "Stars And Letters - Letters From Hollywood's Golden Age' where a Miss Clarissa Saunders hold forth.  Accordin' to her bio Miss Saunders is "forty-something, Amsterdam-based and a lover of classic Hollywood films. This blog is my bundle of letters, notes, telegrams, memos etc. written by or addressed to those who made movies during Hollywood's Golden Age. "

Her blog post, "Dean, you weren't very tall last night" is 'bout some telegram correspondence between Mr. John Wayne and our most beloved Dino durin' January 1969.  The subject matter of the written words between the Duke and our Dino concerns Mr. Wayne's concern of how our King of Cool joked about then vice president  Spiro Agnew durin' one of his shows.  We leave it to you to read Wayne's concerns and our Dino's response.

We wanna says our thanks to both our Dino-focused pallie Danny-o for bringin' this to our attention, and, of course, to Miss Clarissa Saunders for sharin' this hugely hugely historic Dino-literature....helpin' each and every one of us pallies grow deeper and deeper in our Dino-appreciato.
To checks this out in it's original format, simply clicks on the tag of this here Dino-report.  Dino-awed, DMP

John Wayne was one of Hollywood's most prominent Republicans. In 1968, the Republican Party asked him to run for president thinking it could profit from Wayne's huge popularity. Wayne declined as he believed people would not take a Hollywood actor in the White House seriously. So instead of running for president himself, he publicly supported Republican candidates such as Richard Nixon and Ronald Reagan (even though Reagan had been an actor too).

On 20 January 1969, Richard Nixon and vice-president Spiro Agnew took office. Wayne, who had actively campaigned for Nixon-Agnew, was not amused after friend and fellow actor Dean Martin had made jokes about the vice-president during a show. On 24 January, Wayne sent a telegram to Martin reprimanding him for his conduct. Four days later Martin sent Wayne his reply. Both telegrams can be read below. 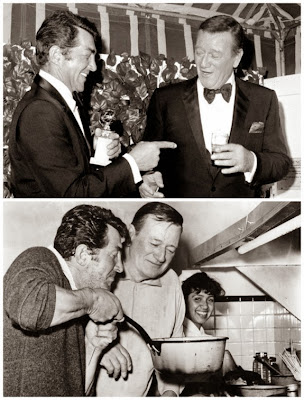 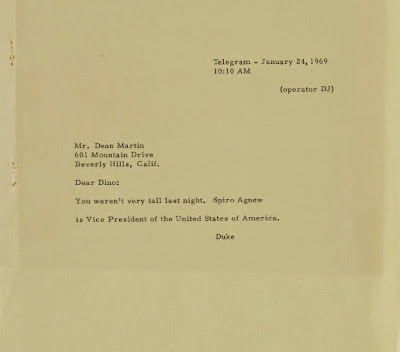 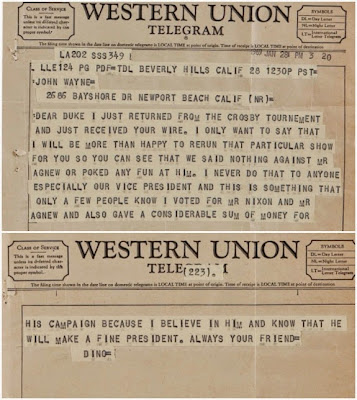 DEAR DUKE I JUST RETURNED FROM THE CROSBY TOURNEMENT [sic] AND JUST RECEIVED YOUR WIRE. I ONLY WANT TO SAY THAT I WILL BE MORE THAN HAPPY TO RERUN THAT PARTICULAR SHOW FOR YOU SO YOU CAN SEE THAT WE SAID NOTHING AGAINST MR AGNEW OR POKED ANY FUN AT HIM. I NEVER DO THAT TO ANYONE ESPECIALLY OUR VICE PRESIDENT AND THIS IS SOMETHING THAT ONLY A FEW PEOPLE KNOW I VOTED FOR MR NIXON AND MR AGNEW AND ALSO GAVE A CONSIDERABLE SUM OF MONEY FOR HIS CAMPAIGN BECAUSE I BELIEVE IN HIM AND KNOW THAT HE WILL MAKE A FINE PRESIDENT. ALWAYS YOUR FRIEND= 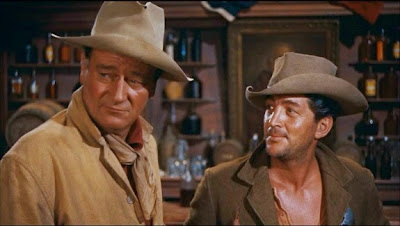 John Wayne and Dean Martin in Howard Hawks' great western "Rio Bravo" (1959). They would appear together in one other western, "The Sons of Katie Elder" (1965).

Posted by dino martin peters at 7:41 AM