Dean, especially, was a delight to watch because he never seemed to be taking any of it seriously.

Hey pallies, likes the 'net is a true treasure trove of wonderful Dino-devotion just waitin' to be uncovered and shared and today's post is a cool case in point.   While doin' some above and beyond google Dino-blog searchin' we happened yesterday upon 'nother new to ilovedinomartin blog, "lyriquediscorde -  musings of a music obsessed and caffeine fueled grown-up girl."

That "music obsessed and caffeine fueled grown-up girl" is tagged Miss Laura Morgan and just 'bout a year ago she created the post, "Sergeants 3 and Mr. Hobbs Takes a Vacation :: His and Hers Drive-In Double Feature (1962)."  The "His and Hers" refers to both a male and female take on these two 1962 big screen efforts, and likes we are assumin' that it is Miss Morgan and a male friend who are given their perspectives on both flicks.

Now, likes, we have no negative vibs 'gainst "Mr. Hobbs," but this bein a totally Dino-centric Dino-outpost, we will simply share the "His and Hers" reflections on the Dino-classic "Sergeants 3."  Right off the bat we wants to commend Miss Laura and her male friend for cool choices of images accentin' our most beloved Dino and his pallies gavin' a blast in this Rat Pack flick.  We throughly enjoys seein' both behind the scenes shots as well as well as some screen shots as well.  Likes love seein' our Dino havin' so so much fun durin' the makin' of this Rat Pack western epic.

We also very much appreciate both "His and Hers" commentary on this comedic western, but likes woulda 'fess up that it is clear that Miss Laura seems to have enjoyed the flick ('specially 'cause of our Dino!) more then her fellow-watcher and we were most delighted when she scribed, "Dean, especially, was a delight to watch because he never seemed to be taking any of it seriously. He always had that look on his face, that he was on the verge of laughing, when he wasn’t lighting dynamite off his ever-present cigarette, or downing various kinds of alcohol."  Obviously Miss Morgan is truly in the Dino-know!

ilovedinomartin is thrilled to have happened upon this great great post on one of our Dino's lesser known screen efforts and we are sure that Miss Laura has helped many of her blog fans to grow into truly Dino-fandom!  We salute Miss Morgan for all her efforts on behalf of our King of Cool.  To checks this out in it's original format, simply clicks on the tag of this here Dino-report.  Dino-always, ever, and only, DMP

Sergeants 3 and Mr. Hobbs Takes a Vacation :: His and Hers Drive-In Double Feature (1962) 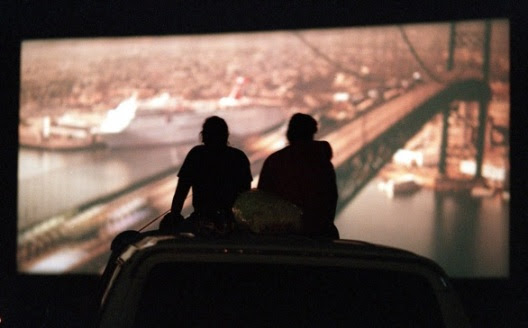 His & Hers Drive-In Double Feature :: 1962 :: Sergeants 3 and Mr. Hobbs Takes a Vacation
A lighter fare seems to be part of the choosing of this week’s His and Hers Drive-In Double Feature, both movies on the moderate scale of great filmmaking, and not kitsch, polarizing, or hard-hitting. Perhaps that is the cinematic break needed as we gear up to that “busiest time of year” that Autumn into the Winter Holiday Season tends to be. For now, we hang on to the last gasp feelings of Summer ease, and hit play on two films that are definitely more easy-going than thought-provoking, and more carefree, than challenging; sometimes that is just what we need.
The first film is a sort of “fish out of water” endeavor, what with the who’s who of the Rat Pack transplanted to 1890’s Native American territory, as Calvary sergeants, instead of the typical Vegas Lounge Lizards and Mobsters (or at least the Mobsters’ entertainers) that we would normally expect. Yeah, I shook my head and raised a proverbial eyebrow at the notion, and definitely entered into watching this one with some doubt and trepidation. Sergeants 3 is a fun frolic of a “Western“, nothing to add to any “best of” list, but enjoyable to watch Dean Martin, Sammy Davis, Jr., Frank Sinatra, Peter Lawford and Joey Bishop play a little cinematic game of “Cowboys and Indians“. 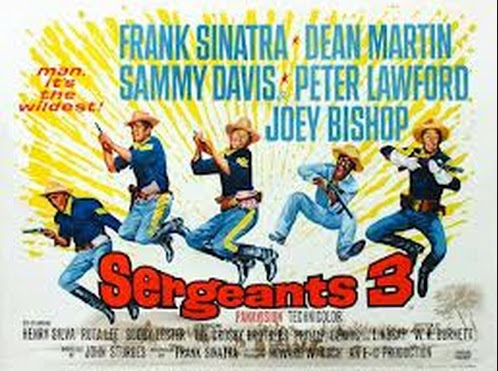 Brief history:
Sergeants 3 is a 1962 remake of Gunga Din (1939) set in the American West, directed by John Sturges and featuring Rat Pack icons Frank Sinatra,Dean Martin, Sammy Davis, Jr., Peter Lawford, and Joey Bishop. It was the last film to feature all five members of the Rat Pack due to Sinatra’s falling out with Lawford, and later Bishop. 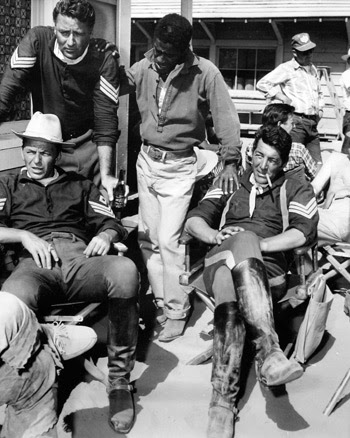 Directed by John Sturges, written by W. R. Burnett, and produced by Frank Sinatra, the movie features Sinatra in the Victor McLaglen role, Martin in the Cary Grant part, Lawford replacing Douglas Fairbanks, Jr. and Davis in Sam Jaffe’s originally titular supporting part. It was filmed in Kanab, Utah. The Thugee cult is replaced by the Ghost dancers with Michael Pate and Henry Silva appearing as Indians.
Sinatra wanted to use the title Soldiers Three but couldn’t get the rights as the title was owned by MGM for another Gunga Din-inspired story set in India. Soldiers Three was a 1951 film, based on Rudyard Kipling’s story, that starred David Niven, Walter Pidgeon and Stewart Granger. 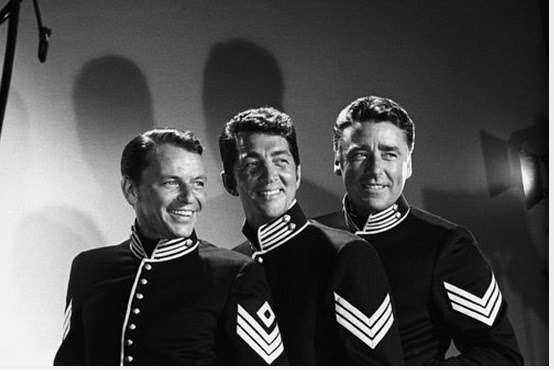 After filming was completed, the producers discovered they needed to secure the rights to the original story of Gunga Din. They were forced to pay a large fee to the copyright owners before the film could be released. 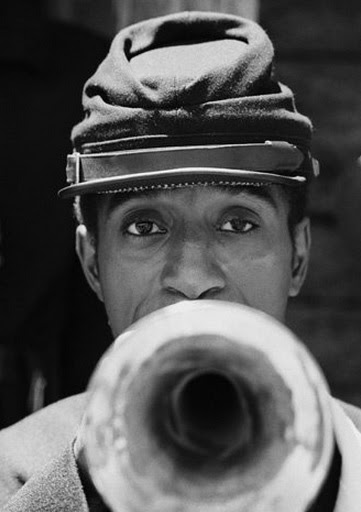 Each of the Rat Pack’s films contained a numeral in its title. The others were: Ocean’s Eleven (1960), Robin and the 7 Hoods (1964, with Joey Bishop absent and Bing Crosby replacing Peter Lawford), and 4 for Texas with Frank Sinatra, Dean Martin, Anita Ekberg and Ursula Andress as the four in the title, Charles Bronson as villain, and the Three Stooges as additional comedy relief. Sinatra said of these Rat Pack films: “Of course they’re not great movies, no-one could claim that… but every movie I’ve made through my own company has made money.” The only Rat Pack film not produced by Sinatra was Ocean’s Eleven, which earned $4.3 million in rentals at the North American box office, being ranked by Varietyas the 14th highest-earning film of 1962. 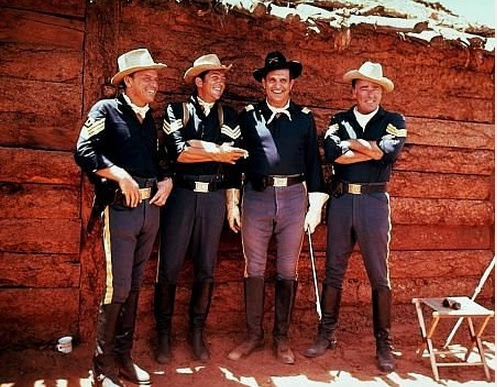 His take:
This movie is prime example of alternate universes. What if the “Rat Pack” had actually been around in the late 1800’s, and not in the 40’s. This movie answers that question. There is no real acting in this film. Everybody is just being themselves, except instead of being night club performers, they are Calvary sergeants, remarkably at a base that is staffed by nothing but sergeants, and higher. 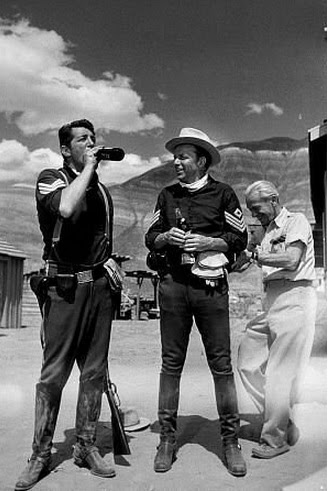 They even find a way to work Peter’s personal life into one of the side-stories. Peter Lawford married into a “money situation“, and his wife-to-be wanted Peter to break away from the “Rat Pack” scene, and his friends, much like the wife-to-be in this film wanted him to leave the Calvary, and his friends. 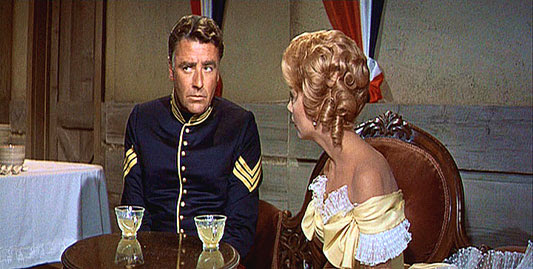 You have everyone here, Joey, Dino, Sammy, Frank and Peter. Yet no gratuitous singing scene which all other “Rat Pack” movies seemed to require. 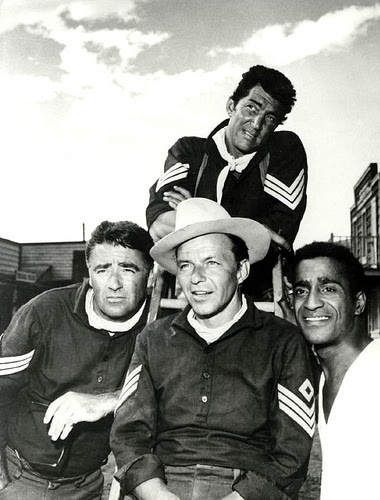 This is not a great “Western” as “Westerns” go, but it is a great “Rat Pack” film, or at least a great deviation of the standard “Rat Pack” fare. My biggest complaint, which is typical of films of this time period, they could not find one, single, Native American actor in all of Hollywood to play in the film. I mean, seriously, between the Indian role call of White, Eagle, Feather, Wolf and one who looked as if he should have been called Irving, you would think one of them would have actually been a Native American. 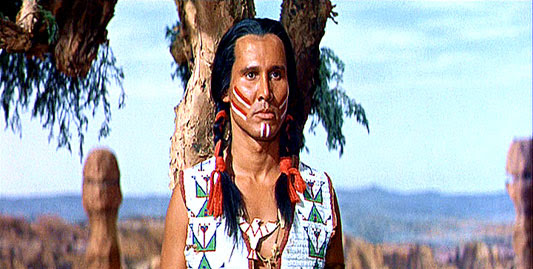 Other than that, it is not a bad film, a little slow paced at points, but a great 3 man versus horde of “Injuns” scene near the start makes up for that. Although I do have to wonder what happened to all the people from the town that the Native Americans attacked. 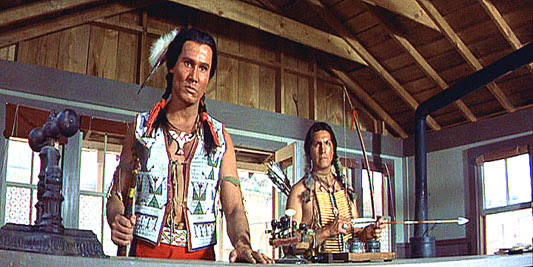 3 B rating (1 point given for Boobs, Beasts and Blood): 0 B’s - No blood, which is odd considering an entire town was slaughtered. No beasts, unless you count Joey Bishop’s horrendous accent when delivering his lines, and no breasts, but still a solid Rat Pack/Western film. 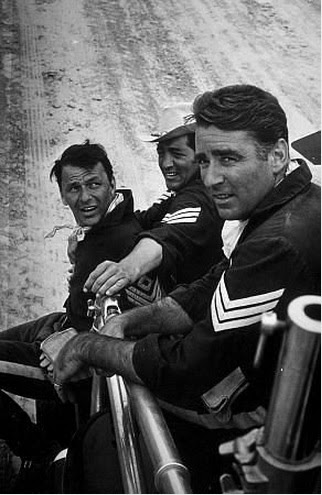 Her Take:
Honestly, I went in to the watching of Sergeants 3 expecting not to like it. The idea of the Rat Pack in the Old West in an non-ironic, non-comediac way, just did not sit well with me in terms of cinematic enjoyment. Sure, the trailer and posters touted the movie as a hilarious comedy, but the film is not anything like a Blazing Saddles, where you know going in that ridiculousness is expected. That said, the idea of Dean Martin, Joey Bishop, Sammy Davis, Jr., Peter Lawford and Frank Sinatra as Calvary Sergeants in the Old West seemed all kinds of ridiculous, and not in a slapstick, silly comedy way. 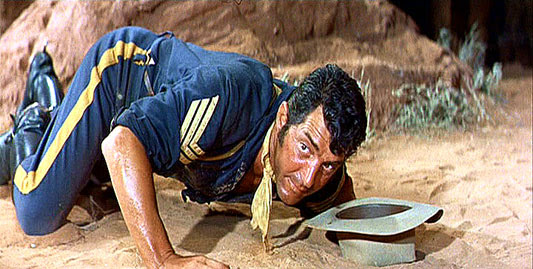 Here’s the thing, the movie is not great by any stretch of the imagination, and not all the acting is good, but watching these actors in these roles, in choreographed saloon-fights and “cowboys and indians” battles, is kind of a blast to watch. By far, it is Dean Martin and Sammy Davis, Jr.’s unlikely roles, and eventual friendship, that were my favorites of the film. 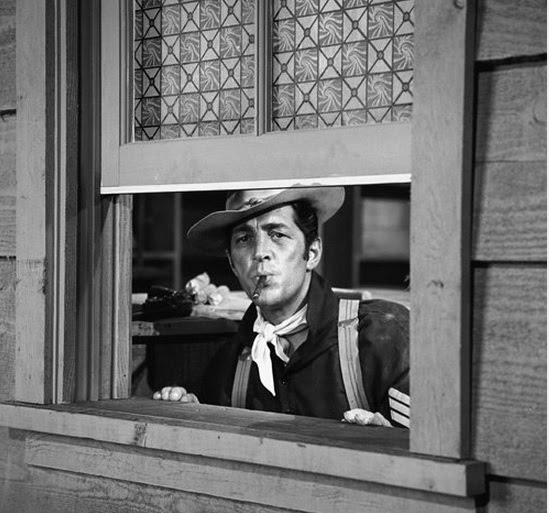 Dean, especially, was a delight to watch because he never seemed to be taking any of it seriously. He always had that look on his face, that he was on the verge of laughing, when he wasn’t lighting dynamite off his ever-present cigarette, or downing various kinds of alcohol. It was also fun to watch Sammy, who looked oh so young in this movie, play the naive, inexperienced ex-slave who is just itching to be a part of the Calvary, and the battle, instead of just playing trumpet in brawl-filled bars. 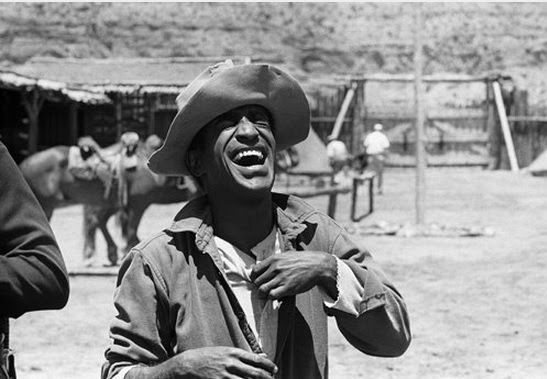 Frank Sinatra’s characters was probably my least favorite. He seemed to lack any real joy in his role, which was what I loved in all the other characters. Even Joey Bishop’s character, who is supposed to be the “play by the rules” opposite of the “Calvary Rat Pack” had his moments of humor and warmth, especially during one of my favorite moments, when Dean’s Chip tries to slip Joey’s Sergeant Major Roger a laced drink, the same that had helped bring Sammy’s Jonah’s mule back to life (what was that stuff? Cocaine? Mescaline? Ground up Peyote?)
Typical of movies of this era, the Native American’s are played by non-Native American actors, which is both annoying and distracting to me, especially when you have actors like Henry Silva, Brooklyn born Sicilian actor, playing a role like Mountain Hawk. The portrayal of the Native American’s as the villains, and crazy ones at that (believing in the Ghost Dance revenge that will kill all the white men and bring back the buffalo), is hard to digest, as well. I know, I know, it was all part of the time period, both in what the film portrays, and when the film was made, but it is still something that feels uncomfortable to watch, for me. 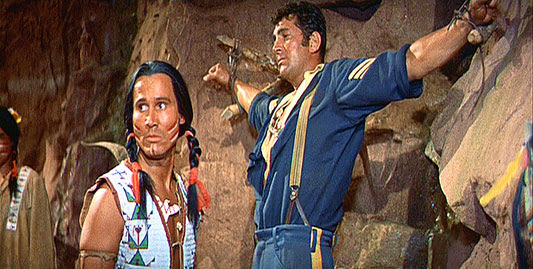 The movie, for me, belongs to Dean Martin, who stole every scene he was in. He brought humor, warmth, and a hell of a lot of drunken fun to his portrayal of Sergeant Chip Deal. Even during the fight scenes there was an element of silliness and self-awareness, that made me ponder if Dean was asking himself, “no one is going to take this seriously, are they?”. 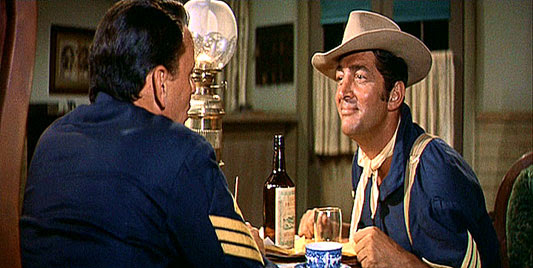 Her Rating: Out of 5 stars: I give this film 3.5 stars, mostly given to Dean Martin and the humor he brought into all his scenes. 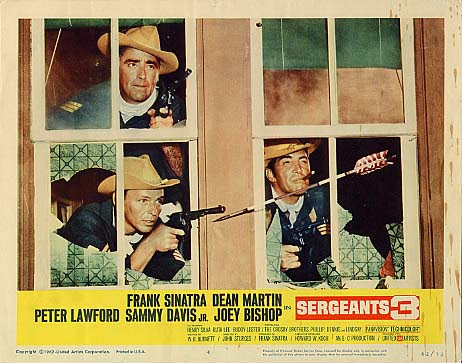 Hey pallie, likes Danny-o, very cool that you digs it...but what's there not to dig when it comes to our Dino?!?!?!?! Keeps lovin' our most beloved Dino!