ON THIS DAY IN SHOW BIZ: DEAN MARTIN DIES

Hey pallies, well our month of Dino-remembrance started windin' down. But, still a few more Dino-days to honor our Dino and his passin' on Dino-winter-day.

Today, on the 27th day of our Dino-seasonal celebratin' we thank the good folks at Hollywood Outbreak who put together this special Dino-memorial to our great man....a great pix of our Dino 'long with some Dino-bits of his life and times....AND....that stellar Dino-winter-clip of our Dino singin' the "Marshmallow Song" from a Bob Hope Winter Special.

Gotta 'fess up that I just had to share this trib to be able to one more time share my fav of fav Dino-seasonal clips....loves this version of the white stuff more then I can ever say. To read this in it's original format, just clicks on the tagg of this Dino-gram.

I am so awe struck by the many and varied tribs that our Dino always receives in rememberin' that saddest of sad days when he left us for the great beyond. The Dino-legacy just keeps glowin'and growin'....spreadin' the Dino-message and givin' Dino-cheer the world 'round. Dino-honorin', DMP

ON THIS DAY IN SHOW BIZ: DEAN MARTIN DIES 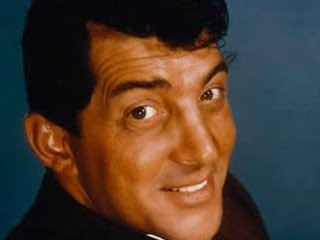 On this day in 1995, actor and singer Dean Martin dies at the age of 78. Martin was born Dino Paul Crocetti in Steubenville, Ohio, in 1917. After working as a prizefighter and a steelworker, Martin started a nightclub act. In 1946, he teamed up with comedian Jerry Lewis, and they became one of the most successful comedy duos of all time. A hit with live audiences and on television, Lewis and Martin made 16 movies together over 10 years, starting with My Friend Irma in 1949. After the duo split up, Martin launched his own TV variety show, which ran from 1965 to 1974. In the late 1950s and early 1960s, Martin teamed up with Frank Sinatra, Sammy Davis Jr., Peter Lawford, and Joey Bishop to perform in Las Vegas. The group, known as the Rat Pack, made several movies together in the early 1960s, including Ocean’s Eleven (1960), Sergeants Three 1962), and Robin and the Seven Hoods (1964).

Posted by dino martin peters at 10:44 AM

Hey pallie, agains you are so right Mr. Dana....really only one "Ocean's 11"....the other series was just wanna bes....have you made any new year Dino-resolutions?