Hey pallies, welcome back to Dino-winter-time here at ilovedinomartin on this 22nd day of our celebration of Dino-cold-out-side season. Not long now before our pallie Ed will be sharin' what promises to be a cool-ly written and warm-hearted Dino-trib honorin' our Dino on the 14th anniversary of his passin' from our presence. Be sure to checks in here at the ol' Dino-blogg on December 24 to catch Ed's Epistle.

Speakin' of our Dino-phile Ed, it was on the first day of Dino-winter-month when he wrote these prophetic Dino-thoughts...

"Scoot over Der-Bingle, Dino’s oldie but a goodie “Marshmallow World” is the “White Christmas” of the 21st century! Very similar to the late blooming “Ain’t That a Kick in The Head”, “Marshmallow World” is experiencing a late growth spurt. Wasn’t long ago where if you didn’t own the LP, you didn’t hear this gem. And that’s a shame! The now familiar tune, recorded June 30th 1966 for Reprise Records, and released on the Dean Martin Christmas Album on October 11, 1966, wasn’t re-released into present day media until after 1998."

Wells tribs to our Dino singin' 'bout marshmallows are croppin' up all over the web this Dino-season. Just a few ago (see the Thursday, December 17th post) we shared Mr. Bob Rini's adulation of our Dino singin' 'bout the fluffy stuff on the Bob Hope winter small screen special (as you knows pallies that's my total Dino-fav version).

Today we share a Dino-testimonal given my Mr. John Gushue at his blogg cleverly tagged "John Gushue...Dot Dot Dot" (clicks on tagg of this Dino-post to goes there) how how his opinion of this Dino-winter-tune has changed over the years....to the point now he opines..."the song gets more charming with the years."

Mr. Gushue's thoughts simply echo our pallie Ed's wisdom 'bout Marshmallow World "experiencing a late growth spurt." Ain't it a kick in the head pallies to see how ever after 14 years of our Dino departin' this life his music, 'specially his Dino-winter-tunes are becomin' more and more celebrated and appreciated by pallies of all ages and stages.

Gushue continues by sharin' his affection for that special version of Marshmallow World done by our Dino and the frankie on that classic Dino-show winter special. And, of course he simply has to share that Dino-clip with his readers, as I am sharin' it here again this very Dino-day.

We speaks our Dino-appreciato to Mr. John Gushue for sharin' his transformin' experience with our Dino singin' the marshmallow tune. Dino-devotedly, DMP 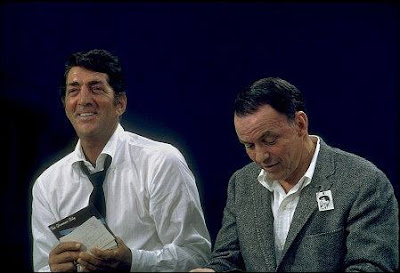 I spent many years not being particularly fond of It's A Marshmallow World, which struck me as kind of sappy and, well, silly. Maybe it's a function of getting older, and having a kid, but the song gets more charming with the years.

This version, with Frank Sinatra and Dean Martin from a Sixties Christmas special, appeals to me, largely because it reminds me of what TV specials were like when I was growing up: hokey, canned laughter, and what my dad would call fakey-fakey. Yet, it makes me laugh. The song appeared on the Christmas with the Rat Pack compilation that was produced seven years ago, to tie in with the resurgence of all things Frank that came with the Ocean's 11 franchise.

I'd like that calendar. What a great video on that marshmallow winter wonder-world.

Hey pallie, likes thanks for your faithful Dino-patterin' durin' the Dino-winter-month celebration here at ilovedinomartin...and yeah, our Dino and marshmallows just goes together....

That rendition of "Marshmallow World" is one of my all-time faves.

Hey pallie, thanks for droppin' some Dino-patter,....yeah nobody does the marshmallow song likes our Dino....Dino-seasonal greetin's to you Miss AOW...