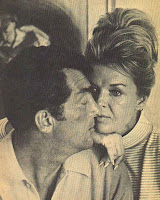 Coincidence: a striking occurrence of two or more events at one time apparently by mere chance. The announcement of Dino Family Trust, Universal Music, and The Bradford Exchange, and Jeanne Martin’s lawsuit against DMFT Executor Laura Lizer, is no coincidence pallies. Allow me to preface this rumination by saying that neither I nor anyone else knows the entire story regarding Jeanne’s financial situation, or the hidden fngers, if there are any hidden fingers, behind Jeanne Martin’s motives.

The consciousness of one Jeanne Martin was woken last week by the jingling of keys and the opening of the Dino-treasure chest of gold. The previous six years weren’t profitable enough for Jeanne Martin to peak out from the comfy solitary lifestyle that Dino has afforded for her. Nothing in the past monetary six years has been worthy enough for the ex-Mrs. King of Cool to voice concern.

Jeanne Martin believes the one time actress, current Executor of the DMFT, Laura Lizer has been stuffing her pockets with Jeanne’s money. Allow me to add a heaping tablespoon of reality. What she’s really saying is that Laura is stuffing her pockets with Dino-money, Dino-money in which Jeanne is an expert spender of. Evidently this sort of skimming has been occurring since the passing of the Dino’s prior manager Mort Viner some six years ago.

A pally might ask why this is all of a sudden an issue? I’ll tell you why my fellow Dino-zen. The past six years the fountain of Dino-money has been but a trickle, a drop in the Dino-bucket of cash-olla. The lack of Dino-treasure marketing allowed vast quantities of Dino-goods to sit dormant, non-profitable, locked up. One assumes that that sort of minimal Dino-cash trickle didn’t interest Jeanne. The promise of a new Dino-cash in a Dino-renaissance via the new Trust contract has awaken the mouse’s blondes ambition to be part of the Dino-legacy. This Dino-cash flow will no longer resemble a kitchen faucet, as much as a raging river. The Dino-vine has produced the biggest, juiciest grape yet, and the usual picker is lined up for their share of the juice.

Don't get me wrong. I’m all for those receiving their millions via wills, contracts, royalty payments, and divorce settlements. However when a certain party appears to pick and choose when to “speak up”, it's easy to feel that the only motive is for the Benjamins. If I may, can I suggest a more traditional method of making a buck? Please, Mrs. Jeanne Martin, please sit down with an author for a week and put memories to paper for the rest of world to know what it was like to be the woman behind the man. Or perhaps, if you haven't already, fire-up a tape recorder and put voice to tape. Consider it a thank you from you to Dino for the good times. We're not looking for a tell all personal diary, just your reflection of Dino as a tribute to the Dino-memory that deserves to be carried on. You may be surprised the attention it would garner. After all, it's the countless little rivers that feed into the big raging river. The Dino fans are the little rivers that feed into this raging river, and this Dino-river doesn't deserve to be damned.

Hey pallie, 'nother interestin' piece of Dino-prose....and an angle that I had not thought of....the Dino-connect between the recent Dino-pronouncement and the Dino-suit a la jeanne. Thanks for sharin' your Dino-opinion with us in your very personal and Dino-effective way....

My pleasure as always!

I haves a feeling that this is just the beginning.

i need a mort viner biography ! he was dean's manager for decades. so sad that he is gone. and gone some possible answers to my questions.
on deana's webpage is written "soon to be a movie" does anyone knows something about it ?